How Duleep Singh ‘handed’ it to the Queen

At a Supreme Court hearing on the Kohinoor issue on Monday, Solicitor-General Ranjit Kumar surprisingly stated on behalf of the Culture Ministry that “the diamond was neither stolen nor forcibly taken away”. 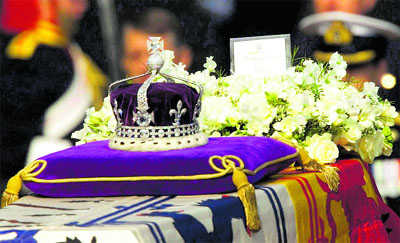 In this April 2002 photo, the Kohinoor, set in the Maltese Cross on the crown made for Britain’s late Queen Mother Elizabeth, is seen on her coffin as it is drawn to London’s Westminster Hall. AP/PTI

At a Supreme Court hearing on the Kohinoor issue on Monday, Solicitor-General Ranjit Kumar surprisingly stated on behalf of the Culture Ministry that “the diamond was neither stolen nor forcibly taken away”. Instead, Kumar claimed, the stone had been “gifted” to the East India Company by the former rulers of the Punjab.

The Supreme Court justices themselves then cautioned Kumar, advising that such a stance would threaten India’s ability to later stage any further claim to the diamond. This appears to have prompted the government to issue a new statement on Tuesday evening, in which it was asserted that their views had “not yet been conveyed” and that the Solicitor-General had merely “informed the honourable court about the history of the diamond”.

How could the Solicitor-General come up with his narrative, which is dramatically at odds with the records of Punjabi history.

One document in particular sealed the fate of Maharaja Duleep Singh, the Sikh Empire and the Kohinoor diamond in one fell swoop: the 1849 Treaty of Lahore. This treaty was presented to the Maharaja to sign after the Second Anglo-Sikh War of 1848-9, at a moment when an anti-British rebellion by Punjabi soldiers and ‘sardars’ had been clinically suppressed by the Company. This was a rebellion in which the boy king had himself played no part, but for which he was made to suffer the consequences, as the then Governor-General, Lord Dalhousie, had decided that he would no longer allow the troublesome nature of Punjabi independence to thwart British imperial ambitions in India. Dalhousie’s Secretary, Sir Henry Elliott, was duly dispatched to Lahore at the end of the war, and he told Duleep Singh and his courtiers that they were to sign away the kingdom without hesitation, or face much harsher consequences.

The treaty presented by Elliott to the boy Maharajah included clauses for the takeover of the Punjab and all its state property by the Company, as well making provisions for a life pension for Duleep Singh and his family. It also featured a distinct clause about the Kohinoor, which read thus: “The gem called the Koh-i-Noor, which was taken from Shah Sooja-ool-moolk by Maharajah Runjeet Singh, shall be surrendered by the Maharajah of Lahore to the Queen of England.”

If the Kohinoor was intended as a gift by the Maharajah to Queen Victoria, the use of the term “surrender” in this document would certainly suggest that it was given unwillingly, to say the least.

It would even seem that the British Queen herself was aware of Duleep Singh’s sensitivity on the issue – as can be seen from an account written by Lady Lena Login (wife of the Maharajah’s guardian, Sir John Spencer Login), who was present when Duleep was briefly reunited with his lost gem at Buckingham Palace, in the summer of 1854.

Lena Login wrote in her memoirs that the subject of the Kohinoor was deliberately not mentioned in Duleep Singh’s presence, since it was a painful reminder of the loss of his dynasty’s imperial sovereignty. However, the matter was brought up by the Queen soon after her first meeting with Duleep Singh, when she privately asked Lady Login whether “the Maharajah ever spoke of the Kohinoor, and if so, did he seem to regret it?” The Queen offered to show him the diamond once again, thinking that it might please her new Indian friend, but only after it had been ascertained by the Logins that it would not provoke an awkward or angry reaction from him.

A few days later, Lady Login stood spectator with great trepidation when the Queen surprised the Maharajah during his portrait sitting at the palace, bustling into the room with the diamond and several Beefeaters in tow. In a tale that is now famous, Duleep Singh reportedly trembled as he took the precious stone in his hand, gazing at it intensely and noting how it sparkled much more than before, but was also much smaller to hold since Prince Albert had ordered its re-shaping. Lady Login recorded her fear that he would hurl the jewel out of the window in a fit of rage, but this quickly melted into relief when, instead, the Maharajah turned and bowed low before the Queen, “expressing in a few gracious words the pleasure it afforded him to have this opportunity of himself placing it in Her hands.”

Perhaps this is what the Solicitor General is referring to as the “gifting” of the Kohinoor. However, the existence of a treaty and the presence of royal guards surrounding the Maharajah surely make it clear that this was far from a free-willed act, despite his dignified and magnanimous approach. What other choice did he really have?

One wonders what good a relatively narrow debate over a wretched stone could provide for healing the long-lasting wounds inflicted by British imperialism on South Asia; but if we are going to have one, let our legal authorities at least do their history homework before getting on with it.

The writer is reading for a DPhil in History on nineteenth-century Anglo-Indian royal relations, at Lady Margaret Hall, Oxford.