How global warming is singeing the region

The situation in the region calls for an early correction of the distortion in the ecological front. Crop production and dairying activities will be adversely affected if there is no mitigation of the harmful effects of climate change 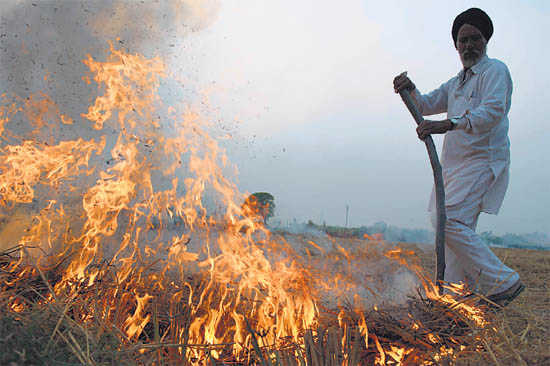 Despite warnings, farmers in the region continue to pollute the environment by burning crop residue and paddy husk. AFP

There is climate change in India as well as at the global level, as reflected in the general rise in temperature (expressed as global warming). According to various reports, there has been a 2 degree centigrade rise in temperature at present, compared to pre-industrial revolution period (since the 17th century). Further projections peg the change at a rise of average temperature between 1-2 degree centigrade, both in minimum as well as maximum levels, during the period of 2020-2050.

The rise in temperature has already led to fast-receding glaciers in the Himalayas. Any further rise in temperature may lead to extinction of glaciers in the Himalayas, leaving several perennial rivers without water in the dry season. These rivers provide water for irrigation in the flood plains of the Indus, Ganges and Brahmaputra river basins. The extinction of glaciers will deprive the whole of Asia of water from the present snowcap of Tibet, that supplies it water around the year. The snowcap of Himalayas, also known as the third pole, controls the climate pattern and rainfall not only in Asia but also in the entire world. This will change the seasonal pattern of rainfall, leading to long dry spells in the traditional rainfall season and flooding during non-rainfall seasons.

Climate change is accompanied by fast-rising pollution and deteriorating quality of  surface as well as groundwater resources. In the case of Punjab and Haryana, the Planning Commission of India and the Indian Council Agricultural Research (ICAR) reports have provided mapping of contamination of groundwater resources, location of contamination and poisoning variety in the water. There is also poisoning of soil due to uncontrolled use of chemicals, especially insecticides and pesticides. This has led to enhanced contamination of foodgrains, fruits and vegetables, milk, meat and poultry products.

The greed for maximisation of profits leads producers to externalisation of costs and internalisation of benefits. The consumers of these products bear the cost through more spending on healthcare out of their own pockets, while producers reap the benefits of high income by disposing of effluents in the soil, water and air. Openly burning of crop residues in the post-harvest period, in blatant violation of government orders, is a reflection of this tendency. Pollution of soil, water and air has negatively affected the health of the people in this region.

The situation in the region calls for early correction and any delay in effective intervention will cost this region a heavy price in the form of threat to all forms of life, be it human beings or plants, species of animals, insects and birds. Several plant varieties and bird species have disappeared in the recent period of 30 to 40 years. If the harmful impact of climate change is not fully mitigated, it will affect  agricultural crops. According to the estimates of the Punjab State Action on Climate Change 2012, the changes were projected to negatively affect wheat production by(-) 4.6 to (-) 32 per cent in the state. The other crops expected to have negatively effects from the climate change are cotton, maize and rice.

This will also negatively affect the lactation period and productivity of hybrid cows, leading to fall in milk production in the state. As per estimates of the International Food Policy Research Institute (IFPRI), there will be a decline in production of foodgrains in India from the present level during 2030-2050, due to early maturing of crops if full mitigation of climate impact is not done. The negative effects will be compounded by unseasonal rainfall, drought, hailstorms, floods and pest attacks. The increased frequency of crop damages will add to risks and vulnerability of farmers and agriculture.

The capacity of the small and marginal framers to face risks of crop loss is very limited. In the absence of a fair mechanism of compensation to the farmers, the viability of the poor farmers will be seriously undermined. This will generate pressure on the state governments to compensate the farmers for crop loss, thereby further putting stress on the depleted financial resources of the governments. This provides the rationality for taking necessary steps for mitigation of climate change impact. The governments must become active on this front and earmark a considerable part of their budgets to meet the challenges of climate change. The reading of present plans or programmes of the governments in the region on climate change does not convey any serious efforts to combat it, be it in terms of finances committed or proposals prepared.

The process of climate change is induced by human activities which have been interfering with the natural processes on the earth in a big way. Paul Crutzen was the recipient of the 1995 Nobel Prize for showing widely used chemicals that have been destroying the ozone layer in earth's upper atmosphere with potentially catastrophic effects for all forms of life. In his Nobel Prize lecture, he had said that it was “utterly clear that human activity had grown so much that it had begun to interfere with the natural process”. This necessitates that checks are put on such activities and on use of deadly chemicals which are interfering with the natural processes of the earth. These include use of chemicals destroying the ozone layer, control of carbon emission by industrial, transport and thermal power-generation activities. The activities causing water pollution, its contamination and water depletion and air pollution need to be kept in check. The growing carbon emissions are leading to the green-house effect, with consequences of global warming. Carbon emissions represent the heart of the problem of climate change, therefore, targeting of carbon emission reduction is a necessary task.

The shifting of emphasis from thermal energy to cleaner sources like solar, wind and hydro energy is the right course. In order to help the ecological system to regenerate, forest cover must be increased to one-third the area of the country. The burning of biomass in the fields must be stopped. A mechanism must be created where farmers are induced to collect biomass for energy generation and the production of compost manure by providing them remunerative returns on a commercial scale. This activity is worth subsidising from the environmental perspective.

There is need to impose green tax on activities which contribute to environment degradation. The polluters from affluent sections must be charged on progressive scales for carbon emissions and resources collected from green tax must be used for the protection and regeneration of environment.

On environment issues, countries and regions need to avoid the trap of nationalism and chauvinism in wake of discussions on global platforms. The newly emerging economies like India can avoid the mistakes made by the advanced countries of environment degradation in the course of development, by taking steps for environment protection. This will save advanced regions like Punjab and Haryana from arsenic contamination of water as shown by recent reports.  Purpose of economic development is to raise standards of living and ensure a healthy, enlightened life. Promotion of environment protection is a necessary condition  to build a healthy, prosperous society.

The writer is a Professor at CRRID, Chandigarh.