How the Rafale deal was struck

Deluged by military analyses of PM Narendra Modi’s decision to buy 36 Rafale fighter planes and its political fallout, it has completely been lost sight of that the plan to acquire French aircraft had a high foreign policy dimension. 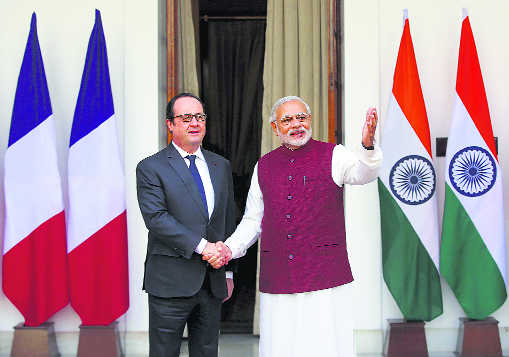 Side by side: France has stood by India, be it on N-tests or the Kargil conflict.

Deluged by military analyses of PM Narendra Modi’s decision to buy 36 Rafale fighter planes and its political fallout, it has completely been lost sight of that the plan to acquire French aircraft had a high foreign policy dimension. Rightly, it was not solely defence-related considerations that influenced the purchase.

Shortly before French President François Hollande was to arrive in New Delhi in January 2016 as chief guest for Republic Day, Modi, frustrated that his intention to purchase 36 Rafale aircraft nine months earlier was not going forward, called a meeting of principals in the negotiations. The mood at the meeting was uncertain and indecisive.

Price was still an issue, there were conflicting views on what lay beyond inking the deal during Hollande’s visit and there was no clarity on the presumed public sector partner of Dassault Aviation in the offset arrangements. The only certainty at the meeting was the firm stand by the Indian Air Force that it desperately needed fighter aircraft, and quickly.

There were no ‘single-handed’ bureaucrats at the meeting. Typically, the civil servants who spoke hedged their remarks with ‘on the one hand… and on the other….’ The Prime Minister sensed that this meeting would be a waste of time, a non-starter. Modi had specifically instructed that Mohan Kumar, India’s ambassador in Paris, should be invited for the meeting. But Kumar had not said a word, because he was the junior-most officer at the table and was diffident to offer his opinion without being asked.

Modi looked at Kumar and asked: ‘Aapki rai kya hai? (What is your opinion?)’ ‘Sir, this deal is very important for France.’ He could not go on to the next sentence because he was rudely interrupted by Nripendra Misra, Principal Secretary to the PM. ‘You are India’s ambassador to France, not the French ambassador to India,’ he curtly tried to silence Kumar.

But Modi quickly came to the ambassador’s rescue. ‘Mohanji, theek keh rahe hain (Mohan is right).’ ‘The French were the only people who stood by us when we tested the nuclear weapons in 1998,’ Modi continued. ‘Even the Russians opposed us and told Brajeshji (Brajesh Mishra, the PM’s special envoy) as much when he visited Moscow after the tests. The Russians changed their mind only after the tide began to turn in India’s favour.’ The PM gave a long lecture to the assembled bureaucrats on India’s imperatives in foreign policy and linked it to the Rafale purchase.

He said the French had been sensitive to India’s needs when the Vajpayee government had its back to the wall and gave support at every turn after the nuclear option was exercised. India, too, had to be alert to French sensitivities now. If the deal was important for France, and since the planes met the specifications of our Air Force, the ambassador’s views had to be considered.

Modi had done his homework. He quoted from cipher telegrams sent by Ranjan Mathai — who was ambassador in Paris — in 2007 after Dassault Aviation placed its bid for 126 medium multi-role combat aircraft in August of that year. Mathai, who later became Foreign Secretary, had familiarised himself with Rafale at air shows in France and had given his impressions in those telegrams. Mathai also stressed India’s strategic imperatives in aligning with France as a diplomat with a ringside view, stationed in Paris.

As it often happens at such meetings, once a PM lets it be known which way he is leaning, civil servants who used both hands to argue their point suddenly become ‘single-handed’. To cut a long story short, an MoU on the purchase of Rafale planes was signed during the French President’s visit. Diplomatic imperatives played only a part, but a significant one. Because other elements were integral to the deal, it took eight more months to unlock the complexity of technical and price negotiations. The final steps to seal the deal were completed only on September 23, 2016.

It is a great loss to India’s diplomatic archives that Brajesh Mishra, India’s first National Security Adviser, did not write his memoirs which would have been a treasure trove of episodes about some of the momentous years in India’s history. Fortunately, Mishra, who loved good things in life, shared several of those tales with those he trusted on many spirited evenings. Therefore, we know that in the initial days of the Kargil war in 1999, when Pakistanis had a worrying advantage on the heights, the French executed on an emergency footing the adaptation of IAF Mirages to equip them with Israeli laser-guided bombs, which were secretly delivered in Srinagar. Without such French support, Pervez Musharraf could well have gotten the better of this country.

Between the two series of nuclear tests on May 11 and May 13, 1998, there was only one foreign affairs delegation present in New Delhi. It was led by the Secretary-General of the French foreign ministry, Bertrand Dufourcq. While almost the entire world condemned the tests, imposed sanctions or pulled out their High Commissioners from New Delhi, Dufourcq extended an invitation to Mishra, then Principal Secretary to Vajpayee, to visit Paris. When Mishra reached Paris, his first stop abroad to explain Pokhran II, it was a national holiday. But President Jacques Chirac took him on a long walk on the grounds of the Elysee Palace. Chirac said France would stand by India, but advised Mishra that in order to end India’s nuclear winter, he would have to work on the Americans. The rest, as they say, is history.

In arguing the foreign policy rationale for buying Rafale jets, Modi has been acutely aware that if India now has a respected presence at the Group of Twenty summits, it is originally owed to the French who broke new ground in 2003 by inviting Vajpayee to the G-8 summit in Évian-les-Bains. This invitation was the seed which germinated as today’s G-20.