THE Pulwama and Balakot incidents have pushed into the background the report of the Comptroller and Auditor General (CAG) on the Indian Air Force (IAF) acquisitions, of which the Rafale deal hogged the limelight. 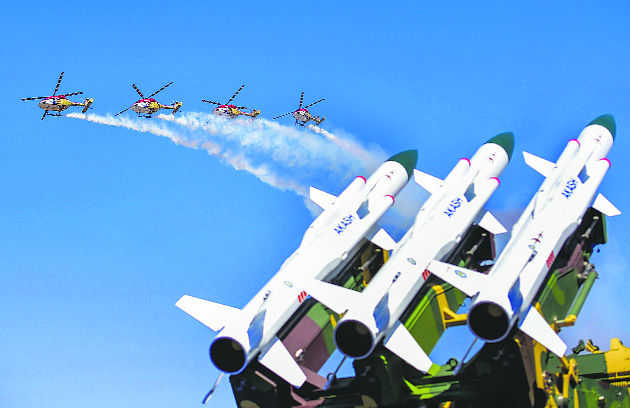 Imperative: Hard power, in quality as well as quantity, is the key to building deterrence to avert future Pulwamas.

THE Pulwama and Balakot incidents have pushed into the background the report of the Comptroller and Auditor General (CAG) on the Indian Air Force (IAF) acquisitions, of which the Rafale deal hogged the limelight. Despite the favourable Pulwama end state being achieved, albeit temporary, there is an imperative that needs urgent government attention. Tucked away in the CAG report is a cry beseeching a look into what one may call ‘defence distress’, paraphrasing the term from the agrarian and farmers’ distress that every politician is talking about. The last two are vote banks which no politician can be reticent about, as they are leveraged through morchas, hartals and strikes. Unfortunately, when defence distress strikes, it is deadly, and often ‘fatal’ in a way. The Balakot incident demonstrated resoundingly that India has had enough of Pakistan’s support to terrorism; however, it should not divert our attention from the fact that defence pangs are a reality and the tell-tale signs should be recognised and acted upon. There are three pointers that need elaboration; though IAF examples are discussed, the issues are valid for other defence forces too.

Critiquing sub-optimal defence procurement procedures, CAG has commented that the non-conclusion of a usage contract precluded the use of the flight simulator for the C-130 Hercules aircraft till 2016, despite it being ready four years earlier. In the interim, India lost five air warriors and a multi-million-dollar aircraft in 2014, attributed to a training issue. This is the first pointer — lack of empathy and understanding of an operational requirement  due to bureaucratic procedures and attitudes (remember, the simulator was fully ready). In any other country, where the political and bureaucratic climate is cognisant of military urgencies, many heads would have rolled.

The second pointer is of an intangible kind, which, if neglected, shows up with deadly results later. The HAL-built HPT-32 trainer was grounded in 2009 after many accidents, 13 of which were fatal. Many red flags had been raised about the stone-like gliding quality of the HPT after an engine failure (a frequent occurrence). The IAF had pulled along till the proverbial straw fell on the camel’s back and we lost two flying instructors at the Air Force Academy (AFA). The HPT was grounded, throwing the training profiles of rookie pilots into bedlam, and for the next few years a sub-optimal training pattern on the HJT-16 Kiran was followed. The emergency purchase of the Pilatus aircraft revolutionised training; AFA’s flight line was chock-a-block with the gleaming new trainers till 2017 or so when, due to non-finalisation of maintenance contracts, a severe lack of spares ensued. This is the situation even now, as per media reports. However, training has to continue to ensure a regular pilot feed for frontline squadrons and one is sure that cannibalisation (shifting) of spares among aircraft is being done and extension given to parts whose life is expiring. The situation must be similar for some other fleets, too, as many acquisition and upgrade programmes have been inordinately delayed, a fact stated by the Air Chief last month. This unacceptable situation is the second indicator of a serious problem, where lack of funds could be pushing reliability of war- fighting equipment towards an unsafe zone, which may translate into tragic results later.

The third warning is where op-preparedness starts getting affected. Under-equipping of the Indian Army was one of the major causes of the 1962 China debacle. At a recent conference, tears welled up in a retired Lt General’s eyes while narrating the humiliation the armed forces had felt then. “Thank God for the subsequent 1965 Indo-Pak war that brought back some self-respect,” remarked the General. After 1962, the government funded an accelerated re-equipping plan and the victory in the 1971 war bears witness to that effort. However, as per recent media reports, we are on the downslide again with a shortage of fighter squadrons and many critical items; soldiers’ rifles are having to be imported by the fast-track route, ammunition is in short supply, and sniper rifles, Naval helicopters and MiG-29 fighters for the IAF are planned to be imported too. But will these just remain plans, as this year’s defence acquisition budget is insufficient even for previously concluded contracts? Answers to these pointers have a bearing on what happens hereafter.

Will the post-Pulwama happenings deter Pakistan? The answer is an emphatic no. It is time to remember Bernard Brodie, the doyen of strategic thought, who said, “Avoidance of blackmail can be achieved only by demonstrating that our readiness to accept risks need not be and is not less than the blackmailer’s.”

History shows that adversaries cannot be reformed as per one’s wish but have to be coped with through management strategies in which hard power is vital to prevent blackmail. Addressing defence concerns (though not a vote catcher) is an imperative first step to ‘manage’ Pakistan and simultaneously weigh against China. While short-term responses after the Pulwama attack will be implemented, long-term solutions require tons of money and decades of time spread over many governments. Of the three attributes that determine deterrence to prevent blackmail — resolve, capability and capacity — the Balakot incident demonstrated the first two; the third, dependent on an indigenous arms base, is in short supply. Politicians of all hues need to put their shoulders to the wheel and address defence preparedness in a bi-partisan manner — indigenous defence R&D and manufacture must be kickstarted. Hard power, in quality and quantity, is the key to building deterrence to avert future Pulwamas. Can every political party elaborate, in its election manifesto, what it would do to address defence preparedness? That would indeed be welcome.