AS part of its golden jubilee celebration, the Supreme Court brought out a book, “Supreme But Not Infallible” — a collection of essays contributed by eminent persons. 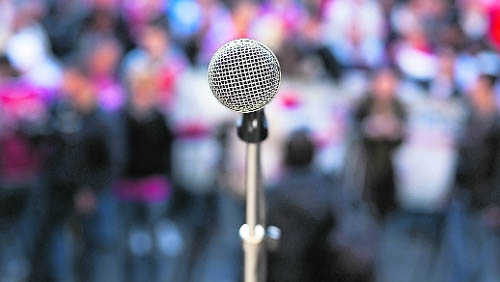 Clam up: Freedom of speech is at the core of a democracy and must not be trifled with.

AS part of its golden jubilee celebration, the Supreme Court brought out a book, “Supreme But Not Infallible” — a collection of essays contributed by eminent persons. Whenever the court pronounces an unacceptable judgment, the words of David Pannick come to mind. In his book, “Judges”, he says: “Judges are mere mortals but they are asked to perform a function that is truly divine.” To err is human. Errors can be corrected by larger Benches. The author of the judgment is a highly, competent and respected judge. Even the best of judges sometimes deliver verdicts which are out of date.

Senior advocate, Dr Rajeev Dhawan, who along with me, Subramanian Swamy and others challenged the validity of Sections 499 and 500, IPC, responded saying that the defamation law went against the spirit of the freedom of speech. Satya Prakash, legal editor of The Hindustan Times, commented: “If justice hinges on truth, SC needs to reconsider its defamation verdict.” More reactions on the same lines will follow. Dissatisfaction with the judgment is writ large.

One interesting feature of this case is, three national leaders who rarely see eye to eye with one another fought shoulder to shoulder, challenging the validity of the offence of defamation. Subramanian Swamy argued himself. Rahul Gandhi and Arvind Kejriwal were represented by lawyers. It was a big fight. The legal battle is lost, not the war. Hopefully, the verdict will be reconsidered sooner than later.

Another unusual feature is, though the case involved substantial questions of law as to the interpretation of Articles 19(1), (2) and 21 of the Constitution, requiring adjudication by a five-judge Bench, two judges decided it. Yet another exceptional feature is the Bench has expanded the scope of restrictions on the right to free speech, instead of widening the ambit of the right. Larger Benches have always expanded the scope of fundamental rights and narrowed the restrictions. For example, the right to freedom of speech and expression has been held to include freedom of the media and the citizens’ right to know the background of the candidates contesting at an election, their assets and liabilities, criminal antecedents and qualifications. In the very first case on freedom of speech and expression, filed by Romesh Thappar, a Bench of six judges had declared: “Very narrow and stringent limits have been set to permissible legislative abridgement of the right of free speech and expression, and this was doubtless due to the realisation that freedom of speech and of the press lay at the foundation of all democratic organisations, for without free political discussion no public education, so essential for the proper functioning of the processes of popular government, is possible.” A Bench of two judges has now expanded the scope of restrictions on the ground of ‘defamation’, inhibiting freedom of speech.

In the 19th century, sitting in the cool comfort of Ootacamund, Lord Macaulay drafted the Indian Penal Code with a separate chapter on ‘defamation’, modelled on the law of England. Most laws of the Commonwealth countries, including India, have their roots in the Acts of British Parliament. The irony is even though British Parliament repealed criminal defamation in 2009, and enacted the Defamation Act 2013, providing for compensation for defamation, our Supreme Court has upheld this archaic colonial law, long after it was abolished in the land of its origin. Criminal defamation ought to have been buried deep when India became a democratic Republic.

The first article of faith of Mahatma Gandhi was ‘truth’. The motto of the Supreme Court is Satyameva Jayate (truth will triumph). However, Section 499, IPC, says truth is no defence to the offence of defamation, unless “it be for the public good”. As a rule, subject to very few exceptions, truth ought not to be regarded as defamation at all. Instead of placing the burden on the complainant to prove that the offending statement is untrue, before issuing summons, the Penal Code requires the accused to prove not only that his statement is true, but also that it is for public good.

Subramanian Swamy demonstrated before the court how he was being harassed by being dragged to different courts in different corners of the country. The complaint against Rahul Gandhi was filed by an RSS member in far away Bhiwandi. For making unpalatable speeches, even mediapersons, actors and other public figures are exposed to motivated criminal prosecutions in far-flung courts. Whenever a complaint is lodged, the Magistrate tends to issue summons routinely, requiring the attendance of the accused in court in person, driving the accused to seek bail. The attendance of the accused is not at all necessary in court at that stage. The Form of Summons prescribed in the Code of Criminal Procedure gives the accused an option either “to appear in person or through pleader”. The Supreme Court could at least have issued a general direction to all Magistrates not to insist on personal appearance of the accused, except for recording his evidence in the trial and permit appearance through counsel.

Experience shows that most prosecutions for defamation are motivated by political or private considerations and are not in public interest. The only solace in the entire judgment is the mild observation that “summoning of an accused in a criminal case is a serious matter and criminal law cannot be set into motion as a matter of course. When the remedy of civil suit for damages is available, why should this undemocratic law be allowed to continue?”

This is not the first case where the Supreme Court has given a disappointing verdict. Another Bench of equally respected judges upheld Section 377, IPC, which penalises homosexuality. Now, a larger Bench of five judges is due to reconsider the issue. Earlier, a Bench of nine judges in Indra Sawhney’s case permitted reservations based on caste in government jobs and admissions to professional courses, with two judges — Justices Kuldeep Singh and RM Sahai — dissenting, saying that caste cannot be the basis for reservations under our Constitution which aims at a casteless society. Caste-based reservations obstruct the promotion of fraternity among all citizens. Forward castes are now pressing for inclusion in backward classes. The unity of the country is at stake.

The writer is an expert on constitutional law