India is drying up, fast 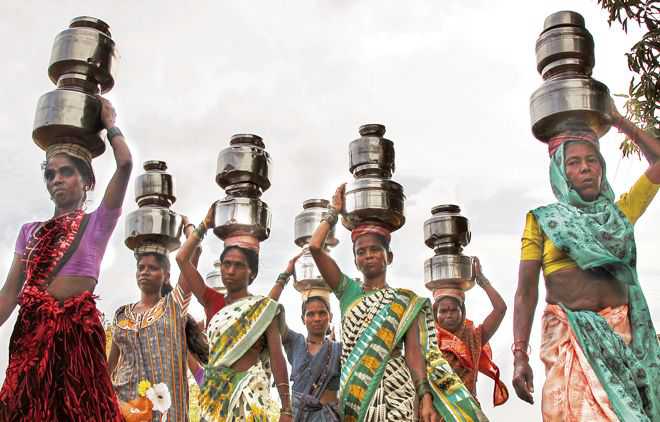 Every counts: With 43 per cent of the country engulfed in a drought, about 600 million people are reeling under its fury.

Congratulations to all... we have achieved 50 degree temperature this year. Let’s cut more trees to achieve 60 degrees the next year,’ a sarcastic tweet the other day came as a jolt. It was, however, hard to tell whether the quiet sarcasm was lost on a majority of the readers who are following Twitter or had made more and more people sit up and think.

Whatever had been the impact, the fact remains that while 2018 was the fourth hottest year on record in the past 140 years since the world began to keep a track on temperatures, NASA expects 2019 to be still hotter. The heat is therefore on. In India, a 22 per cent deficit has been recorded in pre-monsoon showers in the months of March, April and May — the second lowest in the past 65 years — and with monsoons delayed by a fortnight or so, daily temperatures have been sizzling. Churu in Rajasthan has already crossed 50°C thrice this season, and even Delhi burnt at an all-time high of 48°C.

With nearly 43 per cent of the country engulfed in a drought, an estimated 600 million people are reeling under its fury. With temperatures soaring, water sources going dry, parched lands staring as far as one can see, ‘hundreds of villages have been evacuated as historic drought forces families to abandon their homes in search of water’, reports The Guardian. In Maharashtra’s Ahmednagar district, such is the wrath of a continuing drought that over 50,000 farmers have shifted to 500 camps meant for cattle. There are 1,501 cattle camps in Maharashtra, where 72 per cent of the area is faced with a drought. Reports say village after village around the capital city of Mumbai has been deserted. More than 88 per cent of Karnataka is somehow surviving under a severe drought. With 156 of the 176 talukas declared drought hit, Karnataka has faced 12 years of drought in the past 18 years.

Karnataka’s economic survey for 2018-19 projects a growth rate of minus 4.8 per cent in agriculture.  Therefore, while drought has taken a heavy toll on standing crops and also crippled the farming-led economic activity, not only in Karnataka, but also in nearly half the country, adequate attention is finally coming to the declining groundwater levels. With the conundrums of water conflicts between states, between communities within a state, and as well as individuals standing in queues increasing over the years, policy makers are now realising the importance of conservation. Already the alarm has been raised with a recent report by Niti Aayog warning that 21 cities — including the four metropolises — Bengaluru, Chennai, Hyderabad and Delhi — will run out of groundwater by 2020. Since groundwater provides for 40 per cent of the water needs, about 600 million people may be hit.

But the problem of groundwater depletion is not only confined to the cities. In fact, it is because of the unbridled exploitation of groundwater that even a short dry spell turns into a more destructive drought. At most places across the country the rate of depletion exceeds 0.5 metre a year and often touches 1 metre. Add to it the reduced availability of water from shrinking rivers; the resulting water crisis has reached worrying levels. Reports say the water availability from the mighty Narmada has declined, from 30.84 million-acre ft in 2007-18 to 14.80 million-acre ft in 2017-18. The Ministry of Water Resources estimates water levels in 91 reservoirs falling to 18 per cent of their capacity. Moreover, water from numerous dams is being diverted from agriculture to meet the needs of the urban areas, including drinking water. This has added to farmer protests, leading to rural-urban conflicts.

Over the years, the emphasis shifted from water conservation, water harvesting and groundwater recharge. Revival of traditional water bodies, which could have played a major role in drought-proofing, received lip service. Restoration of ponds and measures for recharging groundwater remained incomplete, abandoned or preceded at a slow pace. There still exist close to 2 lakh traditional water bodies, ponds and tanks across the country which need to be revived. In Punjab, where 110 of the 138 blocks are in the ‘dark zone’ (over exploited), the revival of the 15,000 ponds and traditional water bodies could not only help in recharging groundwater, but also providing irrigation. So far, only 54 such ponds have been rejuvenated. Strangely, even in Rajasthan, instead of reviving the excellent water conservation structures perfected over the ages, the emphasis is on drip irrigation. Not even a drop of rainwater was allowed to go waste in these baoris. In Karnataka, an estimated 39,000 traditional ponds and tanks existed. While nearly three-quarters of them have dried up, encroached upon or turned into sewage dumps, there is still a sizeable number that can be revived. Meanwhile, Karnataka has launched a jalamrutha scheme under which the traditional water bodies would be rejuvenated. But the pace needs to be hastened.

Although Karnataka is trying to preserve the kalyanis, and Odisha has the kutta and munda water systems, the traditional wisdom association with water harvesting has been more or less lost. Several years back, travelling to Texas A&M University, I was surprised to see the traditional water harvesting structures of Tamil Nadu being followed. The Centre for Science and Environment had published a book, Dying Wisdom, listing all traditional harvesting systems.

In the age of borewells, the emphasis has to revert to traditional harvesting. Recharging the depleting groundwater in a sustainable manner is urgently required. But this cannot be in isolation. Destroying forests, water bodies, catchment areas in the name of development must cease. Otherwise, crossing the Rubicon may turn out to be catastrophic.