Balakot, Triple Talaq and Article 370 represent some of the recent events in the BJP’s repertoire that dominate the political discourse today. 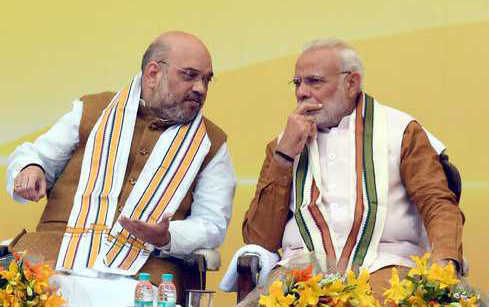 Balakot, Triple Talaq and Article 370 represent some of the recent events in the BJP’s repertoire that dominate the political discourse today. The BJP’s resounding win in the 2019 Lok Sabha elections clearly symbolised the continuously shrinking space for the opposition in today’s politics. The results further made it clear that any road to recovery for the opposition would pass through some really tricky waters. For any chance of revitalisation and improved electoral fortunes, the opposition would have to put out a planned, consolidated and perhaps joint fight to oppose the BJP. However, what has happened since May 23 has been the complete opposite, with the BJP dominating the news cycle every day, and the opposition losing ground every second.

After their shambolic performance in the 2019 general election, the Congress headed towards a near three-month shutdown as their president Rahul Gandhi vowed to resign. The entire Congress machinery opposed this decision, with the old guard and loyalists combining to convince Gandhi to reverse his decision. After a few months, when it was completely clear that he was not going to change his stance, the Congress Working Committee (CWC), the apex decision making body of the Congress, met just for the second time since the election results in August to find a solution to this kerfuffle. Their ‘ground breaking’ solution was to appoint former president, Sonia Gandhi as the interim president, however, only time will tell how ‘interim’ this move will be. For a party that has lost trust with the masses, such a status-quoist move is hardly going to inspire confidence and capture the imagination of the people. Many even argued that the Congress should have followed the Conservative Party’s approach for finding a successor to Theresa May, holding an internal election involving all their cadres and committees, a process that would have got the workers and volunteers enthused, along with increasing the prominence of the Congress party in the news cycle and general discourse. This would have been a welcome change from their daily bashing in these spaces. However, the forces in the CWC thought it best to use their discretionary powers instead.

The sun doesn’t seem to be shining on the other opposition parties either. With most of them struggling to form a cohesive presence on the ground, facing defections in the Rajya Sabha, Vidhan Sabha and state units as well. Members of the SP have resigned from the RS, the NCP has faced mass defections from its Maharashtra state unit. The TMC in West Bengal has lost several leaders to the BJP over the past few months as well. For the Congress, the season of defections hasn’t seemed to have stopped since 2014, recently two-thirds of the Congress Legislature Party in Goa defected to the BJP, 15 MLAs resigned from the Congress-JD(S) alliance in the Karnataka Vidhan Sabha leading to the alliance losing its majority and the BJP sweeping into power. In Tripura, the Congress state chief has just resigned citing the toxic culture in the organization. Adding to the chaos, Ashok Tanwar, the former Haryana Congress president also resigned from the party just before elections in the state. Apart from the defections, another major complication for the opposition parties and the Congress specifically has been the wrath of the Enforcement Directorate, Central Bureau of Investigation and Income Tax. A sudden sequence of raids, summonings and court hearings seem to come up against their leaders, especially senior leaders around election and campaign times. This poses a grave challenge to the opposition’s already weakened resolve and isolates their leaders further as beyond a point no politician can counter the state machinery. Thus, the combination of defections compounded with the raids and trials have further derailed the opposition.

On the other hand, in almost another paradigm, the BJP continues its meteoric rise. The monsoon session has seen them pass bills that have fulfilled their long-standing goals and objectives, with the Triple Talaq Bill and the Abrogation of Article 370 ensuring huge political victories and strengthening their hold over the electorate. The passing of these bills has aggressively galvanized their cadres and support base, making them view the BJP to be a party that ‘walks the talk’. The monsoon session has further established the supremacy of Modi-Shah, further enabling the duo to dictate political discourse and be viewed as the supreme unquestionable strong men of Indian politics, cementing their authority at the very top of the pyramid. The monsoon session was also followed by the Prime Minister’s trip to the United States, the main feature of the trip was the Howdy Modi event in Houston, Texas, where even the US President Donald Trump made an appearance. The event was used to highlight the fantastic relation that the two leaders share and stress on the strengthening of Indo-US ties under the BJP. Trump even referred to Modi as his ‘friend’ and how India has never had a better friend in the White House. Modi even went to the extent of openly supporting him for re-election, not minding the possible future diplomatic consequences of that. Despite this apparent bonhomie, the much talked about trade deal between both the countries has still not seen the light of day.

Further, the Modi US trip received extensive and relentless coverage from the Indian media, almost being reported like a 24-hour reality show, receiving real-time, minute to minute coverage, the extent of which would even make celebrities envious. Apart from the news, social media was also dominated by the talk of Howdy Modi and the PM’s trip to the US. BJP supporters further viewed it as a portrayal of a ‘strong’ India, where even the US President makes exceptions for us. Overcome by the grandiose scale and optics of it all, their unrelenting support and faith in the PM and BJP has been substantiated exponentially, to heights that have perhaps not been seen before. The US trip, along with the bills passed in the monsoon session have made the BJP and in particular the PM dominate the mainstream news cycle, social media trends and WhatsApp forwards, the BJP has been able to ensure a complete capture of the mind space and imagination of the Indian citizen, almost enamoring them with their politics and ideology. With a campaign blitzkrieg that has begun for the forthcoming assembly elections in Maharashtra and Haryana, the BJP will be able to further dominate discourse by specifically extolling on their ‘heroics’ from the previous parliament session and the PM’s trip to the US. In such a scenario, the impending rout of the opposition is almost certain, with their organizational troubles, rapidly shrinking support base, leaders’ defections and near absence from the political discourse, there is little scope for them to re-capture BJP’s hegemony over the electorates mind space and imagination. Leaving a radically shrinking space for the opposition in India’s current electoral discourse. Without an effective opposition, democracy suffers the most.