Indo-US defence trade not free from encumbrances : The Tribune India

The deepening strategic engagement between India and the US is driven to a considerable extent by the direct purchase of military hardware by India through the Foreign Military Sales (FMS) programme of the US Government. 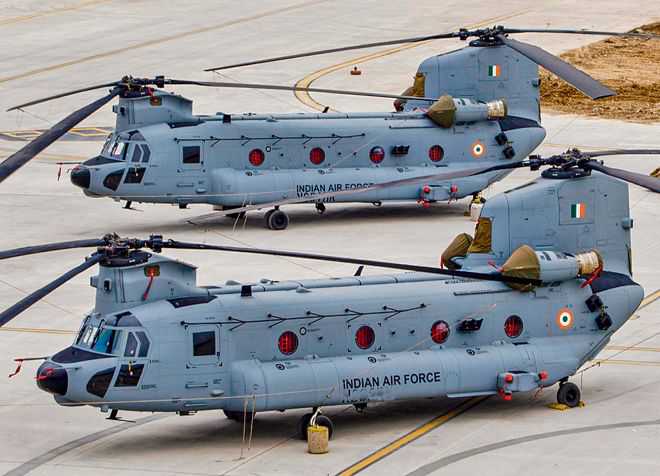 Volume of sales: India has bought military hardware worth $15 bn from the US.

The deepening strategic engagement between India and the US is driven to a considerable extent by the direct purchase of military hardware by India through the Foreign Military Sales (FMS) programme of the US Government. The total volume of sales is estimated to have gone up from a near-zero just about 15 years back to more than $15 billion at present. Many new deals worth billions of dollars are in the pipeline. According to the Stockholm International Peace Research Institute, the US was the third largest supplier of arms to India during 2014-18, after Russia and Israel.

Three factors could rain on this parade in the coming years, though.

First, the money. The persistent gap between the budgetary support sought by the armed forces and the actual allocation made year after year indicates that the availability of funds in the short-to-long term is going to be an issue. Last year, the gap was of the magnitude of Rs 1.12 lakh crore. It may not be much different this year. The cash crunch could impact the outcome of several proposals that are currently being discussed under the broader Indo-US security cooperation framework.

Second, the Countering America’s Adversaries Through Sanctions Act (CAATSA) of 2017 continues to cast a long shadow over the Indo-US defence trade. The Equipment Development Department of China was sanctioned in September 2018 for purchasing the S-400 air defence system from Russia and now Turkey has thrown up a new challenge by receiving earlier this month the first of the same system. This leaves the US with very few options vis-a-vis India, which too has signed a deal with Russia for this system and has categorically refused to scrap the deal.

Any sanction imposed on India could disrupt the execution of the ongoing contracts and endanger future contracts. Even if a one-time waiver is granted for the purchase of the S-400 system, it is unlikely to solve the problem. Many other deals have been signed or are under negotiation with Russia. A significant percentage of the defence equipment held by the armed forces is of Russian origin and will remain in service for several decades to come, engendering continued dependence on Russia. India cannot be expected to seek a waiver of prior clearance for every deal, already signed or under negotiation. If nothing else, it would not make for good optics. Statements like the need to ‘wean’ India away from Russia have not helped.

The issue is anyway not confined to the procurement of military equipment from Russia. There is the Iran factor too. India’s rolling back of oil imports from Iran under US pressure endangers its strategic interests in the Chabahar port.

The signing of two foundational agreements — Logistics Exchange Memorandum of Agreement (LEMOA) and Communications Compatibility and Security Agreement (COMCASA) — and the possibility of other such agreements being signed has cemented the strategic engagement between the two countries, but, combined with several other bilateral measures, it also entrenches India into the larger US military strategy, which may not always coincide with India’s global perspective.

It is difficult to imagine how it is in India’s interest to spoil relations with Russia and Iran, endanger its long-term strategic interest in Iran which provides a gateway to Afghanistan and central Asia, and be seen as a part of the strategy to contain China. The impact it could have on a major defence partner like India was evidently not factored in while enacting CAATSA.

The National Defence Authorisation Act for the current fiscal passed by the US Senate earlier this month contains a proposal to bring India on a par with the NATO allies. This is flattering, but it may not change the calculus of India’s strategic interest vis-à-vis Russia and Iran, thus leaving the CAATSA issue hanging like the Damocles’ sword and casting a shadow on the new deals.

Third, despite several rounds of simplification and streamlining, the procurement policies and procedures continue to confound the vendors, both Indian and foreign. Textual ambiguities in the procurement manuals, delay in resolving the issues that come up before the award and during the execution of contracts, the long time it takes for a procurement programme to fructify, the absence of a policy to facilitate the implementation of contracts rather than focusing on penalising the vendor for default and the frequent retraction of tenders are some of the several factors that militate against ease of doing business with the MoD.

The US companies supplying equipment through the FMS programme administered by the US agencies seem to be facing the heat while executing those contracts in India and discharging the offset obligation incidental to the main contract, for both of which they have to deal directly with the MoD. The adoption of the Strategic Partnership model by the MoD to give a leg-up to defence manufacturing in India complicates the matter further for the US and other foreign players. The problem does not seem to be poised for an early resolution.

While the ball is in the MoD’s court insofar as the first and the third issues are concerned, a delay in finding a long-term solution to the CAATSA issue could trump everything else.