Infallible leaders? Blame it on the bhakts

WHEN one reads about the rise of many 20th-century authoritarian regimes in history, there are two questions that confound you. 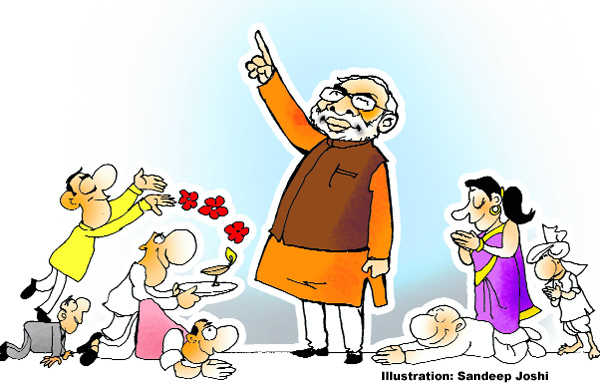 WHEN  one reads about the rise of many 20th-century authoritarian regimes in history, there are two questions that confound you. How did entire nations and populations allow themselves to be so hypnotised by a person or a political party? Moreover, how did they permit leaders or regimes to take absolute control over the State and then chip away at their liberties one by one, so that they could hold sway with an iron grip for decades thereafter?

The process is even more inexplicable and intriguing in countries that were once democracies. We are not talking of military coups or civil wars here. We are talking of democratic takeovers of power, which eventually degenerated into authoritarian reigns, even if for a short period of time.

In the wake of the twin surgical strikes  — across the LOC and now demonetisation — when one sees the prevailing atmosphere, one wonders if this is how the process begins unfolding. Where people start ceding individual liberties for some chimerical greater good; where the regime does not even have to oppress, just unleash a vicious, emotional rhetoric and outsource the suppression to a large number of citizens who have suspended independent thinking and thus can be depended upon to cow down the questioners. The demonetisation of Rs 500 and Rs 1,000 notes, for instance, has been aggressively touted as a master stroke against everything from black money to terrorist funding to counterfeit money to corruption, while also being hailed as a major reform towards a cashless economy. Any criticism of it, is almost considered blasphemous, even anti-national. If this sentiment was being stoked only by the government or party in power, it  would be understandable, although undesirable propaganda. What makes it really scary is that ordinary middle-class citizens, especially those of the social media variety, have started behaving like accomplices of the regime by shouting down, mocking and denouncing any contrary views, branding these as unpatriotic.

Moreover, even the shoddy and shockingly inept planning and execution of the demonetisation exercise is being defended as inevitable. We are being exhorted to treat it as our patriotic duty to suffer long queues, inconveniences, disruptions to our lives, genuine problems caused by this man-made crisis, without complaining or criticism. So is our brainwash complete? Have we become so mesmerised by the larger-than-life aura of a leader that we refuse to believe that he and his government can do any wrong? Have we forgotten what Dr Ambedkar warned about political bhakti? Don't we realise that there is a very thin line between the use and abuse of power.

In fact, bhakti makes political leaders believe in their own infallibility, inflates their self-opinion as men or women of destiny. Time and again, history has shown that there are no strong, authoritarian regimes which did not end up doing more harm than good to their countries. Many of them did so because of their popularity. Because people and nations put more faith in them than they should have.

Popularity has almost never ever chastened any politician, except very rare exceptions — a Nehru, a Mandela. But most of those who have relied on personal appeal over everything else, have eventually led their nations to grief, when their self-belief descends into megalomania. Almost always that megalomania is fed by popularity and fawning bhakts. The bhakts create an echo chamber, which resounds only with what the leader wants to hear and believe, totally shutting out different viewpoints and realities. Modi and his party won a majority single-party mandate for the first time in 30 years in 2014. Even if grudgingly, one has to admit that his personal popularity has remained high, despite many questions that still remain unanswered. That there is an authoritarian and majoritarian streak cannot be denied.

In the case of the surgical strikes along the LoC, his party and he exploited nationalistic and strong-man sentiments to the hilt. In the case of demonetisation too, we have seen him play the brave, lone-crusader card, the selfless, sacrificing leader rhetoric and the emotional, “suffer-for-me-and-our country” appeal. All of this points to his tendency to personalise all his government's decisions to make his regime seem almost presidential in nature and help to build his image as a towering, decisive leader.

The kind of leader he is for time to tell. Many people have bought his spiel hook, line and sinker, while others are sceptical. Whether his regime turns into a democratically elected one with autocratic tendencies, especially if he gets a second term, depends on his bhakts. People are free to support and adore the Prime Minister but they must realise that love for one's country is completely different from love for a particular leader, party or a government. They have no right to attack, browbeat and brand as unpatriotic those questioning the policies of their beloved leader. If India turns less-than-democratic once again, blame it squarely on the bhakts. Any leader derives his delusions from the reflections seen in the distorted mirrors put up by his fanatic supporters.