It is easier to kill than to understand : The Tribune India

It is easier to kill than to understand

The root of ‘satyagraha’ is prayer. 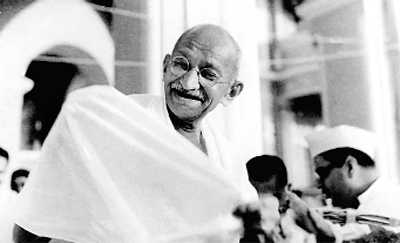 Mahtama Gandhi: It is difficult to understand him and easier to kill him.

Professor of sociology at JNU

The root of ‘satyagraha’ is prayer. It teaches us the art of living as well as dying. Birth and death are inevitable among mortals. What distinguishes man from the brute is the conscious striving to realise the spirit within. -MK Gandhi

Nathuram Godse — the killer of Gandhi — represented some sort of militarised Hindutva: a hyper-masculine ideology of militant nationalism nurtured by the likes of Vinayak Savarkar; and it was not in tune with Gandhi's spiritualised politics. But then, there are others who are never tired of hating Gandhi, abusing him and ridiculing him. Is it that a bit of Godse exists in many of us, even in his opponents? Or is it that Gandhi disturbs us deeply, and we feel safe by negating him rather than engaging with him?

Possibly, the answers are complex. However, one thing is certain. It is difficult to understand him, walk with him; it is easy to kill him. Why is it so? There are two reasons. First, Gandhi wanted us to be self-reflexive; and this is something we are not used to because we tend to believe that the problem lies elsewhere — in the 'system', in the ‘external enemy’. However, for Gandhi, no battle against the outer forces can succeed without self-purification: the continual process of working on one's body, food, sexuality, consciousness and self. No wonder, as his simple yet symbolically nuanced text Hind Swaraj indicates, swaraj or freedom means self-rule, or the cultivation of 'soul force' which, as he felt, could give us the politico-ethical power to resist the civilisation that colonial modernity brought with it: the way with its ‘brute force’ it disempowered us, intensified our dependence on external agencies like ‘lawyers and courts’, and caused ‘indulgence’ with what contemporary theorists would have regarded as market-induced ‘false needs’. The task, as he was never tired of saying, was not merely to replace the white rule by the brown rule; the real challenge was to create a new man free from the aggression of the coloniser and the wound of the colonised, a moral man endowed with the capacity to live in harmony with nature and the self-sustaining local community. Gandhi seemed to be immensely demanding; and there was always a sense of discomfort with him.

Likewise, not many could truly appreciate his approach to the caste question. While Ambedkar’s radical politics of mobilisation of the marginalised castes for fighting ‘Brahminical Hinduism’ and ‘annihilating’ caste was well known, Gandhi’s approach was somewhat different, but equally relevant. Through his own life practice and 'experiments' in his ashrams, he sought to overcome exclusionary practices and transcend ‘purity-pollution’ dichotomy by integrating the mental and the manual, and emphasising ‘productive labour’ as an integral component of emancipatory education. The seeds of casteism or hierarchical consciousness, Gandhi felt, could be eradicated through this ethical transformation. This emphasis on moral practice and self-transformation is not easy to appreciate because we are in a hurry in search of instant solutions.

Second, not many are ready to appreciate Gandhi's critique of the dominant notion of masculinity and courage. Take, for instance, the radical Marxian notion of revolution: its mythology of heroism overthrowing the bourgeois state by guerilla warfare. Or see our ordinary human response: violence can be fought only by counter-violence. Not solely that. The psychology of violence is equated with the dominant imagery of masculinity; and love, care and forgiveness are seen as 'feminine passivity'. With his ‘Christianised’ self illumined by the Sermon on the Mount, Gandhi saw non-violence even in the Bhagavadgita. Kurukshetra, for him, is a site of inner struggle, and Krishna is our ‘soul force’ healing Arjuna — the disturbed self, torn between light and darkness, good and evil. No wonder, Gandhi could make things upside down, and rescue the spirit of courage from the burden of masculinity. In ahimsa, patience and art of dying, Gandhi found the new weapon of resistance against an unjust order. Think of Gandhi with his frail body walking through the villages of Noakhali, burning with communal hatred, and trying to restore peace while constantly working on his inner world. It was in this sense that the realm of politics became the site of his sadhana or spiritual practice. An ideal satyagrahi, Gandhi would have argued, is more like a spirited mother rather than a reactive/impatient aggressor. As violence is normalised in our life — in the making of 'nationalism', in the practice of 'development', in militarisation and terrorism, and in the sanctification of hyper-masculine ‘heroes’ or ‘martyrs’ — it becomes exceedingly difficult to appreciate the hollowness of this culture.

Gandhi was no God. He was candid enough to acknowledge his own follies and contradictions, his failures and psychic turmoil. Moreover, even a sincere admirer of Gandhi ought to engage with the critical questions raised by the Marxists, Ambedkarites and feminists, and see the limits to the Gandhian worldview as far as the adequate understanding of the political economy of capitalism, the practice of caste hierarchies and the construction of gender identities are concerned. But then, is there any radical thinker — Marx, Ambedkar and Phule included — who has answers to everything? In fact, his limitations and ambiguities made him humane. The point is that these limitations notwithstanding, humane/vulnerable/yet determined Gandhi emerged as a refreshing departure at a time when colonialism, imperialism and war characterised the West, and in the process of decolonisation, India was striving for the recovery of her soul.

Today, as we find ourselves amidst the social Darwinism of global capitalism and violent conservatism of religious nationalism, we have begun to see ourselves as reckless consumers and militant nationalists with a sort of militarised consciousness. No wonder, the ruling class ideology would like to kill feminine/austere/dialogic Gandhi's spirit. The ultimate irony is that with a sense of guilt, we would museumise him in the official calendar art, or in the form of routinised speeches delivered by the political class on October 2 and January 30.