Under the headline “Law needed to verify netas’ wealth: SC”, The Tribune reported (April 2, 2016) as follows: “Parliament should make a law. This is an area of the legislature where we can’t get in,” a Bench headed by Chief Justice TS Thakur told PIL petitioner Julio Ribeiro, who sought a directive to the Election Commission to get every such declaration verified…. 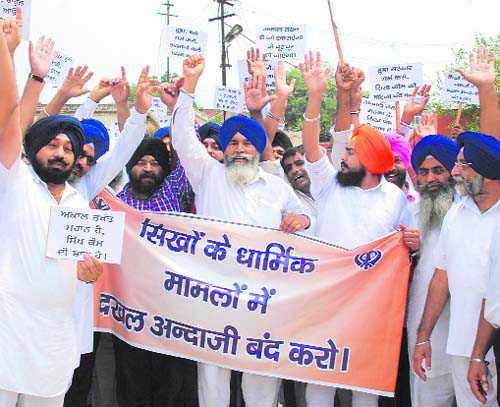 A case against the SAD was adjourned between February 2014 and August 2015 seven times without mentioning any reason. tribune photo

Under the headline “Law needed to verify netas’ wealth: SC”, The Tribune reported (April 2, 2016) as follows: “Parliament should make a law. This is an area of the legislature where we can’t get in,” a Bench headed by Chief Justice TS Thakur told PIL petitioner Julio Ribeiro, who sought a directive to the Election Commission to get every such declaration verified…. Dismissing the PIL, the SC nevertheless advised Ribeiro to join hands with other eminent personalities to pursue the issue at other appropriate forums.”

There are two lapses here. One, the order as pronounced in the court and recorded seem to be different. The second lapse is more serious. The courts have often resorted to stating that “Parliament should make a law.” It is widely known, however, that in matters of electoral and political reforms, Parliament and parliamentarians are not willing to make a law. There are far too many instances to list here.

The Supreme Court seems to have overlooked an observation made by one of its own three-judge Benches in Union of India vs Association for Democratic Reforms (2002), which said that from “Cumulative reading of a plethora of decisions of this Court as referred to, it is clear that if the field meant for legislature and executive is left unoccupied detrimental to the public interest, this Court would have ample jurisdiction under Article 32 read with Articles 141 and 142 of the Constitution to issue necessary directions to the executive to subserve public interest.”

It is clear that the petition by Ribeiro and others was squarely covered by the above observation but the Bench shied away from defending public interest.

There is another, more serious, case going on, actually dragging on, in the Delhi High Court which is a quintessential example of judicial tardiness. Petitioners in the case claim that the Shiromani Akali Dal (SAD) obtained its registration with the Election Commission of India (ECI) through a fraud and have prayed to the court to cancel the registration.

The matter began in September 1996, when a complaint was filed with the ECI seeking cancellation of the registration of the SAD due to the alleged filing of false undertaking and forged constitution by the SAD under Section 29-A of the Representation of the People Act (RP Act). Nothing much happened. Another person, Balwant Singh Khera, filed a complaint in September 2004 with the ECI, seeking cancellation of the registration of the SAD due to its violation of an undertaking provided to the ECI under Section 29A(5) of the RP Act, by contesting elections to the SGPC, a purely religious body. Once again, nothing noteworthy happened despite repeated correspondence. Khera moved a writ before the Supreme Court in January 2007, seeking appropriate directions to the concerned authorities to de-recognise/de-register the SAD (Badal), in view of its violation of the undertaking under Section 29A(5) by its alignment with religious bodies such as the Shiromani Gurdwara Parbandhak Committee (SGPC) and the Delhi Sikh Gurdwara Management Committee (DSGMC). The Supreme Court did not entertain the petition and asked the petitioner to go to the ECI again. The ECI passed a simple, non-speaking order on January 1, 2008, stating “the Commission does not find any ground for action as urged by Petitioner”. Khera set out to collect decade-old records from the ECI under the Right to Information (RTI) Act, and based on information gleaned from them filed a fresh petition with the Delhi High Court on February 24, 2010.

The hearings in the Delhi High Court proceeded in the usual course, with the SAD resorting to all sorts of delaying tactics. As the proceedings dragged on, arguments were heard over several hearings in 2013. A curious pattern then started to emerge… that of the court adjourning the matter on its own. There were at least seven occasions between February 2014 and August 2015 when the recorded order of the court simply said “Renotify on xx.xx.xxxx,” without mentioning any reason.

Finally, the court reserved its judgment on November 5, 2015. When the judgment did not come through, the matter was mentioned in the court on February 9, 2016, when three months had passed after the judgment was reserved. This was done as the Supreme Court had laid down guidelines in 2001 in Anil Rai vs State of Bihar (1998) wherein it had inter alia deprecated the practice of keeping matters pending for too long after pronouncing “judgment as reserved” and had allowed litigants to file applications after the passage of three months to find out the status of the judgment in their case. The court decided to list the case for March 16, 2016. By this time the case had been listed 24 times!

On March 16, the matter was listed for April 5, 2016. On April 5, the case was heard for a few minutes beginning around 12.45 pm, and was adjourned to be continued after the lunch break. After lunch, the Bench passed the following order: “List the matter before another Bench of which the Chief Justice is not a member,” and listed the case for April 21, 2016.

The facts — repeated adjournments when neither party had requested them, not giving the judgment even after more than three months of reserving it, conducting part hearing of the case just before lunch and then recusing oneself immediately after lunch — are certainly intriguing and make one wonder about what exactly was going on.

Exactly these facts came up for discussion in the hearing on April 21. The lawyer for the SAD brought to the attention of the court an interview that the lawyer for the petitioner had given to a social media website, listing out the progress (or lack of it) of the case, implicitly claiming it to be an attempt at interfering in the administration of justice. The court pointed out to the SAD lawyer that if a Bench transfers a case more than three months after reserving the judgment, after asking for and getting clarifications, and without giving any reason, “in an aspirational society, it is legitimate for people to wonder what happened, and to raise and ask questions.” The court concluded the matter saying it did not have any bearing on the judicial aspects of the case and listed the case for May 5 for arguments.

The political establishment and political parties in particular have a long history of not wanting to follow any law, and whenever a serious attempt has been made to subject them to any law, they have moved to amend the law to suit them. The list of such attempts is long, starting with adding an explanation to Section 77 of the RP Act in 1974 to give a free rein to spending during elections to amending the same RP Act in 2002 to prevent disclosure of criminal background of candidates contesting elections. The current defiance of the order of the Central Information Commission bringing six national political parties under the RTI, and the surreptitious attempt to amend the Foreign Contributions (Regulation) Act (FCRA) by including an amendment in the Finance Bill, 2016, to protect the BJP and Congress from the Delhi High Court judgment that has held them guilty of violating the FCRA, are the latest on-going examples.

While the attempts of the political class to keep themselves out of the ambit of the law of the land can be understood as crass self-interest, the prevarication of the judiciary in cases related to political issues is baffling. Given that the executive and the legislature have obvious overlaps and their interests can be common, if the Judiciary does not perform its role as the third pillar of the State, the system of checks and balances which is critical to the health of a constitutional democracy will cease to exist. And that would not be good for the nation. The judiciary, therefore, must make sure such lapses do not occur.

The writer is a former Professor, Dean & Director in charge of the Indian Institute of Management, Ahmedabad.

The views expressed are personal.