Lack of vision for Punjab : The Tribune India

Lack of vision for Punjab

Punjab — the land of five rivers, a harbinger of the Green Revolution, the sword arm and sheet anchor of the country against terror and the wars inflicted by our neighbour — stands reduced to a “debt-stressed” state with no roadmap in sight to lift this once numero uno state of the country out of its present morass. 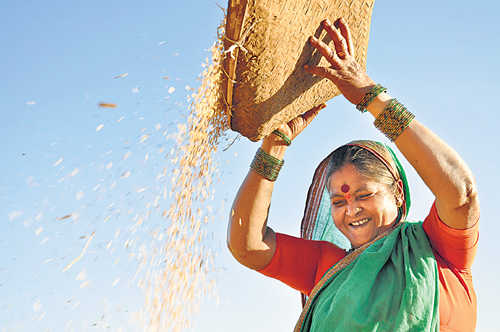 Agriculture has registered a negative growth rate of 0.5 per cent

Punjab — the land of five rivers, a harbinger of the Green Revolution, the sword arm and sheet anchor of the country against terror and the wars inflicted by our neighbour — stands reduced to a “debt-stressed” state with no roadmap in sight to lift this once numero uno state of the country out of its present morass. Known for the valour of its people, their zest for life and deep commitment to inclusion and plurality collectively defined as “Punjabiyat”, the state stares at an uncertain future. With almost 70 per cent of its youth afflicted by drugs, an unemployment rate higher than the national average, its agricultural economy in decline, its water resources contaminated and depleting, a high level of pollution and environmental degradation exposing its people to life-threatening ailments, chronic malgovernance and a seemingly irreversible politics of vendetta make for a potent cocktail of a failing state.

Even so, Punjabis have continued to persevere, hoping time and again that their representatives entrusted with the task of charting a course for their future will not fail them.  This hope stands belied once again. The Punjab Budget for 2015-16 presented by the Finance Minister recently demonstrates an utter lack of clarity and vision for the state’s future and a callous disregard for the welfare of those who exist on the margins. Indeed, his proposals fail the test of both prudence and compassion considering the enormity of the challenge as evident from the facts and figures disclosed in the official documents. The debt liability of the state is of the order of Rs 1.24 lakh crore with the state's own revenue earnings projected at Rs 29,351 crore next year, an increase of barely 3 per cent from Rs 28,560 crore in 2014-15. The committed liabilities of the state on salaries, pensions and interest payments are expected to eat into almost 70 per cent of the state’s revenue receipts. The annual interest liability alone is projected to be Rs 9,900 crore officially qualifying the state as “debt stressed” in terms of the criteria specified by the 12th Finance Commission. The primary sector, which mainly comprises agriculture, has registered a negative growth rate of 0.5 per cent with thousands of farmers reported to have committed suicide on account of crushing indebtedness. The state has been unable to derive any benefit from the Centrally funded schemes meant for the benefit of the poor and for establishing the necessary physical infrastructure on account of its inability to contribute the minimal matching allocations out of its own revenues. The pittance of Rs 30 crore allocated for combating the drug menace and to prevent the smuggling of drugs from across the border demonstrates a cavalier attitude to a critical problem.  One fails to discover in the layers of the Budget documents and the accompanying memoranda any meaningful resource allocation for securing the environment and for promoting science and technology as instruments for the state's economic and social renewal. Concrete and deliverable initiatives to address the challenge of waterlogging in southern districts of the state, allocations for meaningful interventions to make available potable water to the state's population in many districts or purposive schemes for the industrial development of the border districts of Amritsar, Gurdaspur and Ferozepur are conspicuous by their absence or glaring inadequacy.  Healthcare services continue to languish both because of want of requisite infrastructure in the rural and semi-urban areas and on account of the unavailability of qualified medical staff. The challenge of haphazard urbanisation with its grave attendant consequences for the quality of life of lakhs of Punjabis has not been adequately addressed.

Malgovernance and misfeasance at various levels have negatively impacted the perception of potential investors and the investment climate generally. While the trading and business community continues to be weighed down by taxes and an oppressive tax administration, the possibility of further investments in the small and medium sector of the state's economy appears bleak.

Thus, in the overall context, the question that can be legitimately posed to the government is whether it can do enough in the years ahead to: (a) wean youth from drugs by creating adequate avenues for their employment; (b) create the requisite physical and social infrastructure that would boost manufacturing, industrial development, economic growth and employment; (c) contain diseases such as cancer in some parts of the state; (d) protect and preserve the environment to safeguard the future of our children; and (e) rescue our farmers from penury and the resultant misery. Given the Budget as it is, the answer must clearly be in the negative.

While electoral democracy in the state has consistently asserted itself, the role of reason in policy formulation stands entirely supplanted by unsustainable populism at the cost of the state's future. The formidable challenge of ensuring the state's economic revival and its social cohesion presupposes a shared commitment and the broadest political consensus on such issues as rationalisation of the use of water resources, diversification of the state's agricultural economy and urban renewal. This would require the fostering of healthy democratic traditions in which ideological rivals are not viewed as personal foes to be vanquished by all means, fair or foul. We need to nurture dialogue, discussion and contestation of ideas in an atmosphere which is not compulsively adversarial and is free from rancour. We must embrace a political culture in which power is not pursued for its own sake, but is sought to be justified with reference to the ends to which it is applied. The state needs political leadership which must “spring from a compulsion to do what is right” so that it is invested with moral authority to muster the support of the people on a vast scale. Our leaders must show a largeness of heart with only public welfare at the centre of all their exertions. Finally, we need a leader “who can put into words the will of his age, tell his age what its will is, and accomplish it…” (Hegel).

The writer, a Congress MP, is the Chairman, Parliamentary Committee on Science and Technology