Though the recent local fidayeen action in Letapur could well be a one-off incident, it has caused enough concern. The localisation of the composition of suicide squads is something that experienced J&K hands have always feared. 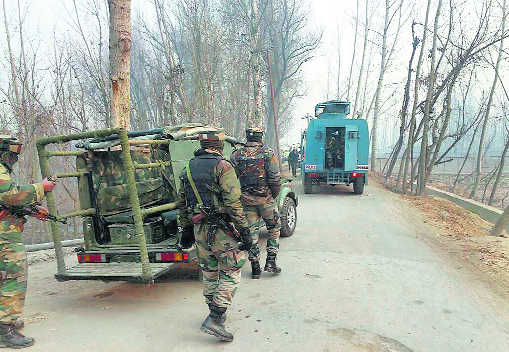 ON the last day of 2017, three well-armed terrorists intruded the Central Reserve Police Force (CRPF) training complex at Letapur, near Avantipur on the Anantnag-Srinagar road in Kashmir. In the ensuing attempts to neutralise them, five CRPF jawans were martyred and all three terrorists were killed, but not before offering stiff resistance which included firing some armour-piercing munitions seen for the first time in the hands of terrorists. Post-operation analysis revealed that two of the three terrorists were local Kashmiris.  The death of Fardeen Ahmad Khanday, the 16-year-old son of a policeman, and Manzoor Baba, both locals from South Kashmir, revealed a new ploy by the Pakistani Masood Azhar terror group Jaish-e-Mohammad (JeM), under the guidance of the Pakistani proxy controllers: that of inducting local Kashmiris into fidayeen suicide squads. This is a phenomenon rarely seen in the 28-year-old proxy war.

In J&K's bleak proxy conflict scenario, the term fidayeen came into being in 1999. It is borrowed from the lexicon involving the vocabulary of the Palestinian resistance against the Israeli Defence Forces (IDF) and supposedly alludes to those”who sacrifice themselves in the name of god”. Before commenting on the entry of local terrorists into the ranks of a JeM fidayeen squad, the entire concept of fidayeen in J&K set up by proxy controllers of Pakistan needs to be outlined.

It was in1999 (10 years after the proxy conflict commenced in J&K) that the situation in J&K really came to a head. Till then, terror in the state flowed and ebbed; from only local terrorists in 1989-90 to the introduction of foreign mercenaries, made available after the end of the Soviet-Afghan war, to the drying up of that pipeline in 1996 and thence the dominance of the Pakistani terrorists.

In May 1999, a larger Pakistani strategy unfolded with the Kargil intrusion. It forced the redeployment of some formations of the Indian Army, deployed in the Valley for counter-terror operations (CT), to the Kargil sector, vacating the space in North Kashmir and segments of the South.

In July 1999, infiltrated Pakistani elements along with a few SSG regulars, launched a series of small two- to four-men squads to sneak into the camps of the security forces (SF) and their bases through the weak perimeter security that existed. Some smart ruses were also used to target sentry posts employing effective disguise as Indian soldiers. The intruded elements inflicted as many casualties as they could and came equipped for the long haul and eventual death. Some high-profile actions included the targeting of the 15 Corps PRO offices near the Batwara entry gate, headquarters of Rashtriya Rifles (RR) units and sectors and civil institutions.

In December 2000, the Srinagar airport was targeted by a six-man squad of the Lashkar-e-Toiba (LeT); all six were killed at the gate along with six brave CRPF personnel. In all these cases, the fidayeen suicide squads comprised Pakistani terrorists infiltrated into the Valley or in the Jammu region. These actions did succeed temporarily in placing the Indian SF on the defensive with deployment of greater resources on the perimeter and entry point security of establishments. Counter-measures for these were partially found, but mostly resulted in limiting damage rather than preventing terrorist actions. Only in a few recorded cases had local Kashmiris, mostly acting alone, conducted such operations; a car bomb blast at the HQ 15 Corps gate and another against an Army bus in 2000 and 2003, respectively, were the handiwork of local elements.

Fidayeen as a concept faded through the years of this millennium until it got revived after July 8, 2016, the fateful day in the history of the proxy war when BurhanWani, the young Kashmiri terrorist leader was killed.

A strong counter-infiltration posture was adopted by the Indian Army 2004 onwards after the LoC fence came into being. This has progressively made it much more difficult for proxy controllers to induct trained and motivated Pakistanis willing to sacrifice their lives for the radical Islamic cause for which they have been brain washed.

Besides these, suicide missions which intend to achieve something out of proportion in Kashmir need to be executed by extremely well-trained and equipped terrorists. They needed to be infiltrated from the PoK and kept secure in safe houses before being moved to the target area for execution. This could take many months with considerable risk, unlike in the Jammu-Kathua segment where actions could be much faster.

The localisation of the composition of fidayeen suicide squads makes the missions easier but also requires religious fervour in the youth volunteers. It is something that experienced J&K hands have always feared. Such religious motivation is already evident in much of South Kashmir in particular, where radical Islam is known to have found root and mosque power is high.

Training camps for local terrorists are known to exist well away from the surveillance of SF, in the higher reaches around Tral, Kulgam and Shupiyan. Local terrorists (LT) have been recruited, motivated and trained; their movement is far less difficult than that of FTs as they can merge and receive much greater local support.

Although the Letapur fidayeen action could well be a one-off incident, it has caused enough concern. That is because with ready availability of LTs willing to be a part of fidayeen squads, the scope of multiple strikes enhances much like the campaign in 1999-2003. This and the employment of armour-piercing munitions would considerably transform the nature of conflict with VIP security and security of all establishments, HQs and units becoming far more vulnerable.

Pakistan's proxy conflict managers and controllers continue to improvise whenever necessary. The natural next step that can be perceived as part of potential devious planning by the Pakistan deep state could well be the preparation of human suicide bombing squads making use of highly radicalised and alienated young locals. This is the concept employed in Afghanistan, Iraq and Pakistan. The experience of foreign armies has shown that for this threat usually there are least counters.

It may be premature yet, but the Indian SF must be trained and geared to face such threats which the Pakistani deep state could bring to bear. The fidayeen threat from local youth will remain in place unless the counter-radicalisation process meets some success and alternatives are provided to wean away the youth from the path of self-destructive violence.

Recent events have shown that some youth who picked up the gun did return to normal life after appeals by their parents. It had created hope and some cheer among the SF. However, the Letapur incident has brought in a new challenge for which social handling skills and greater outreach to parents and youth alike is necessary with the help of professional counsellors.