SEVERAL countries, some which are acknowledged as democracies, and some which claim to be, have celebrated 800 years of the Magna Carta, a document which arguably marked the primacy of the “rule of law” in the functioning of a society. 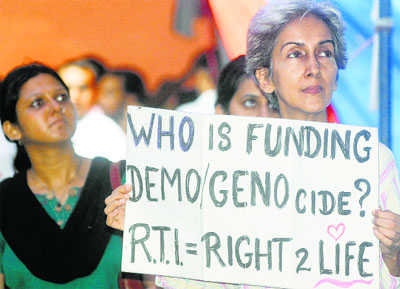 Application of law is inconsistent and patchy in India. RTI activists protest in Delhi. Tribune photo

SEVERAL countries, some which are acknowledged as democracies, and some which claim to be, have celebrated 800 years of the Magna Carta, a document which arguably marked the primacy of the “rule of law” in the functioning of a society. It was on June 15, 1215 that 25 barons forced the then king of England and a part of France, King John, to agree to follow the “rule of law”. Magna Carta is not unknown in India as it is often mentioned as the original source of Article 21 of the Constitution of India (“No person shall be deprived of his life or personal liberty except according to procedure established by law”). Though the exact expression “rule of law” is not specifically mentioned in the Constitution, the concept pervades the document. It has, as a matter of fact, been declared to be one of the features of the “basic structure” of the Constitution, implying that even Parliament cannot amend this feature of the Constitution. But does the “rule of law” actually work in India?

While the expression “law will take its own course” is often heard in public discourse, particularly when a big-wig is suspected of wrong-doing, there is also widespread speculation that the law discriminates between the rich and the poor, the powerful and the powerless, and so on. So, the best that can be said is that application of law is, or can be, somewhat inconsistent and patchy. Irrespective of what is said above, there is one exception and that is consistent. There is one entity in India which is above Magna Carta, to which the laws of the land do not apply. And this entity is called political parties.

The laws in question that do not seem to apply to political parties are the Right to Information (RTI) Act, 2005, and Foreign Contributions Regulation Act (FCRA), 1976 and 2010.

The RTI Act was passed unanimously by the Parliament. The highest body to administer this is the Central Information Commission (CIC). On June 03, 2013, a full bench of the CIC said, “it is held that AICC/INC, BJP, CPI(M), CPI, NCP and BSP are public authorities under section 2(h) of the RTI Act…The Presidents, General/Secretaries of these Political Parties are hereby directed to designate CPIOs and the Appellate Authorities at their headquarters in 06 weeks time. The CPIOs so appointed will respond to the RTI applications extracted in this order in 04 weeks time.

Besides, the Presidents/General Secretaries of the above mentioned Political Parties are also directed to comply with the provisions of section 4(1) (b) of the RTI Act by way of making voluntary disclosures on the subjects mentioned in the said clause.” Being above the Magna Carta, none of the six political parties complied with the above decision of the highest statutory body administering the RTI Act, nor did any of them approach any other legal forum to challenge the decision. They just ignored it.When complaints of non-compliance were lodged with the CIC, it issued notices to the six political parties to explain why the decision had not been complied with. CIC's notices, given more than once, were also simply ignored. After holding a number of hearings, the CIC decided on March 16, 2015, more than 20 months after the initial decision, that “the respondents are not in compliance with the Commission's order of 03.06.2013 and the RTI Act. The respondents, as public authorities, have not implemented the directions contained in the Commission's order and there is no evidence of any intention to do so.”

Since the CIC specifically mentioned that there was “no evidence of any intention” on the part of the political parties to comply with the decision, their being above the law of the land, in this case the RTI Act, is obvious.It is, of course, a sad commentary on the working of the CIC that is also said that “the Commission is bereft of the tools to get its orders complied with” despite the provisions for the imposition of penalty and the award of compensation in the RTI Act which the full bench of CIC, in their wisdom, decided not to invoke. This part of the CIC's decision is now under appeal in the Supreme Court.The second instance is of the FCRA. On March 28, 2014, the Delhi High Court held that it had “no hesitation in arriving at the view that prima facie the acts of the respondents inter-se, as highlighted in the present petition, clearly fall foul of the ban imposed under the Foreign Contribution (Regulation) Act, 1976.” The respondents under reference were the Indian National Congress and the Bharatiya Janata Party (BJP). The court further said that the Election Commission of India (ECI) and the Union of India (represented by the Home Ministry, which administers the FCRA) “would relook and reappraise the receipts of the political parties and would identify foreign contributions received by foreign sources as per law declared by us hereinabove and would take action as contemplated by law.”

The court also said that the decision “shall be complied within a period of six months from date of … the … decision.” Since the court had given six months for the implementation of the decision, the ECI wrote to the Home Ministry in July, 2014 saying that since the Representation of the People Act, 1951, had no provision to take action against political parties for accepting foreign funding which they are prohibited from accepting under the FCRA, and the Home Ministry is the administering authority for the FCRA, the Home Ministry should “take action as contemplated by law.” As far as in known in the public domain, no action has been taken against the political parties so far.

In the meanwhile, both parties have appealed to the Supreme Court against the High Court. But since the Supreme Court has not stayed the decision of the High Court, there is no known reason for the ministry for not taking action against the two political parties as stipulated in the FCR Act, except that political parties are above the Magna Carta.

The inescapable conclusion from the two instances given above is that all political parties are above the law of the land in India. So, does Magna Carta work in India?

The writer is a former professor, Dean, and Director In-charge of Indian Institute of Management, Ahmedabad. The views expressed are personal.