Making the CDS effective is crucial

Prime Minister Narendra Modi’s announcement on August 15 that India will have a CDS to head the Army, Navy and Air Force for further sharpening the coordination between the forces was a big surprise. 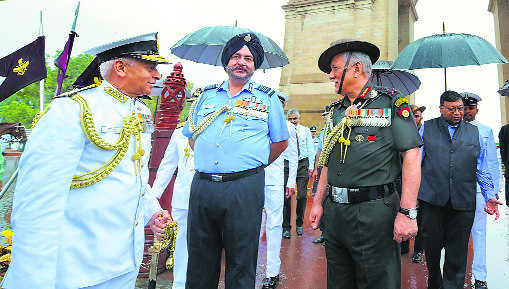 Synergy: The CDS will facilitate better coordination between the forces.

Prime Minister Narendra Modi’s announcement on August 15 that India will have a CDS to head the Army, Navy and Air Force for further sharpening the coordination between the forces was a big surprise. Requisite military integration is not achieved without CDS. Yet, the CDS didn’t come about till now, more because of bureaucratic stonewalling than fear of a military coup. Interestingly, India had come close to appointing a CDS on multiple occasions in the past.

The Group of Ministers post the Kargil Review Committee did recommend appointing a CDS. But according to an irrefutable source, Prime Minister Indira Gandhi was to announce the CDS on November 30, 1984. Gen AS Vaidya was to be made the CDS, but unfortunately, Indira Gandhi was assassinated before the announcement could be made. The second occasion was when Prime Minister AB Vajpayee resolved to announce the CDS the next day. His Principal Secretary received a call from the Air Chief that the CDS was not acceptable to him. The Principal Secretary spoke to the PM, who shelved the announcement.

The third occasion was Defence Minister Pranab Mukherjee telling a tri-service audience at HQ IDS on September 8, 2005, that the government had decided the previous week whom to appoint CDS, but there was no political consensus, adding that many things get approved without political consensus. Significantly, the Chairman COSC and Naval Chief, the Army Chief and the Officiating Air Chief unanimously told Mukherjee that not only was the CDS necessary, he must also be given full operational powers over the military in order to make him effective. The fourth occasion was Defence Minister Parrikar stating in December 2015 that the CDS could be a reality soon. A day earlier (December 15, 2015), PM Modi, chairing the Combined Commanders Conference, had called for promoting jointness among the armed forces, a call which he repeated on July 27, 2019, during the Kargil Diwas celebrations.

Appointing the CDS had to be a political decision, which is now taken. Speculation is rife on who would be the first CDS — Gen Bipin Rawat (retiring December 31), projected top choice in media; ACM BS Dhanoa with Balakot under his belt (retiring September 30), or another? Media reports a few years back, quoting government sources, had said the CDS chosen need not be senior to the service chiefs. There is also the precedence of recalling a retired General to raise the Army’s 1 Corps. The canvas is, therefore, wide open. Up to what age can the CDS serve is important: 62, 64 or above? These and how many stars should the CDS wear is best left to the government and the Implementation Committee.

The crucial issue will be how ‘effective’ the CDS is permitted to be. Will he be a single-point adviser to the government? The CCS note under which HQ IDS was raised states, “As and when the CDS is appointed, he will have equal voting rights as the Service Chief and in case of disagreement by two Service Chiefs, arbitration will be done by MoD.” There are no dissent notes by the Army commanders and equivalent within the three services, so why this provision for CDS? Given the MoD’s propensity for ‘divide and rule’, is the aim to deny the CDS being a single-point adviser to the government?

Military integration must include total reorganisation of the MoD, which will likely be fiercely opposed by the bureaucracy. The basis of raising HQ IDS was for it to be part of the MoD. But Defence Minister George Fernandes was resisted in doing so, which was also one reason for implicating Fernandes in the ‘Coffingate’ and making him step down. Mohan Guruswamy, Chairman and Founder, Centre for Policy Alternatives, has recommended to the PM that the CDS must be the principal military adviser to the government and the government’s sole point of communication with military, three service chiefs should report to the CDS, the Defence Secretary should be Secretary to COSC chaired by CDS, and the CDS should be of MoS rank. These sound recommendations, in addition to MoD-HQ IDS merger, merit focus by the Implementation Committee but will unlikely come through without the personal intervention of the PM.

The NSA heads both the DPC and the SPG, holds Cabinet minister rank but is not answerable to Parliament. Will the CDS have direct access to the PM or through NSA? Logically, CDS must be permanent member of CCS and also have direct access to Prime Minister. In fact, the CDS should reduce the burden of the NSA who should focus more on policies like that for sub-conventional warfare capacity building at the national level rather than getting involved in issues like defence procurements. Our adverse strategic asymmetry vis-à-vis Pakistan and China in sub-conventional capacity cannot be brushed aside with ‘surgical strikes’ and ‘Balakot’. Bridging this void should be the bread and butter of the NSA.

The CDS would be required to execute mandatory revolution in military affairs emanating from the political apex: the PM. The creation of integrated theatre commands and integrated functional commands, plus total horizontal and vertical military integration would be the natural fallout. In this context, five comprehensive studies for establishing theatre commands were undertaken under the aegis of HQ IDS in 2005-06 and appreciated at DGMO and equivalent level. Injection of synergy between the services in doctrinal, planning, procurement and operational matters would require the CDS to be given full operational powers, leaving ‘staff’ issues with service chiefs, as designations of COAS, CNS and CAS denote.

But the jubilation would come to naught if the CDS simply replaces the rotational Chairman COSC, with the MoD untouched. The CDS may report to the NSA. Theatre commands may be formed, but the CDS, with the current CIDS Secretariat, will be an enlarged version of the old Military Wing of the Cabinet Secretariat which earlier was under the COSC, who in turn was under the MoD. The CDS, therefore, will remain a toothless tiger, even as some may or may not even speak up for the military. The bureaucracy will love such an arrangement though it would certainly not amount to any real reform. What is the constitution of the ‘Implementation Committee’ and what they recommend, given the mandate, by November, may not be made public. But what PM Modi has in mind will be central to making the CDS ‘effective’. A partial reform after decades of wait will be disheartening and hardly conducive to meeting the operational requirements.