Minorities can’t be left out

BJP and RSS loyalists have attacked the Vice-President, Mr Hamid Ansari, for his speech (at the function of the golden jubilee celebrations of the All India Majlis-e-Mushawarat). 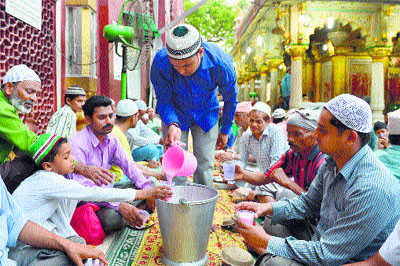 Let all come together, grow together.

BJP and RSS loyalists have attacked the Vice-President, Mr Hamid Ansari, for his speech (at the function of the golden jubilee celebrations of the All India Majlis-e-Mushawarat). I was present there too. The speech only posed various issues and important policy matters both internally for Muslims themselves and the obligations of the State, which are discussed every day in the media and public meetings all over the country.

The critics have shown their bankruptcy of knowledge of the Indian Constitution, which gives primacy to the protection of Rights of Minorities, and also of states’ obligations under law.

The nine-judge Bench of the Supreme Court highlighted the profound policy statements as follows: “The purpose of law in plural societies is not the progressive assimilation of the minorities in the majoritarian milieu. This would not solve the problem; but would vainly seek to dissolve it…. The purpose of the law must be not to extinguish the groups which make the society but to devise political, social and legal means of preventing them from falling apart and so destroying the plural society of which they are members.”

Thus, inclusive development in India and, for that matter, in any country alone is the path to prosperity. It is an undeniable truth and needs to be irrevocably accepted by all in India that Muslims and Christians are not outsiders. They are an integral part of India. Swami Vivekanand, one of the greatest spiritual personalities of India, talking about the intimate connection between the spirit of Islam and Hinduism, said there can be no real progress in India which does not include minorities, Muslims and Christians as equal stakeholders.

In this connection, it is heartening to find a confirmation of these principles of equal development of the majority and the minorities as laid down by the December 14-15, 2010, session of the UN Forum on Minority Issues which run as follows: “Consequently, the right of minorities to participate effectively in economic life must be fully taken into account by governments seeking to promote equality at every level. From implementing non-discrimination in employment and enforcing protection laws in the private sector to developing national economic development and international development assistance schemes.”

“Governments can consider both targeted and inclusive approaches to addressing the economic and social exclusion of minorities. Targeted approaches aim at programme or project   outcomes specifically at minorities, whereas inclusive approaches integrate minorities in a wider focus population for programme or project outcomes. If existing policies are not benefiting minorities equally or gaps in inequality are growing, targeted approaches should be considered. Decisions on policy choices should be made with the full and effective participation of all minority groups, should be transparent, and where possible, should be supported by disaggregated data demonstrating existing inequalities.”

“Governments should gather and regularly publicize disaggregated data to measure and monitor the effective participation of minorities in economic life. Improved data collection should be made a priority for the areas of employment and labour rights, poverty rates, access to social security, access to credit and other financial services, education and training, and property and land tenure rights.”

In the report of the working group on minorities formed by the UN Sub-Commission on Protection of Minorities, it was the unanimous view that the assimilative approach was not the one promoted by the United Nations, and that formal recognition of minorities is the first crucial step towards their effective participation in society. This means not only participation in governance, but also involvement in the economy. Also accepted was the need for multi-lingual education and respect for the cultural identity of minorities and the need to ensure fair representation of minorities within the law enforcement system and the workplace. The basic task is to reconcile the pluralism which then exists in that State, and the need to respect the identity of various groups, with the overall concerns of non-discrimination, equality, national security, territorial integrity and political independence.

The above declaration is a forthright rebuke to all those mischievous quarters which propagate that government actions at highlighting the condition of minorities are anyway divisive.

Thus, the same vision was emphasised by the founding fathers/mothers of the Constitution. The Fundamental Right Chapter in Part III of our Constitution specifically provides vide Articles 25 to 30, rights and privileges for the minorities such as: freedom of conscience and free profession, practice and propagation of religion; freedom to manage religious affairs; freedom as to payment of taxes for promotion of any particular religion; freedom as to attendance at religious instruction or religious worship in certain educational institutions; protection of interests of minorities; and right of minorities to establish and administer educational institutions.

This was so done because it is universally established that the faith and confidence of the minorities in the impartial and even functioning of the State is the acid test of being a civilised State. This is accepted wisdom, and was expressed succinctly by Lord Acton as follows:

“A state which is incompetent to satisfy different races condemns itself; a state which labours to neutralize, to absorb or to  expel them is destitute of the chief basis of self-government.” We need only to substitute ‘minorities’ for ‘races’ in the above quotation to apply the test in India.

It is possible that Prime Minister Narendra Modi, with the RSS breathing down his neck, may be powerless to take action against RSS-imposed BJP general secretary Kailash Vijayvargiya. But he should in all propriety and decorum publicly condemn and disassociate himself from this communal, low-level and false allegation by the general secretary of the party whose government he heads. This again is ‘Rajdharma’, of which he was so strongly reminded by the then Prime Minister, Mr Atal Bihari Vajpayee, in the year 2002.