VICE-PRESIDENT Hamid Ansari has raised a fundamental issue concerning our democratic polity and secular State, both basic features of the Constitution. The issue needs to be addressed by Parliament in the next session. 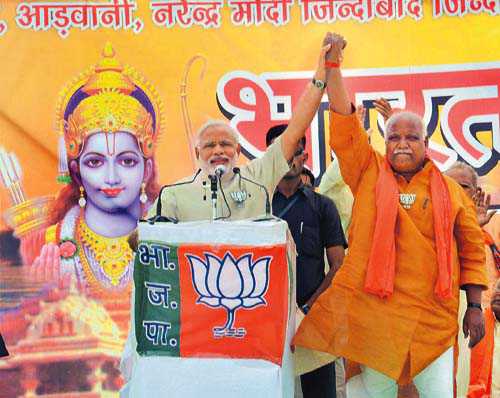 VICE-PRESIDENT Hamid Ansari has raised a fundamental issue concerning our democratic polity and secular State, both basic features of the Constitution. The issue needs to be addressed by Parliament in the next session. The country had suffered from mixing religion with politics before the Partition, and continues to suffer even now. This should end.  The Preamble contained the solemn resolve of the people to constitute India into a sovereign, democratic republic and to secure to all citizens Justice, social, economic and political; Liberty of thought, expression, belief, faith and worship; Equality of status and of opportunity and to promote among them all Fraternity, assuring the dignity of the individual and the integrity of the nation.  The Constitution prohibits discrimination inter alia on the ground of religion, race  or caste against any citizen. Every person has the right to freedom of conscience and free profession, practice and propagation of one’s religion, and every religious denomination  has the freedom to manage its religious affairs. The right of minorities to conserve their language and their culture is assured. They have the right to establish and administer educational institutions. Keeping in view these basic rights, which are enforceable, the Supreme Court had declared  that the Constitution was secular. By an amendment in 1979, the word ‘secular’ was inserted in the Preamble. Those who demand its deletion ought to know that what was latent in the Preamble was made patent by the amendment.

A nine-judge Bench of the Supreme Court in SR Bommai’s case declared that secularism was a part of the basic structure of the Constitution and explained its  implications. Religion is a matter of personal belief. The State is neither pro, nor anti, any particular religion. It has to provide equal protection to all religions, subject to regulation. “Under our Constitution, no political party or organisation can simultaneously be a political and a religious party.” The Constitution does not permit mixing religion and State power. The court also dealt with the validity of four proclamations imposing President’s rule in the States under BJP rule. The BJP had, in its poll manifesto for the UP Assembly elections in 1991, made a promise that if it returned to power, the government  would remove Babri Masjid, relocate it and facilitate the construction of Ram temple at the site. Defending President’s rule, it was contented that the state government, after getting elected, facilitated the demolition of the religious shrine of Muslims with the help of kar sevaks sent from other BJP-ruled states — as revealed in the Governor’s reports — and this was against secularism. Therefore, President’s rule had to be imposed. The court accepted this contention and upheld the proclamation.

Following the demolition of the masjid in the presence of top leaders of the party, except Atal Behari Vajpayee, there was an uproar across the country. Senior lawyers, prominent professionals and others organised in Delhi a convention for communal harmony in which retired judges, academicians, journalists and others participated. A committee was constituted under the chairmanship of Justice VR Krishna Iyer to recommend electoral reforms. It made inter alia two recommendations: A party bearing the name of a religion, race or caste, either wholly or partly, shall not be registered as a political party to contest elections. Reasonable time may be given to the existing political parties bearing such names to change their names; and a party which promotes communalism, whether before, during or after elections, or which seeks to fight elections on communal issues, shall be deregistered and disqualified to participate in elections. The signatories to the recommendations included  two former judges of the Supreme Court, seven former judges of different High Courts, Dharma Vira, former Governor, Prof Yash Pal, former Chairman, UGC, three former Vice-Chancellors, several professors, eminent journalists, senior lawyers, and leading medical practitioners. Copies of the recommendations were sent to the government, the Election Commission and all MPs. Nothing happened as the MPs were not interested.

Nani A Phalkivala had said long ago: “The moral crisis is writ large on the entire political scene. In the 50s, we had eminent men in public life who were every inch gentlemen. In the 60s, we had  many public figures who were every alternate inch gentlemen. Unfortunately, in the 70s, we have an unacceptably large number of politicians who are no inch gentlemen.” Rarely do we come across a statesman like Vajpayee who analysed the shortcomings of our democracy in a memorial lecture: “The electoral system has been almost totally subverted by money power, muscle power and vote bank considerations of castes and communities.” He added that elections were neither free nor fair and made a strong case for reform. In BR Kapur’s case, the Supreme Court quoted his speech and drew the attention of the government. During his tenure as Prime Minister, a national commission was constituted, with former CJI MN Venkatachaliah as Chairman, to review the working of the Constitution. In 2002, in its report it emphasised the need for urgent reform,   stating: “There is increasing criminalisation of politics and of the electoral process. If remedies are not found and implemented speedily, there might remain very little of value to salvage.” The recommendations are gathering dust.

Swachh Bharat Abhiyan, launched by the Prime Minister, is good. It would be meaningful if it includes Swachh Parliament and Swachh State Legislatures and necessary amendments to the election law are undertaken swiftly to ensure that these august Houses consist of selfless representatives. Till now the Constitutional objectives of justice, liberty, equality and fraternity have remained a pious hope.

Growing intolerance and communal tensions witnessed of late are posing a serious threat to communal harmony, peace and stability. Parliament alone has the power of legislation under the Constitution. Courts cannot enter this field. Assertion of public opinion alone can make Parliament act. It is time the voters and the media raise their voice, demanding election reforms to make secular democracy a reality.

The writer is an expert on constitutional law