More give than take in tie-up with US

Under Logistics Exchange Memorandum of Agreement it will be mostly one-way traffic with US military using Indian bases. 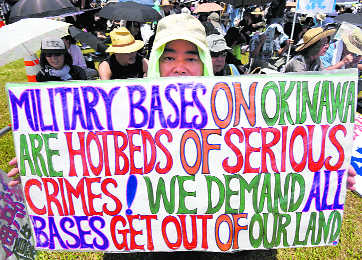 SOCIAL IMPACT: A demonstrator holds a placard during a rally against the US military presence in Naha, Okinawa prefecture, Japan, in June, following the alleged rape and murder of a local woman by a former US Marine.

As the standard-bearer of right-of-centre ideology and government, Prime Minister Narendra Modi has, apparently, felt compelled to burnish his personal credentials and the foreign policy tilt of the Bharatiya Janata Party government by forging for India the status of a treaty ally of the United States. The signing in Washington on August 29 of the Logistics Exchange Memorandum of Agreement (LEMOA) has virtually given India that status.

As a modified version of the standard Logistics Support Agreement (LSA) that the US requires its allies to agree to, LEMOA is supposed to meet India’s needs without compromising its independent standing. The statement by the Ministry of Defence (MoD) sought to be reassuring on this count, saying, “The Agreement does not create any obligations on either Party to carry out any joint activity. It does not provide for the establishment of any bases or basing arrangements.”

The LEMOA text has not been released. But, it may resemble the text (available on the Internet) of the November 2007 LSA the US signed with the Philippines. Per this text, what is involved is an “Equal Value Exchange” of “logistic supplies, support, and services”, including airlift using Indian C-17s and C-130s, and “construction and use of temporary structures incident to operations support”.

The problems with the LEMOA are several. It permits Indian armed services to use American bases anywhere and the US forces get to avail of Indian military bases and services. This is fine, but the Indian military’s focus does not extend beyond territorial defence. So, it will be mostly one-way traffic with US military units deployed in the Indian Ocean region and the Gulf putting up at Indian ports and US aircraft staging out of IAF bases. How does it serve India’s national interest to assist the US sustain its military operations in the Indian Ocean Region (IOR) not expressly directed at China? The second set of problems has to do with the “temporary structures” on Indian bases, which, obviously, will be under US’s operational control. But a foreign power controlling any part of Indian territory for any reason for even a miniscule amount of time will violate Indian sovereignty, and is not acceptable.

The third set of problems has to do with law and order issues created by the usually rambunctious American military personnel on leave, or on “rest and recreation”. How will these situations be handled? And finally, and most serious, American troops in India will socialise and a whole new dollar economy of “booze, drugs, and women” will spring up to service the American personnel. It will have disruptive effects on the traditional Indian society, as happened elsewhere in Asia (Vietnam, Japan, the Philippines) with breakdown of social interaction norms. It is a delicious irony that one of RSS’ own — pracharak Narendra Modi — is letting loose this uncontrollable foreigner-driven societal disruption.

All this is enough to stir uneasiness. At the policy level, fears will naturally arise about Modi so casually jettisoning the hoary policy from Jawaharlal Nehru’s days of “non-alignment” refashioned in the new millennium as “strategic autonomy”. It kept New Delhi from entangling India’s interests with those of major powers but permitted cooperation with them on a contingent basis. It was an elastic policy of a balancing power maximising its diplomatic leverage and maneuvering space. It is the balancing aspect that’s now lost and an alienated Russia by siding with the China-Pakistan duo turns the screws on India.

True, China is a difficult customer; its quicksilver policy time and again wrong-footing the more ponderous Indian government. The speed, the scale, and the quality of its military modernisation programme, moreover, have been such that the US is on the defensive. To wit, the US’s non-response to Beijing’s conducting live-fire naval drills and imposing an air defence identification zone in the contested South-China Sea immediately after the International Court of Arbitration on July 11 rejected China’s expansive “nine dash-line” claims in this strategic waterway. Deficient in transformative abilities, the Indian armed services, realistically speaking, are not even in the game. Geopolitically, therefore, it makes sense for India and the US to come together to slow down the Chinese juggernaut.

One can see why the US was desperate to have India on board. President Barack Obama’s “Asia pivot” is floundering given that the NATO flank is suddenly alive with Russia seeing Ukraine as its next target of opportunity, and Washington’s attentions divided between Europe and Asia.

But why is the Modi government so keen to make common cause with the US? Perhaps because such a policy is popular and is an easier, less risky option than committing the country to containing China all by itself, which requires the gumption missing in New Delhi. Would any Indian government have the guts, for instance, to arm Vietnam with nuclear missiles as a belated tit-for-tat response to Beijing’s nuclear-missile arming Pakistan and, in one fell swoop, achieve situational parity with China? Or, permanently deploy aircraft carrier INS Vikramaditya to the South-China Sea with periodic base-switching between Na Thrang on the central Vietnamese coast and Subic Bay, which Manila will gladly permit? New Delhi hasn’t even had the nerve to speed up transfer of the Brahmos supersonic cruise missile to Hanoi to bottle up the secret Chinese “Fourth Fleet” meant for IOR missions.

The writer is Professor for National Security Studies at the Centre for Policy Research, author most recently of Why India is Not a great Power (Yet), and blogs at www.bharatkarnad.com