Pervez Musharraf was commissioned in the Artillery Regiment of the Pakistan Army in 1964. 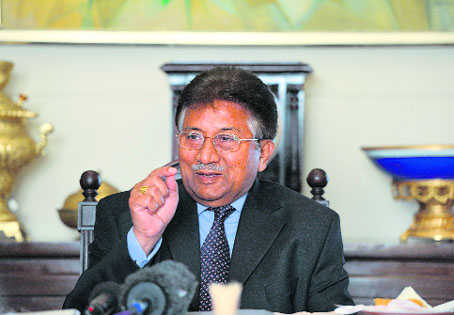 Pervez Musharraf was commissioned in the Artillery Regiment of the Pakistan Army in 1964. The journey of the erstwhile 'Gunner' to that of a current-day 'loose cannon' has been remarkable in its dexterity, proficiency and ability to walk the tightrope of Pakistani intrigues. Musharraf's recent comments on the internationally designated terrorist, Hafiz Saeed (with a $10-million bounty for his dastardly role in the 2008 Mumbai attacks), has surprised none of the Pakistan-watchers who noted the chameleon-like consistency in Musharraf's admission, "I am the biggest supporter of Lashkar-e-Taiba and I know they like me, and Jamaat-ud-Dawa also likes me." The self-claimed 'liberal'and 'moderate' went on to rant, "I was always in favour of action in Kashmir and of suppressing the Indian Army in Kashmir and they (Lashkar-e-Taiba) are the biggest force." The irony of the fact that it was Pervez Musharraf himself who, under US and Indian pressure, had banned the Lashkar-e-Taiba in 2002 was conveniently brushed aside by saying, "We had banned Lashkar-e-Taiba because the situation was different at that time. We were moving towards peace and as such I thought we should reduce 'mujahids' and increase political dialogue and frankly I had very less knowledge about him." Nine years at the peak of his official political powers, first as the 'Chief Executive of Pakistan' (October 1999 to November 2002) and then as the 'President of Pakistan' (June 2001 to August 2008) have not diminished the political ambitions of the maverick former-soldier who has defied the odds and tripped his opposition, and all those who believed his sincerity (eg India in Agra) or pusillanimity (eg Nawaz Sharif who superseded two other senior officers, to install an ostensibly pliant and non-threatening 'Mohajir', General Pervez Musharraf as the Pakistani Chief of Army Staff in 1998).

The rise of Musharraf

The least academically promising of the three sons of a middle class family, 'Gola' as the rotund Musharraf was known in his childhood, bettered the obvious academic brilliance of his two other brothers (one who was an economist in Rome and the other an anesthesiologist in the US). Musharraf showed early career-agility when he moved to the 'Special Service Group's (SSG) Commando unit. The India-centricity was accentuated by the command of an SSG Brigade in the proximity of the Siachen Glacier, the presentation of a master's thesis 'Impact of Arm Race in the Indo-Pakistan subcontinent' and then the signs of a precocious overstretch with  plans to infiltrate Kargil, whilst still a Brigadier, a seed that was to germinate much later. General Zia-ul-Haq's blue-eyed Pervez Musharraf, displayed similar behavioural traits to his early mentor Zia-ul-Haq. The master-of-disguise managed to establish his liberal and westernised perceptions by earning the nickname 'Cowboy' for his flamboyance, centre-split hairdo and a rare penchant for dogs with names like 'Whiskey' and 'Che' — an image decoy that hid the fact that it was the Islamist hardliner Maulana Fazl-ur-Rahman who pushed for his successive elevations. Much later, with the insecure Nawaz Sharif in the Prime Minister's chair, Musharraf ingratiated himself with his 'safe' credentials (non-Punjabi and non-Pathan) and, ostensibly, apolitical bearings to take over as Pakistan's Chief of Army Staff — an unparalleled position of power within the hierarchy of the 'state-within-a-state' (as the Pakistani military is known), that would haunt Nawaz Sharif within a year of his supposedly 'safe' decision.

Musharraf's secret ambitions blossomed and he out-muscled and outwitted Nawaz Sharif and anointed himself to creative designations of power, while still cleverly retaining the uniform as long as he could (the Chief of Army Staff who took over on October 6, 1998, handed over his baton to his protégé General Ashfaq Kayani, on November 28, 2007). The dual personality did flip-flops by undertaking Kargil misadventures and managing the optics of overture at Agra, he cozied up to the India-facing 'Strategic Assets' and joined the US-led 'War on Terror' by abandoning the 'Afghan Assets'. He destroyed the other possible threats and suppressed the two main political parties, ie PML and PPP (though the 'Mohajir' MQM retained a soft spot), propped his Pakistan Muslim League (Quaid-e-Azam Group), took on the judiciary and tried reigning in ultra-conservative elements, eg Lal Chowk episode. In all, Musharraf the unlikely Chief (third in line) with a 'Mohajir' background, tactically aligned with the political classes till he tried removing them permanently, had a love-hate relationship with militant Islamists that saw a number of attempts on his own life, and was finally caught in the vexatious trap of juggling and pandering to too many regressive interests at the same time — the web of his vengeful actions finally drove the impression that Musharraf had duped all!

Today, 'Tricky Mush' (as General Asif Nawaz Janjua would call Musharraf for his dodgy ways) is possibly a hot potato for the Pakistani military and currently on bail in the Benazir Bhutto assassination case, with the travel-ban on him lifted. The man who consistently fooled the political parties, terrorist outfits and the allies like the US, is testing the emerging political space by aligning with the Islamists like Hafiz Saeed. With the PML-N and PPP on the back foot owing to their own misdoings, the army has already signaled its comfort with the Islamists with the recent handling of the Islamabad 'sit-in' and the coincidental ascendancy to chairmanship of the rickety 'Grand Alliance of 23 parties' is signal enough that Musharraf is planning to return to the political centerstage. The man who famously admitted to speaking lies 'in the national interest' is a quintessential politician who wore the uniform temporarily, and is gnawing at the political opportunities that the current chaos in Pakistan offer.