Speaking on Independence Day, the Prime Minister announced the creation of the post of Chief of Defence Staff (CDS). 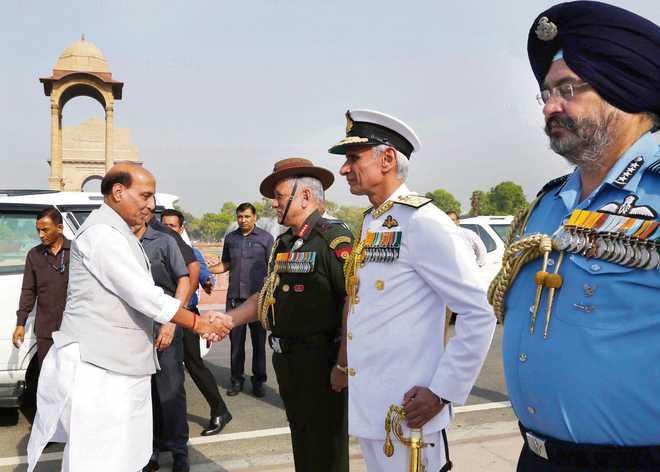 Synergise: Nature of a future war will require the collective application of assets.

Speaking on Independence Day, the Prime Minister announced the creation of the post of Chief of Defence Staff (CDS). The appointment of a CDS has been hanging fire since Independence, when even Mountbatten had got involved. In response to a letter from Lt Gen Chhibber, former Director-General, Military Operations, Mountbatten wrote, “Last time when Pandit Jawaharlal stayed with me at Broadlands (his residence in the UK), before the Chinese invasion in 1962, I urged him to  appoint Gen Thimayya to the post of CDS, as I could see trouble brewing up... I warned him that if war came, the Indian Army  would suffer a quick defeat. He (Nehru) said that there was no question of a war, as India wishes peace with everybody... This system (CDS), he was unwilling to adopt.”

When war finally came, the IAF stayed out, while at the same time, Nehru wrote two letters to the US President, asking for fighter jets to support the army, against the Chinese.  On the one hand, the IAF was not committed and on the other, air support was being asked from the US. Obviously, there was absence of a central authority for the conduct of war.

During the 1965 war with Pakistan, the absence of integrated operational plans of the Army and the IAF is best described by Air Vice Marshal Sondhi: “The manner and circumstances in which the IAF went into in the 1965 war in the Chamb sector are illustrative of the political hesitation that delayed the decision on the employment of the IAF ... until all but too late... This also exemplified the IAF’s own half-hearted participation before the desperate reaction of the Pakistan Air Force which led to an all-out air war... but the IAF missed a rare opportunity to demonstrate more fully to the Indian Army that it exists otherwise  than being a fighting service for its own good.”

One former Air Chief disclosed that he did not know of the Army’s offensive in the Punjab sector, till after it was launched. Further, the IAF had told the Army that it should not expect any air support during the first seven days or so as then it will be fully committed to winning the, ‘air battle’. The outcome of the air battle was never clear, but what was obvious was that own troops in the Jammu sector were constantly attacked by the Pak air force, with very little activity by own air force in this sector.

In Kargil, it took the IAF full 10 days to come on board and join the fight. Its attitude is best stated by the then Air Chief: “To make up the initial lapse, the Army was now seeking IAF help.”

From the above incidents, it would be apparent that in the wars India has fought, coordination and jointness between its defence forces has been marginally so, if not missing.

We may as well examine what an American defence expert, Ashley J Tellis, has to say on the subject, in his book, Stability in South East Asia, purported to be Rand report for the US Army: “If Pakistan initiates conflict, it has the advantage but only in a shirt war. If India initiates conflict, it can surmount numerical but not operational deficiencies.” It goes on and records: “The IAF does not contribute operationally. The Indian Navy is irrelevant except as a risk fleet, but China’s forays into Indian Ocean region has brought into focus the relevance and importance of the Indian Navy and the imperatives of having a strong navy.”

After Kargil, two committees were formed, one under Subrahmanyam and the second under Arun Singh. Only one recommendation of the Arun Singh Committee, for creating an integrated theatre command for the Andaman and Nicobar islands, came through, while other recommendations of both committees ended before the group of ministers and subsequently with the Cabinet Secretary, Naresh Chandra. Finally, nothing came of the recommendations.

The CDS by itself, if taken merely as a single point of advice to the government would serve no useful purpose, because advice, as such, is just one issue and which, in any case, could come from the Chairman Chiefs of Staff Committee, National Security Adviser and the Defence Secretary, who stands responsible for the defence of India.

The CDS, without full integration of the three services headquarters with the MoD as well as theatre commands, would be an exercise in futility.  Some in the higher echelons of the IAF are confused about the term  ‘theatres’ as visualised within the geographical parameters of India and try to compare these with those that existed during World War II. ‘Theatre’ is merely a word and those who are bent on confusing themselves with this word might as well think these as ‘integrated commands.’

Jointness in operations, where more than one service is taking part, cannot come about without a joint command with a single commander of operations in a given geographical area. Here, it may suffice to quote Gen Albert von Wellenstein, “Never will I accept a divided command — no not even were God Himself to be my colleague in office. I command alone or not at all  (Liddle Hart’s book, The Great Commanders). This is the very essence of the unity of command.

If we examine the causes of our 18 major defeats, from the times of Alexander to the Battle of Plassey, a fuzzy ponderous and pedestrian system of higher defence management, as articulated by Jadunath Sarkar, it runs like a warp thread in the management and conduct of battles by Indians.

The nature and parameters of a future war will require synergising the full potential and collective application of a range of assets available and those that may come up. These assets include cyber command, strategic missiles command, nuclear command, space assets, special forces command and in the future, ‘drones command.’ Putting the full weight of all or some of these in a theatre of operation, as required, would be possible only under integrated theatre commands. Then there is the requirement of allocation of resources to the theatre commands, based on tasking, which, in turn, will have to be based on the overall operational plan as worked out by the CDS. Which, where necessary, will be in consultation with the government.

The integration of defence services headquarters with the MoD and creation of CDS system in its full play (theatre commands)  will have to combat and overcome  turf battles within the services and with the MoD. Shifting to the system will cut down on the existing number of commands from nearly two dozen to less than one dozen. China has only one theatre command facing India across the LAC, along the Tibet border.

The CDS system would also be able to evolve a mechanism to acquire combatable  and complimentary weapon systems for integrated deployment of combat elements, suitable for a particular theatre of operations, as also energise the DRDO to fulfill the commitment of ‘Make in India.’

As we continue to elude the adoption of the CDS system, jointness will continue to bypass us. In the event of a full- scale two-front war, India will pay a heavy price for its failure to fully integrate its defence forces and bring ‘unity of command’ in various theatres of operations.

In the US too, there was much opposition to the adoption of the CDS system and this diffidence was overcome by the Senate passing the Goldwater-Nicholas Act of 1986. In India, given the nature and extent of opposition to the idea of CDS within the services and bureaucracy, only the PM can steer it, as an Act of Parliament, on lines similar to those of the US, and bring into being, a CDS with integrated theatre commands.