Neither free nor fair 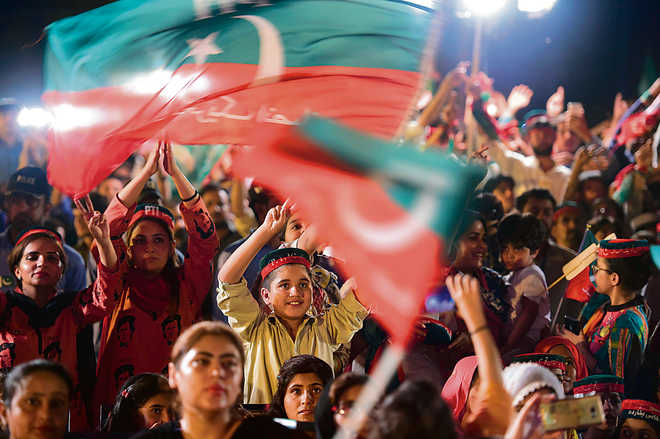 IN an unusual and courageous interview in the BBC’s ‘Hard Talk’ programme, Hameed Haroon, CEO of Pakistan’s highly respected Dawn newspaper, recently lashed out at Pakistan’s military. Haroon accused the ISI of intimidating the Press across Pakistan, while seeking to undermine the freedom of the media through threats, intimidation and even going to the extent of threatening distributors across the country to stop the distribution of papers like Dawn. He suggested that the larger aim of the military was to discredit and divide the PML (N), led by Nawaz Sharif, indicating that the military favoured the Imran Khan-led Pakistan Tehreek-e-Insaf (PTI) to lead a weak coalition, which would play second fiddle to the army. Haroon made it clear, as head of the All Pakistan Newspaper Society — apex body of Pakistan’s media organisations — that he was voicing the deep concerns in Pakistan about the military undermining democratic freedom in the country.

Interestingly, Haroon observed that the elections supervised by the election commission would enable people to vote for candidates of their choice. But the prevailing intimidation and fear had destabilised the political process by splitting parties, while discrediting and/or arresting those the military sought to eliminate, through a flawed process of ‘accountability’. He also drew attention to the ham-handed efforts by the army to intimidate media organisations to not cover or report the activities of the Pashtun Tahafuz Movement (PTM). The PTM has been demonstrating across the country against the atrocities and human rights violations of the army in its much-touted Zarb-e-Azb operations. Artillery and air power were ruthlessly used by the military, severely damaging Pashtun-dominated towns and villages in tribal areas bordering Afghanistan. Activists of the PTM have been hounded and arrested by the paramilitary Rangers.

Nothing has changed in the army’s involvement in internal affairs over the past three decades. It has claimed to be the ‘guardian’ of both the ‘territorial’ and ‘ideological’ frontiers of Pakistan. Ever since he became Prime Minister for the third time in 2013, Nawaz Sharif was at the receiving end of internal and external conspiracies by the ISI. This was, among other reasons, because of his propensity to act independently on relations with India. The army even sought to veto his visit to India for the swearing in of Prime Minister Modi. Modi’s visit to Lahore for a family wedding, at the invitation of Nawaz Sharif, was followed by a terrorist attack on the Pathankot air base. It is no secret that in the recent past there has been a meeting of minds between the judiciary and the army in getting rid of Sharif by having him arrested and tried for his ownership of properties in London for two decades now. No similar actions have been taken against Generals Musharraf and Kayani, who possess properties in London, Dubai and Sydney.

Army actions to undermine democratic processes have also been exposed by two of Pakistan’s most highly respected journalists, Ahmed Rashid and Najam Sethi. Rashid avers: ‘The crackdown by Pakistan’s army and judiciary has extended to civil society activists, but the primary target has been media outlets.’ He draws attention to disappearances of those critical of the military’s actions. He states: ‘Censorship and self-censorship on issues that cast the military in a negative light have become pervasive. Many TV stations, for example, are refusing to cover a new protest movement by young Pashtuns that accuses the military and others of rights abuses against members of their ethnic group, who live mainly on the border with Afghanistan.’ At the same time, candidates of moderate/secular parties like the Awami National Party in the Khyber Pakhtunkhwa province and in Balochistan have been mercilessly targeted and even killed.

In 2013, Sharif’s PML (N) virtually swept the polls in the Punjab province, becoming the largest single party in parliament, winning 116 seats out of 342 in the national assembly. Its main rival, the PPP, won 42 seats, with the army-backed Imran Khan’s PTI winning merely 35 seats. While the PML (N) swept the populous and influential Punjab province, the PTI formed the provincial government in the neighbouring Pashtun-dominated Khyber Pakhtunkhwa. The PPP, based largely in rural Sind, formed the government in Sind, with a weak PML (N)-led coalition assuming office in Balochistan.

After Sharif’s arrest and disqualification from the elections, the army moved swiftly to further weaken the PML (N) in Punjab by engineering defections and dissent by influential leaders, like Sharif’s interior (home) minister Chaudhry Nissar Ali Khan. The army also got PTI leaders like former foreign minister Shah Mohammed Qureishi to engineer defections in the Seraiki-speaking southern Punjab. Moreover, Imran Khan is also being helped to form alliances with banned radical Islamic groups like the Al Qaeda-affiliated Harkat-ul-Mujahideen, headed by Maulana Fazlur Rehman Khalil. Sharif’s vote base in Punjab will also be eroded by the Lashkar-e-Taiba’s political front, the Milli Muslim League, which will contest around 200 seats.

These developments will further weaken the base of the PML (N), even as the PTI is being helped to emerge as the largest single party, which will be in a position to form a coalition government with support from Islamist parties. The People’s Party has been weakened in its base in rural Sind while facing challenges from the army-backed Pir of Pagaro and the Karachi-based MQM is deeply split.  Moreover, gatherings of moderate parties like the Awami National Party have been attacked, most notably when its leader Haroon Bilour perished in a bomb blast. Imran Khan is known for his anti-India and pro-Taliban views on foreign policy. His main foreign policy advisers, Shah Mehmood Qureishi and Shireen Mazari, are strongly anti-India. Pakistan’s army will emerge further strengthened in shaping national politics to prop up a weak government which will not go against its wishes, as Sharif was inclined to do periodically. New Delhi will have to think afresh on how to deal with the emerging situation across its western borders.