A new dawn for India-Russia relations

PRime Minister Narendra Modi’s visit to Russia onSeptember 4-5 was important in many respects. 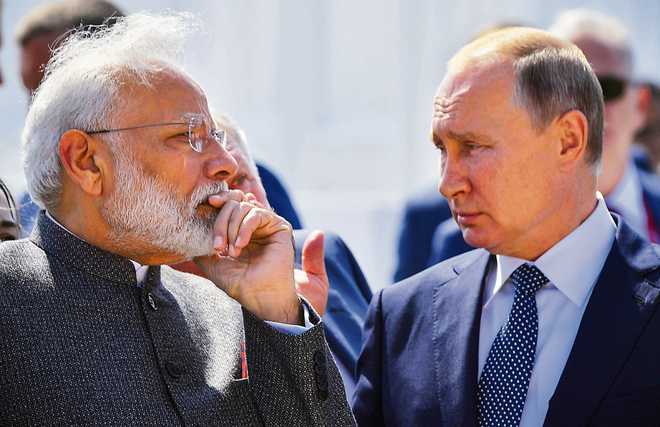 PRime Minister Narendra Modi’s visit to Russia on September 4-5 was important in many respects. On September 4, he attended the 20th India-Russia Annual Summit in the Far-Eastern town of Vladivostok, while the next day, he participated in the Fifth Eastern Economic Forum as the chief guest. He was accompanied by a 50-member FICCI delegation. Modi’s visit scored high marks on both symbolism and substance.

The choice of Vladivostok as the venue for the meetings was not a coincidence. It was meant to highlight Russia’s objective of developing its Far-Eastern region, which, though vast in area, is sparsely populated. In the last several years, a substantial number of Chinese have entered this area for employment. China also has a land border with this region.

Modi was received warmly by Putin, who shares excellent personal chemistry with him. It was the third time this year that the two leaders were meeting. Last April, Putin conferred Russia's highest civilian award, the Order of the Holy Apostle Andrew the First, on Modi. A comprehensive Joint Statement was issued and 15 MoUs/agreements were exchanged during the visit, reflecting the wide range of areas in which the two countries are cooperating, and their plans for the future.

Among the notable features of the Joint Statement are: promotion of mutual settlements of payments in national currencies; bilateral cooperation in the development of the Russian Far East; bilateral cooperation in the Arctic; conclusion of a long-term agreement for sourcing Russian crude oil also through the northern route and pipelines; reciprocal provision of logistic support and services for the armed forces of the two countries and introduction of free electronic visas for Indian nationals to visit the Kaliningrad region and Vladivostok. The two sides also signed an agreement to develop maritime links between Chennai and Vladivostok. Each of the above features is strategic.

Even though Russia and China have come closer in the last few years, mainly because of the US policies towards them, Russia remains deeply suspicious of Chinese geopolitical objectives and expansionism. For this reason, Russia wants to balance the Chinese presence in its Far East with India, through a greater Indian role in the development of the region. Several Indian companies are already present in the area in fields such as diamond cutting and coal mining. Introduction of free visas for Indian nationals to visit Vladivostok is designed to facilitate this process. PM Modi also announced a line of credit worth $1 billion for the development of Russia’s Far East, the first such region-specific line of credit.

The promotion of mutual settlement of payments in national currencies is designed to overcome the problems created by the US sanctions against Russia, and to move towards what is known as the ‘de-dollarisation’ of trade. With the list of countries targeted by US sanctions growing, ‘de-dollarisation’ is increasing, through payments in national currencies, and in currencies other than the US dollar, such as the euro.

The reference to bilateral cooperation in the Arctic in the Joint Statement is important for India, given the enormous resources, such as oil and gas in the area. Russia is an Arctic power, with substantial areas of the region within its boundaries. India, along with China, became a member of the Arctic Council a few years ago. Indian companies and manpower, along with Russian expertise, could play a role in exploiting the natural resources in the Arctic. Chinese companies have already acquired a foothold in the area.

The two countries have indicated that they would like to develop strategic relations in the area of energy. Thus, they have stated that they intend to jointly develop oil and gas fields in Russia and India, including offshore fields. They would also work to conclude a long-term agreement for sourcing Russian crude oil, and explore the possible use of the ‘Northern Sea Route’ and a pipeline system for delivering it. The reference to the development of a maritime link between Chennai and Vladivostok in the Joint Statement is aimed at facilitating the delivery of Russian oil and LNG to India.

Defence cooperation between the two countries is a vital and time-tested feature of their bilateral relations. They have now agreed to add a new dimension to it: reciprocal provision of logistic support and services for the armed forces of the two countries. By doing so, India is likely to extend military facilities to Russia, similar to those extended to the US. That should reassure Russia, which has sometimes felt neglected by India.

The two countries also expressed similar views on regional issues such as Afghanistan, Iran and Syria, where they welcomed “stabilisation of the situation” and “insisted on the need to respect Syria’s sovereignty and territorial integrity.” On Iran, they called for the “full and effective implementation of the Joint Comprehensive Plan Of Action (JCPOA).” Both these positions are quite different from the US stand on Syria and Iran.

PM Modi’s visit to Vladivostok succeeded in restoring some of the old trust and warmth to India-Russia relations, which have occasionally witnessed turbulence in the last two decades. That happened mainly because of a perception in Russia that India was getting too close to the US. To indicate its displeasure, Russia sometimes moved closer to Pakistan, causing misgivings in India.

However, that phase now seems to be over, with India, too, realising the limits of its relations with the US, exacerbated by the unpredictable and erratic behaviour of Trump. The fact that Russia was the only P-5 country to unequivocally and publicly back India's recent action regarding revocation of Article 370 in Kashmir is reminiscent of old times, when the two countries trusted each other. They now need to build on this trust, and take their relationship to the heights it once reached.