The developments in the Persian Gulf have taken a sudden turn for the worse. 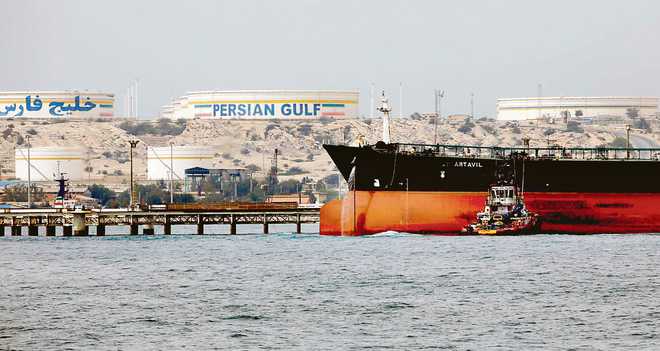 In deep water: Since the June crisis, Indian ships passing through the waterway have been assisted by our Navy. In case of a larger conflict, it would have to pull out.

The developments in the Persian Gulf have taken a sudden turn for the worse. A drone strike on two major Saudi oil facilities has halved the kingdom’s daily oil production. The Houthi rebels, who are facing a brutal Saudi military campaign in Yemen, have claimed credit for the strike.

But US Secretary of State Mike Pompeo blamed Iran, which has rejected the charge. In a tweet on Sunday evening, President Trump said, without naming Iran, that the US was ‘locked and loaded depending on verification’. The Americans may carry out strikes on Iran, but, given the credibility of the administration, there will be few takers for its version of the events anyway.

The region has already been on tenterhooks ever since the US launched its ‘maximum pressure’ policy against Iran. The US blamed Teheran for attacks on commercial tankers in the Persian Gulf in June. Amidst mounting tension, Iran shot down a US spy drone that it said had intruded into its airspace. At the time, Trump said he had called off an attack at the last minute because it would cause needless collateral damage.

US strikes and Iranian counter-strikes are a real possibility and could endanger the entire region. India could well face the biggest impact as it relies on the region for oil and gas. India imports 80 per cent of the oil it consumes, and of this, two-thirds comes through the Straits of Hormuz. In addition, the region also provides half of India’s liquified natural gas (LNG). Since the June crisis, Indian ships passing through the waterway have been assisted by Indian Navy vessels. However, should there be an outbreak of a larger conflict, the Indian Navy would have no option but to pull out from the area.

The impact of the disruption of production in Saudi facilities could be limited and of short duration,  but should the situation deteriorate, besides the issue of oil supply, India may have to confront with much higher oil prices. According to one calculation, a $1 rise in the price of oil results in a Rs 10,700 crore annualised increase in the oil bill. Last year India spent $111.9 billion on oil imports alone. Currently, the oil prices are between $50 and $60 per barrel, but there is speculation that it could climb to $100 soon.

The blame for the current state of affairs must squarely rest on President Trump. He unbalanced US policy towards the region by precipitately pulling out of the Joint Comprehensive Plan of Action to freeze Iran’s nuclear programme. Then, he went out of his way to tilt US policy towards Israel and Saudi Arabia, personalising it in the form of Benjamin Netanyahu and Prince Mohammed bin Sultan (MBS).

The latter has gone out of his way to disrupt regional calm. He blockaded Qatar, kidnapped the Prime Minister of Lebanon and intensified the war against the Houthis in Yemen with a brutal air campaign that has led to untold suffering for millions of Yemenis. Remarkably, western newspapers reporting on the drone attack on Saudi facilities, played down the fact that this could have been retaliation for the wanton attacks faced by Yemeni civilians at the hands of the Saudi Air Force. MBS has done all this and more with the US looking the other way. In fact, Trump has vetoed two Bills calling for the end of US support for the war in Yemen.

The Trump turn on Iran has, in addition, blindsided New Delhi. India has been forced to cut off all oil trade with the country, which is the most proximate source of oil to the subcontinent. Further, it has dampened Indian enthusiasm for the Chabahar project. The volume of trade with Afghanistan remains low and there are no signs that India is going to keep its promise to build the railway line to connect Chabahar with Zahedan, the entry point for Afghanistan. The net consequence of New Delhi following Washington’s lead is that it has thrown the game in this strategic neighbourhood to China.

Notwithstanding its massive military superiority over Iran, the US is unlikely to take things casually. Iran is not Iraq, and its armed forces have been preparing for asymmetrical combat with the US for decades. American bases in the region are within the range of Iranian ballistic missiles which, in any case, can also rain down on Saudi and Emirati cities causing mayhem all around.

As with all things Trump does, there is a parallel track in which the US can make up with Iran and teach the Saudis a lesson. Recall that he sacked his National Security Adviser John Bolton because the latter opposed relieving some of the Iran sanctions earlier this month. Rouhani had made it clear that he would negotiate with the US only if economic sanctions were lifted. Thereafter there was talk of a possible Trump-Rouhani meeting at the sidelines of the UN General Assembly in New York. On Sunday, despite the heightened rhetoric of the President himself,  White House Adviser Kellyanne Conway refused to rule out the Trump-Rouhani meet.

So, here we are, a few steps away from what could be a geopolitical catastrophe with major consequences for India. But if you were to look for signs that New Delhi was concerned, you would be unlikely to find them.