No credit to the maker of modern India

During the struggle for Independence, the liberal leadership in the Indian National Congress, like Jawaharlal Nehru, was sandwiched between the Hindu Mahasabha and the Muslim League. 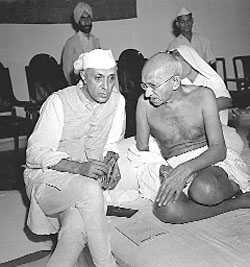 Mahatma Gandhi put his weight behind the decision to make Nehru the PM.

During the struggle for Independence, the liberal leadership in the Indian National Congress, like Jawaharlal Nehru, was sandwiched between the Hindu Mahasabha and the Muslim League. They had to fight both these forces even after Independence. The following quote from his convocation address at Allahabad University in 1947 is a reflection of the then prevailing scenario and reveals Nehru’s dreams and apprehensions about Independent India:

“...we aim at a strong, free and democratic India, where every citizen has an equal place and full opportunity of growth and service, where present-day inequalities in wealth and status have ceased to be, where our vital impulses are directed to creative and cooperative endeavour. In such an India, communalism, separatism, isolationism, untouchability, bigotry and exploitation of man by man have no place, and, while religion is free, it is not allowed to interfere with the political and economic aspects of a nation’s life.”

This helped India to emerge as a stable democracy and a developing economy. The subsequent development of the country took place because of such strong foundations.

The developed world had serious apprehensions about India’s survival as a nation. But not only did India survive as a nation, it also emerged as a strong and largest democracy in the world. Therein lies the secret of Nehru’s role in the making of modern India.

The Industrial Policy resolutions of 1948 and 1956 laid down the foundations of a mixed economy which, in turn, became an instrument of translating Nehru’s vision of modern India into a reality. While being an ardent supporter of the public sector, Nehru visualised and assisted the growth of the private sector in all those industries in which financial investments were not large and whose gestation period was not long. However, the then Indian entrepreneurial class was not capable of handling the high-skill and capital-intensive industries. The Bombay Plan (1945), prepared by a group of the then leading industrialists of India, was also in agreement with this.

The public-funded research and development, development of basic and heavy industry, scientific and technical manpower, physical and social infrastructure, and much-needed capital and intermediate goods took place in that period. This has helped the growth and development of the private sector in particular and economy in general. This also brought up the ‘infant’ into a strong and powerful adult. Had the Nehruvian era not laid down the strong foundations, ‘make in India’ could not have been dreamt of.

The switchover to the new economic policy (with liberalisation, privatisation and globalisation as its main planks) in 1991, perhaps, could never have been possible without the foundations laid down in the Nehruvian era. However, at that juncture, the country could have expected such a shift even from Nehru.

The seeds of UPA government’s programme of inclusive and faster growth (11th and 12th Five Year Plans) through PPP (public-private partnership) mode were very much there in the Neruvian era’s mixed economy model and the industrial policy. The fundamental difference between the two, however, was that the Nehruvian era enabled and empowered the then feeble private sector to participate in the PPP mode of development. Another major difference is that sharing of the benefits of growth with the marginalised sections was largely inbuilt in the former, whereas the latter mainly believes in a trickle-down principle, which is not happening. Nehru and his colleagues were well aware that peace is a pre-requisite for development and tried to maintain normal political relations with India’s immediate neighbours despite various provocations and constraints. The Non-Aligned Movement was a powerful instrument to stay away from the then two powerful global blocs and extract the best out of them. Nehru also harnessed the Gandhian legacy to promote India-Africa relations to the advantage of both.

Prime Minister Modi’s gesture to invite South Asian heads of state at his swearing-in ceremony, his whirlwind tours to various countries and the latest India- Africa Summit at New Delhi need to be viewed in the above Nehruvian policies and approach. His buzzword “Sabka saath, sabka vikas” was very well-ingrained in the Nehruvian era’s balanced regional development and growth with social justice. Modi’s “make in India” was very much there in the Nehruvian era’s self-reliance (inward-looking development strategy) and development of basic and heavy industries.

There is, however, a fundamental difference. Nehru’s self-reliance was aimed at protecting and developing India’s infant industrial sector (nurse the baby, protect the child and free the adult) and develop indigenous industrial capacity. whereas Modi’s  “make in India” is aimed at inviting foreign direct investment  to produce goods and services by using India’s natural resources and men and material. Certainly, the current strategy shall help the FDI to have a sizeable share of the returns. In the face of labour displacing technology, even the additional employment generation is not certain.

Even the competitive capacity of the Indian private sector was created during the Nehruvian era.

Clearly, the post-Nehruvian era’s political leadership (both the UPA and the NDA) is following almost all the policies and ideas with a changed nomenclature and often with a poor substitute. NITI Aayog, the new avatar of the Planning Commission, is a glaring example. One wonders, when the PM is the ex-officio Chairman of the Planning Commission and the term of its members is co-terminus with the government, then what prevents the PM from introducing the desired changes and implement its policies?

Replacing Nehuvian era’s good institutions simply with a new nomenclature may not yield any positive results for the society, polity and economy. At the same time, it is beyond comprehension that the Nehruvian era’s contribution to the Indian economy is conspicuously absent from the development discourse and public debate. It must be reiterated that India as a country is a continuum and the political leadership and governments come and go.

The writer is the Nehru SAIL Chair Professor at CRRID, Chandigarh.