IN his prison memoirs, while awaiting execution, Zulfiqar Ali Bhutto lamented in 1977 that while the “Christian, Jewish and Hindu” civilisations had nuclear weapons capability, it was the “Islamic civilisation” alone that did not possess “full nuclear capability”. 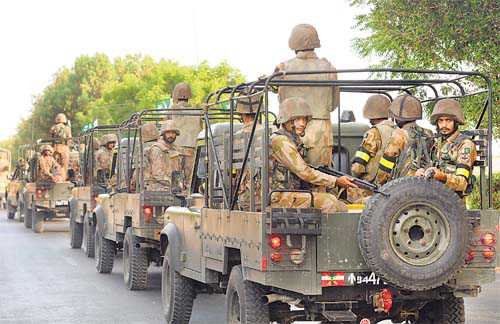 The Punjab province in Pakistan is vulnerable as most of its cantonments are based there.

IN his prison memoirs, while awaiting execution, Zulfiqar Ali Bhutto lamented in 1977 that while the “Christian, Jewish and Hindu” civilisations had nuclear weapons capability, it was the “Islamic civilisation” alone that did not possess “full nuclear capability”. Saudi Arabia, Libya and others initially financed fulfilment of this Bhutto dream and aspirations. Bhutto’s successors were liberal in transferring nuclear weapons technology and designs to Libya and Iran and offering such technology to Iraq. These pan-Islamic views were and are shared by a number of Pakistan’s nuclear scientists. Shortly after the 9/11 terrorist strikes, two senior Pakistani nuclear scientists, Sultan Bashiruddin Mehmood and Chaudhri Abdul Majeed, were charged with helping the Al-Qaeda acquire nuclear weapons. Two other scientists, Suleiman Asad and Ali Mukhtar, wanted for questioning about their links with the Al-Qaeda and Taliban, mysteriously disappeared while on a visit to Myanmar.

A “fact sheet” published by the White House then stated that both Asad and Mukhtar had meetings with Mullah Omar and Osama bin Laden during repeated visits to Kandahar, prior to 9/11. It is no secret that AQ Khan’s successor, Samar Mubarak Mand, is also a hard-core Islamist, no less India obsessed than AQ Khan. Pakistan’s contacts and partners for nuclear proliferation extended to Saudi Arabia, Iraq and even North Korea, with which it struck a deal for supplying enrichment technology in exchange for liquid fuelled Nodong missiles. It is not surprising that, given this dubious track record on nuclear proliferation, Pakistan has few backers for receiving an Indian style “nuclear deal”, in the international community, apart from its “all-weather friend” and partner in nuclear proliferation, the Peoples Republic of China.

Having acquired nuclear weapons, Pakistan was initially at a loss to spell out its nuclear doctrine, apart from repeating the mantra that its nuclear deterrent was exclusively “India centric”. About a decade ago, Lt General Khalid Kidwai, the longtime head of Strategic Planning of Pakistan’s National (Nuclear) Command Authority, declared that Pakistan’s nuclear weapons were “aimed solely at India”. Kidwai added that Pakistan would use nuclear weapons if India conquers a large part of Pakistani territory, or destroys a large part of its land and air forces. He also held out the possibility of the use of nuclear weapons if India attempted  to “economically strangle” Pakistan, or pushes it to political destabilisation.

In the decade that has elapsed since General Kidwai spoke, Pakistan has used its plutonium reactors and reprocessing plants in Khushab, located 200 km south of Islamabad, which have been supplied by China, to build light, relatively low-yield tactical nuclear weapons, mounted on short-range Nasr missiles. Pakistan describes this development as indicating that it now has “full spectrum nuclear capability” to launch low- yield tactical weapons against Indian army formations along the international border. On October 21, Pakistan Foreign Secretary Aizaz Chaudhry proclaimed: “Pakistan has built the infrastructure to launch a quick response to Indian aggression…Usage of low-yield nuclear weapons would make it difficult for India to launch an attack against Pakistan.” While this may appear to make sense in the Rajasthan-Sind region, it is certainly not feasible in Punjab, where the border areas in Pakistan are densely populated. Surely, the Punjabi-dominated Pakistan army does not intend to use its inability to fight a conventional war, to nuke its own Punjabi brethren, on its borders with India.

India’s nuclear doctrine, first officially enunciated in January 2003, asserts that it intends to build and maintain a “credible nuclear deterrent”. While adopting a policy of “no first use”, it clarifies that its nuclear weapons will be used against an attack on Indian territory, or on Indian forces anywhere, in which nuclear, or chemical weapons are used. There is no ambiguity about the Indian doctrine. An attack on its territory, or armed forces, in which nuclear weapons are used, irrespective of whether they are low-yield tactical nuclear weapons, or strategic high-yield nukes, will face a massive nuclear response. The Pakistani civilian and military elite in Punjab will find the costs of an Indian response, to Pakistan’s use of low- yield tactical nuclear weapons against Indian forces anywhere, not merely “unacceptable”, but also “unbearable”. Pakistan will be very foolish to test out Indian resolve to respond massively to its use of tactical nuclear weapons.

Pakistan will be particularly well advised to bear the reality in mind that its Punjab province, where both its civilian and military elite live, is densely populated. Its cantonments facing India are in this province. Moreover, Pakistan’s army has mounted military operations, involving the use of air power in certain cases, in populated areas of its three other provinces — Khyber Pakhtunkhwa, Baluchistan and Sind. Thousands of innocent Pakistani civilians have perished in the damage the army has inflicted. The Punjabi army elite evidently regards people in these provinces as less than equal — a mindset that cost them dearly in Bangladesh. In seeking to dominate the Pashtuns in their homeland, the Punjabi-dominated army seems to forget that historically, it is only the Sikhs in Punjab who have prevailed over the Pashtuns, till the Khyber Pass. It is self-evident that Gen Raheel Sharif is no Hari Singh Nalwa, who led the forces of Maharaja Ranjit Singh.

Dealing with Pakistani nuclear illusions and delusions needs a multi-pronged approach. First and foremost, Pakistan should be presented a stark picture of what would happen to its Punjab province, if it resorts foolishly to nuclear adventurism, whether tactical or strategic. Diplomatically, India should expose the consequences to global nuclear safety and security of Pakistan’s refusal to join the Fissile Materials Cutoff Treaty. Given the Islamist inclinations of its nuclear scientists and a wide  cross section of its Punjabi military-nuclear establishment, and their past proliferation record, it will be necessary, for responsible countries, to seriously take note of the dangerous implications of Pakistan’s nukes falling into wrong hands. An equally serious effort needs to be undertaken to expose China’s role in the development and expansion of Pakistan’s nuclear and missile arsenal. China, which has violated every international norm to curtail proliferation of missile and nuclear weapons technology, believes it is not accountable to anyone, because it is a Permanent Member of the UN Security Council. This arrogance, by a country that professes to be a votary of peace, needs to be exposed.