Free comes at the cost of freedom. 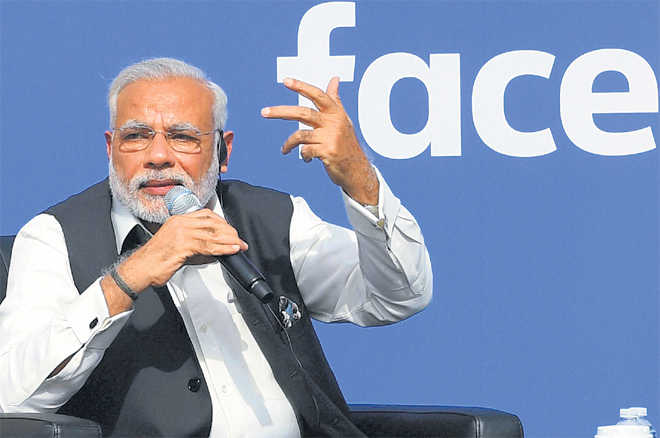 Narendra Modi speaking at the Facebook HQ in California. PTI

Free comes at the cost of freedom. Never has this been as apparent as nowadays, ever since Cambridge Analytica was first exposed as a purveyor of Facebook data that is used in the worst possible manner to “win friends and influence people” for its clients. It also subverted democratic impulses and processes in the US, the UK, and possibly in India, too. It has shown contriteness by inserting full-page advertisements in the US and the UK, but not so in India. This despite Union Minister for Electronics and IT Ravi Shankar Prasad's announcement that, if needed, he would summon Mark Zuckerbergonce feted by the political elite, including Prime Minister Narendra Modi.

Now, Modi's official mobile app has been found to be sending personal user data to a third party without the users’ consent. Later, the Congress party deleted its app, as the blowback threatened to engulf it. Even as the predictable Congress-BJP slugfest has started, there is little doubt about the substance of the allegations, made by a cybersecurity analyst who uses the pseudonym Elliot Alderson. Elliot, it may be recalled, is the same person who had also recently pointed out vulnerabilities in the “infallible” Aadhaar. Thankfully, no FIR has been filed against him so far.

Unfortunately, privacy was given a short shrift in developing the app that has around 50 lakh downloads on Google’s Playstore used for smartphones that use the popular Android operating system.

What was, till now, an esoteric argument, largely confined to nerd-dom, has acquired mainstream dimensions, as the damage done by the model that exchanged personal data for free services was exposed. It now turns out that we have been naïve in believing the Internet giants, even those whose company motto professes to “do no evil.”

Once vast quantities of data were available to these companies, they used it to monetise their operations, seemingly benignly by targeting advertisements for specific consumers who would be interested in such products. Consumers’ data was shared with other entities, and this enabled firms like Cambridge Analytica to ‘misuse’ it. Facebook knew that its data had been in wrong hands and that it had been misused, but it ignored the problem.

Issues that consumers were dealing with have now acquired a different hue ever since political interference has come to light. It has obviously been wrong to trust technology giants to do the right thing. Oversight is necessary and is belatedly coming to the sector, unfortunately after much damage has been done. The integrity of the IT industry is being questioned, and Facebook alone has seen its stocks take a $50-billion dive.

Even as consumers, understandably, voice concern about the misuse of their personal data, they need to take a look at their own consumption pattern. The first impulse after spending a lot of money on a smartphone is to download cool new apps. Naturally, if they are free, so much the better. For most smartphone users, free apps are the norm to an extent that they would simply not pay for anything… just look for a free alternative if asked to subscribe.

The cost of freebies

Seldom is any consideration given to the cost of such freebies. This is changing now. The real-world consequences of cyber manipulation are now evident. President Donald Trump’s credibility has been deeply affected by revelations of Russian interference in US presidential elections. The UK is looking at the Brexit vote, and Indian political parties are distancing themselves from the toxic topic.

If all this seems too distant, it is not. Data integrity should be a concern for all of us and we must make sure that we take an informed stand. We all know that there are no free lunches. The allure of free apps needs to be examined, if not resisted. Those who make such apps for public entities like political parties and the government need to be very vigilant about what they are garnering since their actions are and should be open to public scrutiny.

The Prime Minister’s app should not be sharing data with foreign entities, especially since this government espouses an ultranationalist outlook. Was not a foreign hand seen in a UPA budget that had American spellings somewhere? It was probably the result of MS Word working on a US setting, a common enough issue in India. Much hullabaloo ensued. Now that we know that the data went to foreign shores, we must find out more, and the citizens of India, too, must have a clear, transparent answer. In the four years of Digital India, various government programmes, including Aadhaar, are not secure enough, and we have not been able to secure the backbone of the Internet as it runs through India.

The government owes us an explanation. It has to do more to ensure the security and integrity of Indian citizens’ data. Consumers, too, have a responsibility. Think before clicking “Yes” for the cool apps which others are using or the ones that we have read about. Most such apps are free and, therefore, greed naturally takes over. What we don’t dwell on is the cost of this freebie. It can be more than we bargained for.