WE are living in historic times where having a flawless speedy internet connection is prioritised more than having strong interpersonal relations. WE are living in historic times where having a flawless speedy internet connection is prioritised more than having strong interpersonal relations. The world has indeed changed dramatically with the invention of internet and the subsequent introduction of social media. Networking giants have actually initiated a revolution of sorts by seamlessly penetrating into our daily lives without any hiccups or inhibitions. Today, everything is available everywhere at the click of a button on our cellphones whose manufactured smartness has outwitted the genetic smartness of the human race. In this scenario of fast-paced lifestyle behaviours, the traditional criminals and law-breakers have also conveniently taken a leaf out of the evolving book of technology and succeeded in outsmarting the police and other law-enforcement agencies on many counts.

Nowadays, social media asserts its presence through Facebook, Twitter, Instagram and various other similar networking websites to such an extent that it has become virtually impossible to ignore its impact on society as well as law and order.

A number of crimes which were once unheard of in the times gone by have become routine. Identity thefts, hacking, cyber stalking, cyber bullying, cyber terrorism, data theft, online banking frauds, virus attacks, ATM tricks, fake calls, call spoofing,  etc are on the rise. Recently, the world was stunned beyond its grief-stricken astonishment when the Orlando shootout took place. The shooter Omar Mateen had been radicalised by the social media. Some criminals looted the Bangladesh Central Bank of more than $100 million. The heist happened without anybody physically entering the coveted bank as the entire money was siphoned off electronically.

Even in India, scores of ATM frauds and banking duping tricks being unleashed by internet-savvy new-age fraudsters have become commonplace. The innocence of social networking websites is being manoeuvred by criminals for a plethora of wicked activities. The most common form of crime being reported on Facebook and similar websites is the activity of fake profiles that are generated by certain vested interests to either malign the reputation of  a specific target person or harass them ( usually girls) to pressurise and extort some money out of the victims by threatening to post their family photographs or even morphed nude pictures in the public domain.

The power of the internet or social media is also being misused to spread misinformation campaigns and create confusion, panic and unwanted distress amongst the general populace. For example, many notorious mischief makers regularly use the Facebook and twitter etc to stir the emotions of masses. This leads to agitations, dharnas and road blockades, thus further threatening to disturb the delicate law-and-order situation in the country. This was witnessed in Punjab during the recent events of Ghallughara commemoration in Amritsar and incidents of the sacrilege of Guru Granth Sahib. Also, the recent verbal clashes between the Shiv Sena and the Sikh hardliners on social media channels like You Tube, etc was enough to add fuel to the fire and stoke the possibility of communal riots across the state.

In the recent past, the government did well to suspend the internet facilities during the Jat agitation in Haryana and the Patel andolan in Gujarat. Even in Jammu and Kashmir, the internet is being fully exploited by the extremist elements to reach the youth, indoctrinate the masses, and thus glorify and eulogise their so-called "sacrifices" or pseudo martyrdom to tap the emotional reservoir of people's sentiments, win their support and finally misuse them as a protective shield to facilitate their safe passage at any encounter site as hundreds of people gather speedily at the shoot-out places and form a human chain in order to help the terrorists escape from the Army.

Similarly, it was discovered that a dreaded terrorist organisation was using a communication application called SIGNAL to exchange information between its cadres in Iraq and Syria and thus escaping the scrutiny of legal investigators. Most of the criminals these days use WhatsApp as a medium to communicate or call each other as they know it will be difficult to track their message movements or put their calls on surveillance by the police authorities. The end-to-end encryption offered by WhatsApp is a big headache for the security agencies worldwide. Moreover, the privacy features offered by mobile phone makers like Apple's I-phones, etc create a giant hindrance in solving or decoding the criminals phones by the forensic investigative departments. Even the FBI was lately locked in a legal battle with the Apple in USA's Supreme Court as the company was unwilling to cooperate under the garb of protecting its privacy issues. Keeping in mind the astronomical advancement in technology and the reach of the internet, it has become highly imperative to shrug off the old methodologies of policing and simultaneously adopt and put into practice the newer ways of catching the tech-savvy criminals.

A proper system needs to be conceptualised whereby the police manpower is properly trained to  collect scientific digital evidence and also maintain its due surveillance and rational censorship over the inflammatory, malicious and derogatory content circulating over the internet and quickly trace the offenders at the drop of a hat. In the world of internet, time is of crucial importance. The coordination between the telecom companies, Internet Service Providers and the police needs to be revitalised to rein in the negative consequences. The conventional battle between the criminals to race away and the police to chase them, has acquired invisible dimensions altogether. The famous old mouse vs rat game (cop vs criminal )  has to be played differently by the police now to get the desired results. Anonymous internet crime is the new trending keyword worldwide and cyber policing is the password to win the game.

The writer is working as a senior Deputy Superintendent of Police in the Punjab government. 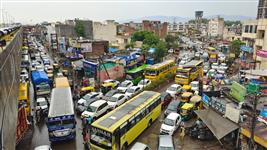