RECENT years have witnessed an alarming rise in authoritarian and majoritarian tendencies that threaten secular, liberal and democratic values, which one had started taking for granted. 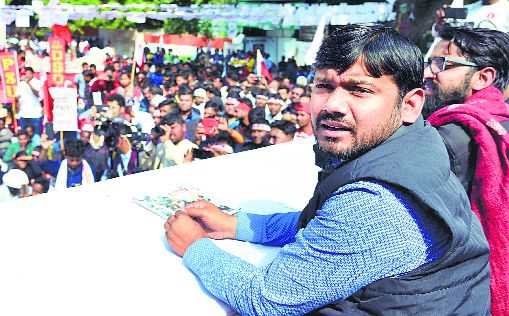 EXCEPTION: There have been few occasions in recent years when students have risen up against the government, such as the JNU protests of 2016 when Kanhaiya Kumar and others were charged with sedition.

RECENT years have witnessed an alarming rise in authoritarian and majoritarian tendencies that threaten secular, liberal and democratic values, which one had started taking for granted.

This onslaught by the powers that be has not gone unresisted. Farmers, backward communities, social, civic and legal activists, Opposition parties, a small section of the media and even institutions like the judiciary have fought back pugnaciously.

Yet, that might not be enough, because one vital group that traditionally strengthens the ranks of protesters and scares governments — urban students and youngsters — is missing in action. All through the upheavals that have agitated the nation during the tenure of the current government — Hindutva bigotry, lynching incidents, demonetisation, job losses, widespread farm and grassroots economic distress, intolerance, parochial cultural nationalism, the attack on independent institutions such as the CBI and the RBI, and even the recent war hysteria — urban students and youngsters have shown a curious apathy towards the political and social issues at stake.

The only occasions when students have risen up against the government on substantive issues are the FTII protests of 2015 when Gajendra Chauhan was appointed the institute’s Chairperson, the 2016 protests at Hyderabad Central University after Rohith Vemula’s suicide and the JNU protests of 2016 when Kanhaiya Kumar, Umar Khalid and others were charged with sedition.

Given the overbearing atmosphere and the ideological conflict currently prevalent in the country, one would have thought it is just the kind of situation which inspires or provokes youngsters to participate actively in resisting the misuse of power. The history of the 20th century is full of such instances where protests and agitations by the youth have erupted and influenced events — the anti-Vietnam protests, Soweto uprising, Velvet Revolution, Tiananmen Square demonstrations etc. In India, too, there have been notable student agitations that shook the political establishment, like the Navnirman Andolan in Gujarat and the youth protests during the Emergency in the 1970s, the Assam Students Union agitation in the 1980s, the Mandal Commission unrest in 1990, and the Anna Hazare and Nirbhaya protests which saw ample participation by students.

So, what explains the curious political passivity of students and the youth in urban areas at this juncture? Why do there seem to be no angry young men, railing against the establishment?

A certain naïve, lofty idealism is associated with most student protests — spontaneity and fearlessness that arise out of the belief in the righteousness of their cause. Could it be that riding on the back of our post-truth times, we are now fast approaching a post-idealism age? Growing up in today’s environment, maybe the urban youth face a loss of innocence at a far younger age than the pre-internet times, and a know-all cynicism takes its place. Perhaps there is a sense of fatigue and disillusionment with idealism itself — that the world and its power structures are what they are and idealism cannot change or overturn them.

The past few generations of urban students and youngsters have been brought up to think solely in terms of getting through college only to qualify for successful careers. In a sense, it’s a very narrow, material outlook on student life, which might permit distractions in terms of extra-curricular activities, but frowns upon cultivating wider political, cultural and social awareness because it adds no value to the pursuit of their career goals. Since materialism is the new ideal, political, social and cultural conformity is far more helpful for them in becoming achievers than rebellion in any form.

The rise of the middle class and its affluence and influence across all fields since liberalisation has coincided with the rise of the BJP as a political force. Most members of the middle class identify themselves with its brand of cultural nationalism, its anti-minority prejudices and its charade of being a clean party with a difference, even when it clearly is no different from any other. Quite naturally, therefore, the youth from urban, middle-class backgrounds feel an ideological affinity towards the BJP, which robs the group of that basic anti-establishment impulse and impetus that is essential for students and youngsters to be in ferment.

Simultaneously, socialist, leftist and centrist ideologies have been majorly discredited and eroded over the past few decades, not just worldwide but also in India. Its rhetoric and appeal is jaded, and its idioms (rich vs poor, workers vs capitalists, farmers vs landowners, students vs authority, bandhs, hartals, fasts, etc.) are too outdated to inspire students and youngsters. Thus, young men have no rival ideological options left, especially because the education system has not equipped them with the ability for independent thinking. Worse, a Right-wing party like the BJP has also smartly co-opted the populist templates and tactics of the Left, leaving neither a strong alternative world view nor effective methods of protest behind which the youth might mobilise against the government.

If the young have been politically neutralised by any of the above factors, then it’s a troubling prospect for Indian democracy. Unless, of course, the current passivity is simply waiting for Right-wing domination to reach suffocating levels before it is roused into confrontation.