Preparing for the next Balakot-type strike

Employment of air power in Balakot on February 26 this year ushered the air domain into the counter-terror response matrix. 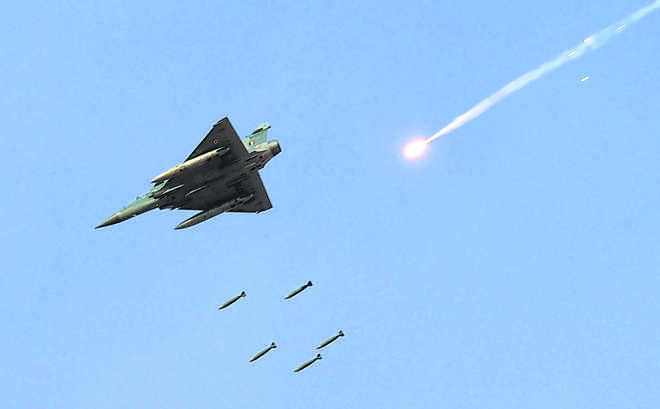 Employment of air power in Balakot on February 26 this year ushered the air domain into the counter-terror response matrix. Many nations consider airpower as the key element, among all military tools, in the war against terror since it offers a flexible, quick and timely response option without putting troops on the ground. India must consider extending the canvas of aerial targeting to the entire range of terror nodes, i.e. individuals, groups, camps, safe havens and launch pads etc to deter the perpetuators of terror. Cross-border terrorism isn’t going to get dissuaded with one aerial strike of limited liability and objective, however audacious and innovative it may have been.

The terror training camp at Balakot, on a hill top by the Kunhar river, away from populated areas, with clearly discernible buildings, fitted well into the air power’s targeting frame. The element of secrecy and surprise afforded an unintercepted run. Pakistan was inarguably caught napping in the air defence (AD) of their territory and now awakened to this new reality. They would have reworked their air defence dynamics. India will have to factor this augmentation, and any ingress in the immediate or near future would entail the risk of exposing aircrew to their defences. A different mechanism would be necessary.

Hitherto, each aerial ingress would require exceptional tactical shrewdness and intelligence agility to befuddle the Pakistani AD. Some options could be as follows:

(a) Manned fighters (Mirages and SU-30) heavily escorted with AD and electronic warfare (EW) escorts, standoff jammers under AWACS cover, i.e. a much bigger package with a lateral and vertical spread combined for greater protection based on the threat in the area of ingress.

(b) Air-launched cruise missiles like the BrahMos, a medium range (400 km) supersonic missile with a 300 kg warhead and a circular probability error (CEP) of one metre. The accuracy and its supersonic speed give it good momentum for better target penetration and no collateral damage. With a range of 400 km, most targets would come under its ambit even if launched from within its own side of the border.

(c) Unmanned combat air vehicle (UCAV), when inducted or developed. An indigenous solution could be the UCAV version of the BrahMos to be fitted on the Rustom II UAV. DRDO is developing a stealth UCAV called AURA which would be capable of launching missiles, bombs and precision guided munitions. Their effort could be expedited. Stealthy UCAVs would go undetected by Pakistani radars and yet do the job, particularly against individuals, groups and hideouts. In the future, employment of UCAVs for high-risk, high-payoff missions would expand the range of our coercive or punitive methods.

(d) Land-based cruise missile like the Nirbhay which has a range of about 1,000 km and can deliver 24 different types of warheads, depending on the mission’s requirement of between 200-300kg. With a 4m CEP, it has a good hit probability, without much collateral damage. Land-based or ship-borne cruise missiles would, however, run the risk of a similar retaliation from Pakistan. Considering that both sides have conventional and nuclear warheads on missiles, an undesirable escalation could accrue.

All the above options would, however, need to be supported by surprise, deception and cyber tools in the right combination. In Operation ‘Outside the Box’, the Israeli Air Force had used cyber techniques by employing electronic warfare technology like the “Suter network attack system” of the US Air Force which fed false targets and manipulated sensors of Syrian radars during their aerial strike on the suspected nuclear plant at the Al Kibar site in the Deir ez-Zor region of Syria on September 6, 2007. Similar systems would be required to be inducted/developed and employed to evade Pakistani AD.

The start point for counter-terror operations are intelligence, surveillance and reconnaissance (ISR) to illuminate the key nodes, individuals, groups or infrastructure and assign them as targets. A terrorist is an elusive target and affords only a limited window of engagement during which it must be found, located, identified and destroyed. This process is called the ‘kill chain’ and the entire operation is time-critical. Exploiting this time criticality needs synergising the entire gamut of capabilities, i.e. intelligence, surveillance, tracking, communications, air defence, decision-making and targeting. The key lies in merging intelligence with operations.

American counter-terror operations have their intelligence agency, CIA in the lead, since the first step is to identify the target using various intelligence methods, that is after sifting hundreds of intel reports, phone conversations, human intel and tip-offs.

The development of an air-centric counter-terror response has signalled a significant military aggression in our doctrine. This new aggressive approach to counterterrorism has sent a clear signal that terrorists would be sought and targeted wherever they may be. Such signalling must continue, for which airpower — with its inherent speed, range, stealth, precision weapons and employment capabilities — emerges as an appropriate tool.

Air power must be seen accordingly, and its capabilities developed with armed UAVs/UCAVs, air-launched cruise missiles, cyber tools, stand-off weapons and stealth technologies to support aerial counter-terror operations. This does not imply that airpower is the best military option to combat terrorism in all situations, nor does it imply that military strikes alone can win the war on terror. The way to win the war against terrorism is to make use of every resource at our command.