PRESIDENT Pranab Mukherjee is upset that Parliament is not doing its job. 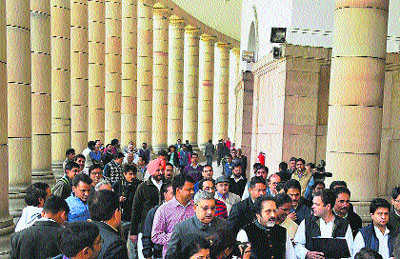 TAKES TWO: Both the government and the Opposition must ensure the House functions.

PRESIDENT Pranab Mukherjee is upset that Parliament is not doing its job. “For God’s sake, do your job,” media reported him as admonishing the parliamentarians. He is frustrated with the logjam in Parliament on the issue of demonetisation. He did not stop there. Elaborating on the nature of the stalemate and identifying the side responsible for it, he said, “Disruption means you are gagging majority. Majority never participates in this disruption. Only minority comes to the well, shouts slogans, stops proceedings and creates a situation in which the Chair has no option but to adjourn the House. This is totally unacceptable.”

Using the words minority and majority was unfortunate here and  also careless. In India, these words are generally used for two well-defined religious communities. It is widely believed that the “majority” in India is peace loving and orderly, it is the “minority” which is the disturbing element. The President, being a seasoned politician, knows how words acquire meaning in public discourse and could have avoided this description. Even if we treat it as a minor issue and come to the substantive part of his comment, we are forced to defer with him. We would need to remind him that Parliament is only one of the many elements which makes our democracy work. It is true as the President wants to convey to us that the job of Parliament is to frame policies and law. It is also true, as NR Madhavan reminds us, that parliametarians represent Indian citizens and on behalf of them are supposed to “discuss, debate bills, etc, that the government (or any private member) introduces, examine it carefully, and reach at the best option available to enact the best laws for the citizens and the country”.

Madhavan is imagining an ideal and rational situation when he says that there could be contending interests, conflicting objectives, but the role of MPs is to debate these issues and reach at the best possible ways to make laws.

He is again right when he tells us that the most important role of Parliament is to hold the government of the day, whichever party is in power, accountable for its actions, policies, etc. This is done by “asking them questions, seeking answers and putting everything in public domain and parliamentary records are preserved for posterity”.

The whole idea of this process is that you are arguing, trying to convince others about your point of view and if somebody else has a better point of view then they might convince you while you discuss and debate and find a way to enact the best laws.

Parliament is a forum for these processes. Madhavan is talking about an ideal situation where we have people ready to follow the rules of discussion. They are there not only to dominate and push others into submission, but are also willing to listen to the views which may not have the strength of number to back them.

It  has been said famously that a true democracy is one which does not privilege the majority but gives space and strength to the minority to be heard and counted. It is difficult to accept that our President does not see what all of us have been observing: that we have a majority in Parliament (after a very long time) which is arrogant, smug and dismissive of the concerns and views of the minority.

The President seems to take the comment of the Finance Minister lightly, who reacting to the Opposition demanding the presence of the PM and his participation in the debate, said demonetisation was here to stay and the PM would not come to Parliament to respond to the Opposition.

We understand that the President, by expressing his indignation is conveying his commitment not only to the form of parliamentary democracy, but also its substance. When you get a Prime Minister who goes to the public asking them to revolt against rajya shakti, the question of form becomes redundant. When he takes recourse to utter lies and tells the people that he is not being allowed to speak in Parliament, how do you counter him?

The President, who has counselled sanity in the last two years on more than one occasion, rushed this time  to  approve the action taken by his Prime Minister and exhorted people to trust him, not panic and follow the  guidelines. He could have resisted this urge.

The President is also the visitor of Central universities and other Central educational institutions. He should have pulled up the Ministry of Human Resource Development, which recently directed the heads of these institutions to enrol their students and faculty as volunteers of the government to propagate the idea of the cashless economy. He should have stood up to defend the autonomy of his institutions. He has not done that.

The President should have taken note that the government of Haryana is forcing its employees to practice cashless transaction. He should have reminded it that the crime of forced sterilisation during of the Emergency cannot be allowed to be repeated in this manner.

The President of the Republic of India is considered to be a person who would keep himself above the interests of the competing political parties. But his position is not amoral. His eminence gives him an opportunity to rise above the mundaneness of the times and say what is right. Unfortunately, contrary to the popular belief  which Premchand articulated, beautifully in his short story, Panch Parmeshvar, our eminent persons have generally failed to rise to the occasion.

One recalls the horrible days of 2002, when KR Narayanan, known for his scholarship and integrity, was in the chair of the President. Gujarat was burning and Parliament failed to respond to the urgency of the situation. The nation, as is said, was looking up to the learned President. Muslims of Gujarat wanted a healing word, a promise of justice from the highest quarters. The writers and intellectuals who felt that he was one of them wrote to him urging him to at least say a few words of assurance. Belying their expectations, he kept mum. He was not given a second chance even after this.

Let us not be formalists. When the majority bulldozes the minority, it has to shout and scream. It has to say it is not business as usual. These are not normal times. Only future will tell us  who rose to prove equal to his times.