OVER the past few decades, a ‘Silk Route’ has proliferated as a transit route for opiates. 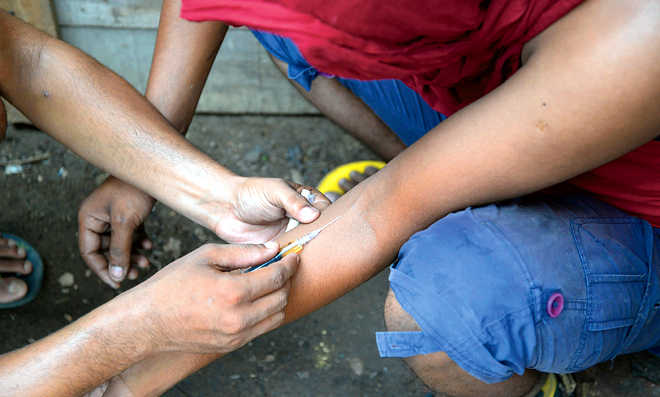 To nowhere: Over half of the drugs seized across the country are in Punjab.

OVER the past few decades, a ‘Silk Route’ has proliferated as a transit route for opiates. Prolonged militancy in Afghanistan encouraged opium growing since it was the best source of arms funding for the Taliban. Pakistan’s ISI saw merit in pushing much of the contraband across India under its policy of a thousand cuts. The forces manning the nakas had a field day and were known to sell a ‘happy hour’ of free access. Radicalism in Punjab made hay out of promoting transit through the vast farmlands to the metropolitan cities and the overseas. The jobless village youth found a way to make easy money, brought into the fold by being encouraged through addiction. This well-oiled machinery benefited all.

Smugglers of yesteryear, along the Mand — the riverine belt of the Ravi meandering across the border — saw monetary merit in shifting from gold to drugs. Under the nose of the monitoring agencies, transit cities across the state became prolific consumers. Even the roadside paanwala, chuskiwala and pansari started raking in moolah as stockists. An industry of cough syrup makers began to cater to addicts too. Pharmaceutical factories thought ahead, and began churning out injectables and capsules to cater to the next level of addicts as well. They learnt the refinement process to ship higher degree of lethal doses in the smallest packs and the maximum buck for the gram.

This nefarious trade refined itself, as did the contraband, over the current decade. Taking advantage of kabaddi championships and other opportunities, Canadian and other drug mafiosos, progenies of the erstwhile Punjabi NRIs — feigning interest in funding events in Punjab — made deep inroads, refined the drugs, introduced synthetic psychotropics, and built extensive networks. They misused the hospitality of their hosts and red-beacon car convoys. The political patronage of the locals, who clandestinely colluded with these merchants of death, ensured that those arrested did not get convicted.

In 2015, a study commissioned by the Union Ministry of Social Justice and Empowerment stated that the cause of the drug problem in Punjab emanated from ‘ties between the drug associations, organised criminal gangs, politicians and crook elements of the law enforcement agencies’.

Faced with limited job opportunities, fewer openings in the armed forces, substandard education and a farm economy in the doldrums, the young Punjabi population began looking for green pastures, on offer by the Canneda de bhaajees, and were allured. The youth succumbed to the temptation.

Alcohol consumption and raw opiates (bhukki) is not new to Punjab. For centuries, toil at the farm during the day, patialvi pegs or homemade desi in the evening, and hollering burrah while twirling the moustache, was the definition of a successful day. During harvest and sowing, a palmful of bhukki kept the spirits high and took care of fatigue. So, began the addiction. The dependence kept increasing, as did the craving for more, and stronger, alternatives. The next level was smack, heroin  (chitta), injectables and synthetic drugs. Some even started abusing prescription medicines, syrups and printing ink, before going for stronger substitutes.

The succession from the ‘first trial’ to ‘addiction’ is rapid. There is desperate need for funds; and stealing from home is next. The addict turns into a petty criminal indulging in snatching and picking pockets, and becomes a tool of exploitation by the suppliers of contraband. They become a curse to society, quickly mounting the crime ladder.

Mintu Gursaria is a case in point. Gursaria was a kabaddi player since the age of six. He took to drugs and the underworld and stayed immersed in it for 18 years. He talks of how he lost his entire family and friends. Jailed in 2010, he recounts that before he was able to overcome his addiction, he witnessed over 40 of his friends die of drug abuse. These included young men of various strata of society, including children from villages and cities, of politicians and policemen, among others. He lost his father and his brother to his drug abuse issues and the resultant criminal record. He admits with regret that his mother washed utensils of four generations just to make ends meet. Now a poster boy of drug rehabilitation, he talks about many homes along the border belt, where the only survivors are women. Luckily for him, a major accident that left him immobilised for long actually saved his life. He took responsibility and stopped consuming drugs. He talks about the disease and the need to counsel and rehabilitate aggressively.

The frustration of youth fosters this trade. Ill-equipped with skills, unemployable youth are hit by the grim truth about their capabilities. Middle-rung jobs are hard to come by and salaries are meagre. This is a frightening decoction for disaster — one that has been staring us all in the eye for years.

The border districts are conduits. Curbing supply lines will cull general crime. Considering the scale of the problem, convictions during the past decade have been low. The CAG report tabled in the Punjab Assembly in March enumerates 756 acquittals — 70 per cent of which were due to ‘deficiencies in testimony statements by police officials’. About 8,000 evidentiary samples, out of 10,642 cases, were delayed up to 476 days, holding up prosecution. Also, it is the addict who is arrested. The main players who foster the contraband trade seldom land into the net. While a proactive police and judiciary is imperative to get to the key players, the protection of witnesses and studious presentation of evidence is of equal importance. The gears of machinery need to work in tandem. The reach must be overarching.

While the government is committed to cracking down on drugs, the cartels are well entrenched in the system of governance and society, and have sustenance beyond political term. More than half of the drugs confiscated across the country are in Punjab. The war is a long-drawn one and daily battles may only dent the abuse, not end it. The purge needs to be taken to the cartels, the syndicates, the key accommodators holding high offices and even to source nations and passage providers. Until then, the tragedy of Punjab’s homes will continue and the tears will flow aplenty.