Pm Modi’s decision not to join the Regional Comprehensive Economic Partnership (RCEP) agreement was appropriate as it did not meet India’s current minimum requirements. 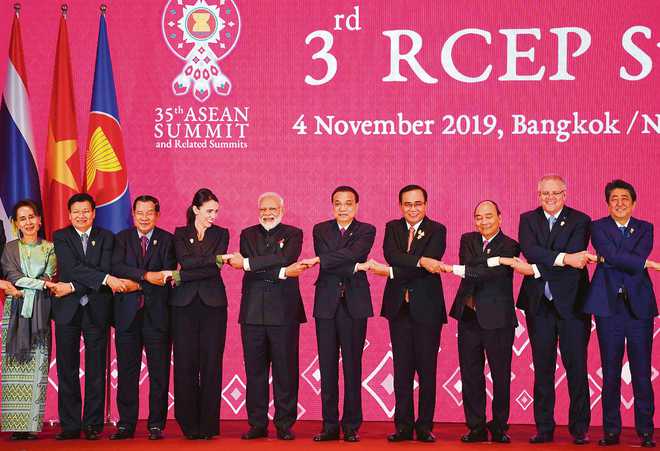 Delinked: It is time to push for comprehensive engagement with the Indo-Pacific, while clarifying India’s concerns which prevented it from joining the group.

Pm Modi’s decision not to join the Regional Comprehensive Economic Partnership (RCEP) agreement was appropriate as it did not meet India’s current minimum requirements. However, the fact that the 15 other countries finally decided that they would go ahead without India should lead to sober, realistic and comprehensive introspection on India’s economy and the country’s current position and standing in the Indo-Pacific Region (IPR), and also the rest of the world. This is because the RCEP may lead to the making of far more than a trade bloc; it may politically and strategically impact the IPR, increasing China’s influence, if not clout.

All power and success is relative. Thus while India has generally done well, China has done far better over the past three decades. Its economy is only second to that of the US. Its manufacturing base has made it almost the world’s factory. In recent years it has shown its technological prowess in some select areas to such an extent that it has alarmed the US. Its strong economy, among other reasons, has enabled China to become the pre-eminent power in Asia and cast a large shadow on the IPR. Many countries of the region chafe at China’s ways but their economies have developed a dependency on China. On the other hand, the Indian economy offers opportunities to Indo-Pacific countries but these are qualitatively different from their economic linkages with China.

There can be little doubt that the RCEP countries would have wanted India to be a member of the group: China too for economic and commercial reasons, the others, in addition to these on account of a need to balance China politically and strategically. Clearly, these countries had given India time in the past. Why did they not do so now? It would appear that they had either reached the conclusion that India would not ultimately join because of the nature of its economy or finally the Chinese cracked the whip. More likely, it was a combination of both factors. In any case the lesson to be drawn from this experience is that the Indo-Pacific countries are not willing to take a hit on what they perceive to be there economic interests linked to China, even while they may fervently wish for the elephant’s presence as a partial counter to the dragon!

The RCEP experience should not lead to the dilution of India’s Look East policy. Indeed, this is a time for pushing for greater and comprehensive engagement with the Indo-Pacific, while clarifying the nature of India’s concerns which prevented it from joining the group. These countries should be urged to be accommodative of these concerns, even while making it clear that the country is determined to modernise its agriculture and manufacturing sectors and developing as a major technological power. More importantly, there has to be greater involvement in strategic areas in the Indo-Pacific, and this includes the Quad process.

This is the time for India to remain diffident in moving ahead with Quad. In this context, it is good that senior officials of the Quad member states —India, Japan, Australia and the US —met on the sidelines of the East Asia Summit in Bangkok to take forward the thrust of the Quad ministerial meeting in September on the side-lines of the UNGA in New York. They underlined the need for a ‘free, open, prosperous and inclusive Indo-Pacific Region based on shared values and principles and respect for international law’. The officials also correctly emphasised that the Quad process did not wish to dilute ASEAN’s centrality in the region.

The way India should handle China is a regular and continuous exercise, and there are groups within government for this purpose. The RCEP experience has to be actively considered by them, notwithstanding the soothing noises that China is making on the issue. What is important is that China obviously wanted the agreement to go ahead and showed no concern to what India was saying. If anything, it viewed it in the context of its current ‘trade war’ with the US.

Like almost every current issue in India, the RCEP also became a victim of politicking. It would have been preferable to use this occasion to ask basic questions relating to our approach on the current state of our economy and commerce, at a time when global manufacturing processes are becoming transformed and the world is going through the fourth industrial revolution. Such introspection would have revealed that while in the almost three decades since India began to open up its economy, the country has been transformed and is now accepted as a crucial global player, with the capacity to project power in its own region and beyond significant areas of its economy—agriculture and associated activities, manufacturing sectors and technology and innovation—have lagged behind in terms of international competitiveness. The Modi government has ambitious plans to make India a $5-trillion economy and Make in India is a crucial part of that endeavour but that is in the future. For now, though, the fact is that significant parts of the economy need shelter and that, among other reasons, prevented the government from joining the RCEP after seven years of negotiations.

The history of this long negotiating process also needs to be examined not to indulge in political or bureaucratic finger-pointing but to make improvements in our internal intra and inter-ministerial coordination. Sometimes negotiations do drag to the wire but it is best to avoid such a situation. Were clear warnings given on red lines to all interlocutors to avoid bitterness or controversy? That is, after all, the object of diplomacy.