CHINA has got accustomed to violating India’s territorial integrity in J&K and Arunachal Pradesh. It transgresses international norms by supplying Pakistan with knowhow and designs of nuclear weapons and missiles. 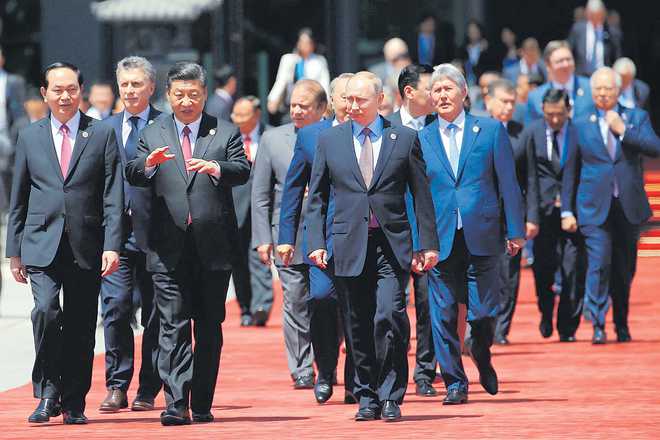 NOT ALL ROSY: Only 20 countries attended the OBOR Summit.

CHINA has got accustomed to violating India’s territorial integrity in J&K and Arunachal Pradesh. It transgresses international norms by supplying Pakistan with knowhow and designs of nuclear weapons and missiles. Its provocative behaviour includes protests over visits by Indian dignitaries to Arunachal Pradesh. China, meanwhile, welcomes political figures from POK and Gilgit-Baltistan on official visits. Beijing also seeks to undermine India’s relations with South Asian neighbours like Sri Lanka, Nepal, Maldives and Bangladesh, backing politicians and political parties known to be less than friendly to India. New Delhi is, however, now reacting in a more measured manner to China’s policy of “strategic containment”.

Ignoring warnings from China, India reinforced its claims to Arunachal Pradesh by encouraging a high-profile visit to the state by the Dalai Lama, who acknowledges it is an integral part of India. The Dalai Lama pointedly visited Tawang, which has special spiritual significance for Tibetans. But the proverbial last straw on the Indian camel’s back is the China-Pakistan Economic Corridor (CPEC), involving an investment of around $51 billion. CPEC challenges Indian sovereignty by traversing through Gilgit-Baltistan, as part of Beijing’s larger Eurasian OBOR project.

India cannot ignore the security threat that this project poses as an integral part of a China-Pakistan axis to contain India across the Indian Ocean region. Accompanying this project, has been the laying of a fibre-optic cable connecting China’s PLA in Kashgar in its Xinjiang province and the Pakistan army’s GHQ in Rawalpindi. CPEC enhances the communications between the armies of China and Pakistan. It provides Beijing the road link to the Port of Gwadar, which has been handed over to it by Pakistan. China has also agreed to provide Pakistan with a large number of frigates and submarines. Gwadar is significantly located alongside the maritime routes for oil supplies to India from the Persian Gulf. China’s Maritime Silk Route, which complements OBOR, traverses across India’s shores in the Indian Ocean from the Straits of Malacca to the Gulf of Aden. China is evidently seeking to surround India with a “string of pearls” comprising base facilities at Kyaukpyu in Myanmar, Hambantota in Sri Lanka, Gwadar in Pakistan, Mombasa in Kenya and Djibouti in the Gulf of Aden. The Chinese modus operandi is clear from what transpired in Sri Lanka.  China undertook financially unviable projects in President Rajapakse’s constituency and pushed Sri Lanka into a debt trap. Unable to repay the debt, Sri Lanka was compelled to hand over both the port and neighbouring industrial area to China in a debt/equity swap. Despite this having triggered protest riots in Sri Lanka, China sought to berth a submarine in Colombo when Mr Modi was visiting the island.

After carefully graduating its response to CPEC, India finally came out publicly with a statement which objected to not just the fact that CPEC violates our territorial integrity, but also appears to be a project whose exploitative terms would render the recipients bankrupt. The External Affairs Ministry’s spokesman suggested, just prior to the OBOR Summit in Beijing, that the project was not based on “universally recognised international norms”, adding that it appeared to violate international norms of “openness, transparency and equality”. The statement also suggested that the project does not meet principles of financial responsibility which require avoidance of creating unsustainable debt in recipient countries.  India noted that connectivity projects should involve transfer of skills and technology and respect “sovereignty and territorial integrity”. Like its decision on taking the Kulbhushan Jadhav case to the ICJ, the government’s decision to not attend the OBOR Summit in Beijing was predictably criticised by the same critics. Ominous warnings were voiced that India would now find itself “isolated” by taking on an all-powerful China.

What transpired was somewhat different. Only 20 countries, mostly from South and Southeast Asia and Africa, attended the conference at the summit level. Given his dependence on China, President Putin was the only major world leader present.  This, despite the fact that Russian academics and others had expressed serious reservations on the OBOR traversing through the Eurasian belt, major portions of which have historically been regarded by the Russians as their backyard. Chinese pettiness and petulance was evident when they expressed their displeasure by not inviting the respected PM of Singapore, Lee Hsien Loong, who had the courage to say that territorial disputes in the South China Sea should be settled according to international law. The navies of India and Singapore held joint exercises in the South China Sea shortly thereafter. Moreover, within the OBOR conference, the Europeans and some others were quite vociferous.

The EU has strongly criticised China’s international trade and economic assistance policies. Senior EU leaders have made it cleat that they believe that the OBOR project lacks a formal structure and that China has shown lack of transparency. The EU is skeptical about China’s motivations and its terms of trade and economic cooperation. EU functionaries feel Chinese policies are mercantilist. The UN Economic and Social Commission for Asia and Pacific has, meanwhile, warned of high financial risks in several OBOR projects. There are now voices even in Pakistan, warning that CPEC is going to result in Pakistan being confronted with an unsustainable debt burden, with apprehensions that it will be forced to go the Sri Lanka way. More importantly, there is growing realisation internationally that China is not a 21st century Santa Claus and that the OBOR project is predominantly an effort by China to rebalance its economy and provide jobs for the vast labour and construction industry that it has developed which are now running out of opportunities and business within the country.

It is now time for India to work with Japan, the US and the EU to coordinate their efforts to actively promote alternatives to Chinese economic exploitation in Asia and Africa. Moreover, Russia needs to be coopted bilaterally and through funding by institutions like the BRICS Bank and the Asian Infrastructure Development Bank, for constructing transport corridors through Iran to Afghanistan, the Caspian and Central Asia. The US has renewed its proposal for a “New Silk Route” across Asia, which India had welcomed. Finally, India and Japan should jointly build a transportation and industrial corridor to the shores of East Africa, where Mr Modi’s visits have set the stage for expanding economic, industrial and energy cooperation across the Indian Ocean. China will have to learn that true economic development comes from transparent multilateral cooperation and not bilateral economic exploitation.