At 10.30 am on 28th August, 51 years ago, a group of soldiers of the Army’s 1 Para led by Major (later Lieutenant General) Ranjit Singh Dayal wrested control of the Haji Pir Pass in Jammu and Kashmir, which for 18 years after partition had been under Pakistani occupation. 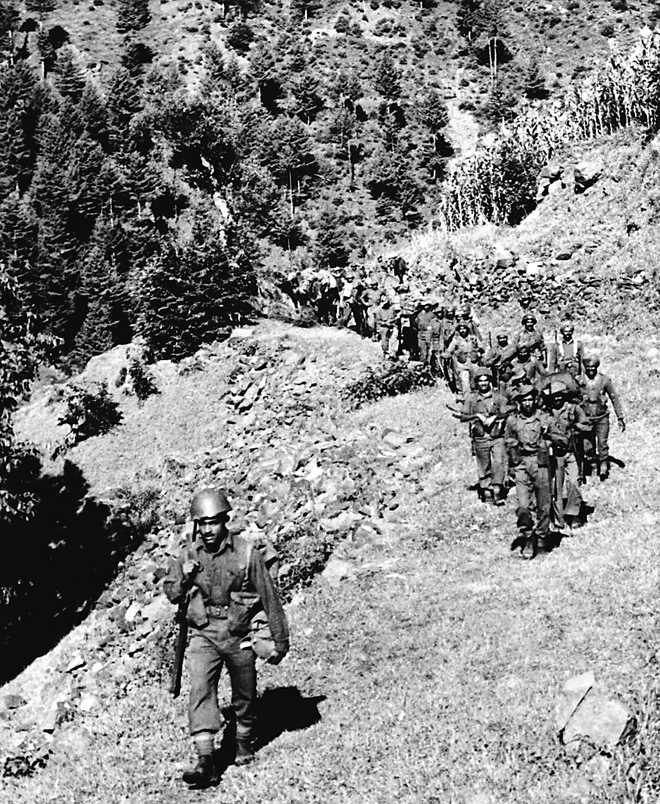 51 years ago, the Indian Army wrested this pass in a 37-hour blood-and-guts battle in fog, rain and steep terrain

At 10.30 am on 28th August, 51 years ago, a group of soldiers of the Army’s 1 Para led by Major (later Lieutenant General) Ranjit Singh Dayal wrested control of the Haji Pir Pass in Jammu and Kashmir, which for 18 years after partition had been under Pakistani occupation. A Pakistani counter attack the next day was effectively repulsed and by August 30, the Indian Army had established complete control over the Pass along with most peaks in the vicinity. It was, however, only with the capture of Kahuta in the vicinity on September 10 that the mouth of the Haji Pir Bulge was closed, the entire sector sealed and Pakistani resistance in the area brought to an end.

The initial victory had come after a 37-hour pitched battle by a stubbornly brave and innovative 1 Para against all odds comprising rain, slush, fog, a steep hostile terrain and, of course, enemy fire. The attack was part of a multi-pronged assault by a total of five Infantry battalions supported by the equivalent of two Artillery regiments to take the geographically and militarily important Haji Pir Bulge of which this Pass is the central feature. Interestingly, the taking of the Pass marked the Army’s only decisive and successful offensive military action undertaken from start to finish during the entire duration of the 1965 India-Pakistan War that had unofficially begun on 5th August with the first detection of Pakistani infiltrators and formally ended with an UN-directed ceasefire on 23rd September.

The 8,652 feet high Haji Pir Pass, a dominating feature located on the western fringe of the formidable Pir Panjal range that divides the Kashmir Valley from Jammu region, provides a direct road link between Poonch, located west of the Pir Panjal in Jammu region, and Uri, located across the mountain range in the Kashmir Valley. Apart from significantly reducing the road distance between Poonch and Uri to just 56 km compared to the current 282 km long revived old Mughal route via the Poonch Valley, Shopian and Srinagar, the Haji Pir Bulge provides a direct ingress to both the Jammu region and the Kashmir Valley. And it is through this since militarily heavy fortified Pass, infamously returned to Pakistan five months after its capture, that Islamabad has been infiltrating terrorists into J&K for the last 27 years.

The taking and return of the Pass is both as spectacular as it was infamous, respectively, in India’s military and diplomatic history. The military operation was necessitated because Pakistan then, as part of its dubious Operation Gibraltar, was using the Haji Pir Bulge to launch the main influx of its infiltration campaign into the Kashmir Valley. Pakistan had then also built huge stocks of arms, ammunition and supplies at several places in the Bulge for speedy administrative support to various raider groups. Thus the offensive action was intended to neutralise their logistical set up and plug ingress routes of the infiltrators. Five days before the launch of the attack, then Army Chief, General JN Chaudhury had emphasised on the necessity to take offensive action to throw the Pakistani Army off balance and compel it to react instead of India dancing to Pakistan’s tune as New Delhi had been doing until then.

The capture of the Haji Pir Bulge did put a dent in infiltration and unbalanced the Pakistanis. But then Pakistan’s grand design, as revealed three days later, involved launching Operation Grand Slam on September 1 comprising a major armour and Infantry thrust in blitzkrieg style reminiscent of Hitler’s Wehrmacht in the carefully selected Chhamb-Jaurian sector to capture the solitary bridge in Akhnoor followed by the town itself on the Jammu-Poonch highway. They were to then head to Jammu to capture the Jammu-Srinagar highway. In doing so, Pakistan would have wrested control of the land route to both the Jammu region and the Kashmir Valley thus severing the state from the rest of India. The plan was sound and the Pakistani Army nearly succeeded against an unprepared Indian Army that characteristically was lacking prior intelligence and was unable to militarily fully appreciate and anticipate the situation.

It was only after the Indian Army’s XI and I Corps, much to Pakistan’s surprise, crossed the international border into Pakistani Punjab and headed towards Lahore and Sialkot, respectively, on September 6 that India got much needed relief and was able to prevent a catastrophe. Pakistan responded by immediately withdrawing a major portion of its medium armour and artillery along with an Infantry brigade that saved Akhnoor bridge from capture in, what then Western Army Commander Lieutenant general Harbaksh Singh terms, ‘the nick of time’ in his book War Despatches.

The Tashkent Agreement signed on January 10, 1966, entailed the withdrawal of armed forces personnel to positions that existed prior to August 5 1965. This status quo ante included return of the bravely fought Haji Pir Pass captured with considerable grit and determination not to forget human and material cost. Some Indian Army officers point to that fact that had it not been done, the Indian Army would have then found the Pakistani Army permanently positioned just 4 km from Akhnoor making it possible for them to swiftly attack the area later on. India missed the bus in 1971 when it could have attempted to recapture Haji Pir. By returning the Pass or not subsequently regaining it, India lost a strategic advantage. As late Lieutenant General Dayal, the hero of the Battle for Haji Pir, subsequently said, “The Pass would have given India a definite strategic advantage. It was a mistake to hand it back. Our people don’t read maps”.