RTI Act: Perils of ignoring the past, and how : The Tribune India

RTI Act: Perils of ignoring the past, and how

IT is said, and rightly so, that the past is not a reliable guide to the future. 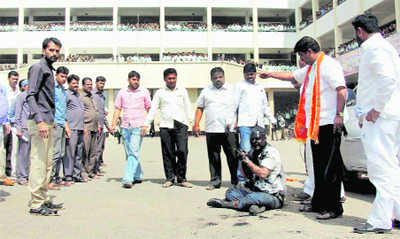 Resistance at a cost: Shiv Sena workers assault and blacken the face of an RTI activist at Latur,in Marathwada, after he exposed an illegal construction case. PTI.

IT is said, and rightly so, that the past is not a reliable guide to the future. It is also true that if we try and plan for the future while ignoring the past, we may keep rediscovering the wheel. Reading about the roadmap that Vijai Sharma (October 25, 2016) has "carved out" for the future of RTI, gives a sinking feeling that the past is being ignored. It is true that the Right to Information Act, 2005 was passed unanimously by the Parliament on May 12, 2005. It received the assent of the President on June 15, 2005, and came into force on October 12, 2005.

However, it is also true that once it came into force and started being used by people at large, the government, both the bureaucratic and political wings, have been uneasy.

There have been repeated attempts, earlier by the UPA government and now by the current one, to render the Act totally ineffective, often under the garb of making it more effective.

These attempts have been vigorously resisted by the community of RTI users and activists, at least so far. These attempts come almost at random. Sometimes they start with a seemingly innocuous move by one the departments in the government which then gathers momentum. Sympathisers to the cause of trying to undo the Act join the bandwagon and the move acquires and a life of its own. The community of RTI users and activists get wind of the move from somewhere and start attempts to counter it. Sometimes this is fed by the commonly observed tendency in former bureaucrats, particularly those who seem to have a strong desire to curry favour with the powers-that-be, to recommend a drastic overhaul to the system the fruits of which they have themselves enjoyed till the age of superannuation. The "roadmap" carved out by Sharma is full of pious homilies and delightful examples of bureaucratese which remind one of the delectable Sir Humphrey Appleby of the Yes, Minister and Yes, Prime Minister fame. Sample: “An openness to sharing information is vital for human welfare;” “Rationalisation induces fairness;” “Questions abound;” “A wealth of data, whether on crime or weather, mandi-trade or sectoral datasets, is accessible on government's open-data-portal;” “A fall-out is that information flow has become needlessly voluminous making the application-driven system operationally unsustainable;” "An easy-to-use cost-effective lifeline for many, the multi-tiered RTI system;" “MGNREGA and land acquisition exemplify availability of information at various levels of usage, but it is doubtful if citizens are utilising this window adequately to hold the public authority accountable. Sub-optimal functioning has to be flagged;” “An appraisal of past implementation will help identify the legal and institutional gaps to be plugged.”

The ultimate in giving advice which one does not oneself follow is what Sharma calls “a CIC decision, presently dormant (which) directed information disclosure from national political parties as public authorities.” The advice he gives is: “A beginning can be made with electoral funding accountability under RTI that includes political parties with legislators even if the parties fall short of meeting the 'national political party' criteria.” What is not divulged in the piece is how the decision became “dormant”.

The full bench of the CIC that made this momentous declaration of the ineffectiveness of the CIC was headed by Sharma himself!

This is how the CIC decision of June 3, 2013 became “dormant.” That is why the advice that he gives now that: “A beginning can be made with electoral funding accountability under RTI …” sounds a bit strange. One wonders why this beginning was not made in March 2015, particularly when it was brought to the attention of the full bench of the CIC that a combined reading of Sections 18, 19, and 20 of the RTI Act bestowed ample powers to the CIC to get its decision implemented? It is appropriate that Sharma should point out "…shield(ing) behind ‘public authority’ legalese,” since he has attempted to do exactly that in the CIC decision of March 16, 2015.

The first part of his last sentence, “Legislative intent will guide …” is valid, and the remaining “… but whether this would resonate with wider transparency expectations, say, having an RTI protocol for political parties, is a question,” will be decided by the Supreme Court, where the matter now rests. The petitioners have filed a PIL, seeking implementation of the CIC's decision of June 3, 2013, which Sharma rendered “dormant.”

The writer is a founding member of the Association for Democratic Reforms. The views expressed are personal.