THE year 2018 was an uncertain one for India with respect to terrorism. Sharp gains were registered in several theatres, and significant reverses in others. More dangerously, an undercurrent of growing potential risk enlarged in wide areas, including many that had seen sustained state consolidation over the past years. 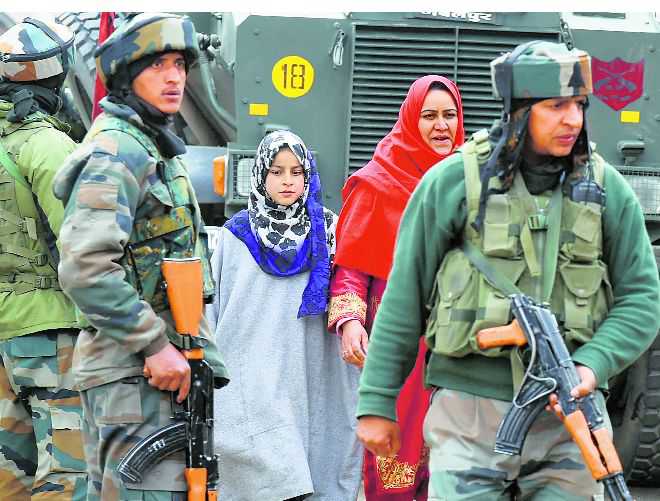 Bloodbath: 451 people were killed in terror-linked violence in J&K in 2018, the highest figure in a decade.

THE year 2018 was an uncertain one for India with respect to terrorism. Sharp gains were registered in several theatres, and significant reverses in others. More dangerously, an undercurrent of growing potential risk enlarged in wide areas, including many that had seen sustained state consolidation over the past years.

At least 941 terrorism and insurgency-linked fatalities were recorded by the South Asia Terrorism Portal (SATP) across the country last year, against 805 in 2017. The surge in casualties was principally in Jammu and Kashmir, up from 358 in 2017 to 451 in 2018. In the Maoist belt, the toll rose from 332 to 415. The North-East, with a multiplicity of degraded insurgencies continuing to provoke occasional violence, witnessed 72 deaths in 2018, while these were 103 in 2017. Punjab, which had seen no Khalistani terrorism-linked fatalities between 2008 and 2015, has registered deaths in this category each year since, with three persons killed in 2018 (one incident), six in 2017 (five incidents) and three in 2016 (three incidents). However, 34 persons have died in Pakistan-backed Islamist terrorism-linked incidents in Punjab in recent years — 10 in the Dinanagar (Gurdaspur) attack of 2015; 22 in the 2016 Pathankot airbase attack; and two infiltrators in 2017.

The sustained escalation in J&K, after violence bottomed out with 117 fatalities in 2012, has largely been the consequence of polarising politics and continuous policy failures, primarily on the part of the present dispensation at Raisina Hill, culminating in the imposition of President’s Rule. It is significant that recourse to this desperate measure has been considered necessary in the state after over 22 years. The state was under President’s Rule between 1990 and 1996, at a time of enveloping chaos. 1996 saw as many as 2,903 terrorism-linked fatalities in J&K, the highest figure till that point. The situation worsened in 2001-03, with deaths exceeding 3,000 each year, and peaking at 4,507 (2001), and yet President’s Rule was not considered necessary. While the casualties have been rising steadily since 2013, the state is nowhere near the conditions of breakdown that could have justified this move.

Other indices of policy failure in J&K are in evidence. With 451 killed in terror-related violence in 2018, this is the highest number in a decade (the figure was last exceeded in 2008, with 541 killed). Civilian fatalities at 86 are the highest last year since 2007, when 164 civilians were killed. While the government is eager to highlight the rising number of deaths of terrorists in the state (259 killed last year), the security forces lost 95 personnel in 2018. With constitutional politics in suspension, partisan mischief led by the ruling party in New Delhi is mounting. With Assembly and parliamentary elections due in a few months, disruptive politics can only intensify, with a concomitant escalation in violence.

While the total fatalities in Maoist-affected regions did register a significant escalation between 2017 and 2018, rebel casualties accounted for the entire increase (from 150 to 231). Both civilian and security forces’ deaths registered a marginal decline, from 109 to 108, and from 76 to 75, respectively. Unsurprisingly, the Union Ministry of Home Affairs (MHA) has reduced its list of ‘worst Maoist-affected’ districts from 36 in 2017 to 30 last year, and of Maoist-affected districts from 126 to 90. There has, moreover, been a growing number of surrenders and arrests, indicating increasing demoralisation among Maoist forces. By and large, the process of consolidation against the Maoist insurgency is continuing apace, though the rebels retain capacities to inflict occasional and devastating attacks on the security forces.

According to the SATP database, with just 72 fatalities, 2018 recorded the lowest figure in the North-East since 1992. The previous low of 103 deaths was registered in 2017. At its peak, the North-East accounted for 1,696 insurgency-linked deaths in 2000. The toll in 2018 included 18 civilians, the lowest registered in this category since 1992. The maximum number of civilians killed in a year, 946, was in 2000. Nevertheless, polarisation on religious and linguistic lines has sharpened in Assam in particular and the region at large ever since the Supreme Court-monitored exercise of updating the National Register for Citizens (NRC) was initiated in 2015 to identify bona fide residents of Assam. The final draft NRC, published on July 30, 2018, has tentatively identified over four million persons whose nationality is suspect. Earlier, the first draft NRC, published on December 31, 2017, had left out 14 million people. Tension had mounted further due to the Centre’s ill-conceived move to push through the Citizenship (Amendment) Bill, 2016, which would legalise citizenship of ‘persecuted minorities’ — specifically including Hindus, Sikhs, Buddhists, Jains, Parsis and Christians — from Pakistan, Bangladesh and Afghanistan who had entered India before December 31, 2014. The Bill has already provoked significant mass political mobilisation and has been picked up by the militant United Liberation Front of Asom-Independent (ULFA-I) as a bone of contention. Any destabilisation in this sensitive region can only be bad news for the future.

Islamist terrorism outside J&K has been on the wane since 2008, though a rash of arrests across Delhi and Uttar Pradesh by the National Investigation Agency on December 26, 2018, revived the spectre of the Islamic State (IS, aka Daesh). The discovery and neutralisation of the incipient Harkat-ul-Harb-e-Islam (Movement for the War of Islam) underlines two sharply contrasting realities: first, that Daesh, with its apocalyptic vision and startling public brutality, retains some power to seduce elements on the extremist fringes of the Muslim community in India; and second, this mobilisation is of exceptionally poor quality, with conspiracies exposed at incipient stages, and with rudimentary capacities to do harm. Partial data compiled by the SATP indicates that at least 310 persons from India connected to Daesh have been identified since 2014. Of these, 88 have travelled to Iraq and Syria; 153 have been arrested; another 69 have been ‘detained’, counselled and released. 2018 recorded 41 arrests in connection with Daesh activity.

Terrorist and insurgent threats across India have substantially been contained. Where a measure of escalation is being registered, it is abundantly clear that this is the result of intentional destabilisation with a view to achieving short-term, partisan political gains, principally as a result of communal polarisation. These are self-inflicted wounds for which private citizens and security personnel pay the highest price, even as the most unprincipled of political players secure transient profit.