Assessments of President Xi Jinping’s visit to Pakistan have varied from characterising the visit as a “positive development” for India, to describing it as a “threat” to India’s security. 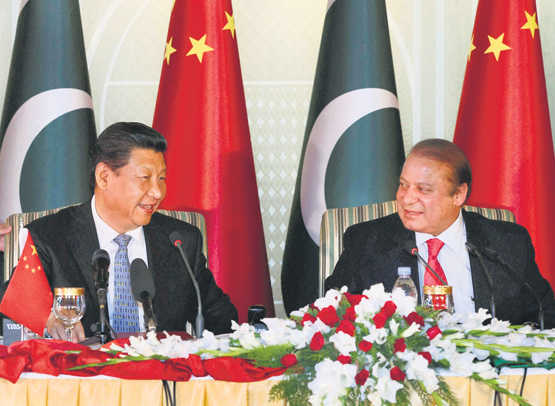 Assessments of President Xi Jinping’s visit to Pakistan have varied from characterising the visit as a “positive development” for India, to describing it as a “threat” to India’s security. Pakistani hyperbole outdid itself when a senior Pakistan diplomat gushingly described the relationship with China as “higher than the mountains, deeper than the oceans, stronger than steel, dearer than eyesight and sweeter than honey”. Nawaz Sharif described the relationship as “unique, unparalleled in the history of sovereign nations”. President Xi noted in Pakistan's Parliament: “Pakistan has stood on the frontline of the international fight against terrorism”. He called for elevating the relationship to an “all-weather strategic partnership”. Nawaz Sharif gushingly responded: “We are friends forever”!

The Chinese are supreme realists in assessing power equations within Pakistan. President Xi made the unprecedented gesture of separately meeting Pakistan's Service Chiefs, led by Generals Rashad Mahmood and Raheel Sharif.  He had no time to spare for Pakistan’s hapless and mostly invisible Defence Minister Khwaja Mohammad Asif! Mercifully, President Xi did not follow the precedent set by Afghan President Ashraf Ghani, who paid his respects to Pakistan's Generals by visiting their GHQ in Rawalpindi. We should be clear about the emerging contours of the Rawalpindi-Beijing military nexus. The strategically located Gwadar Port close to the mouth of the Straits of Hormuz is now leased for 40 years to China. President Parvez Musharraf declared in 2003, just after the visit of the then Chinese Prime Minister Zhu Rongji that India would find the Chinese navy positioned in Gwadar, in the event of hostilities.

China is bolstering Pakistan’s maritime capabilities. The supply of four frigates is to be followed by the supply of eight submarines. Not too long ago, a PLA Navy officer had warned: “The Indian Ocean is not India’s Ocean”. New Delhi will now have to look afresh at the security of its oil supplies. Given the past history of nuclear weapons and missile collaboration between China and Pakistan, India should realistically presume that China will assist Pakistan's development of plutonium-based tactical nuclear weapons. One need not, however, get too worried about Pakistan spending its scarce resources in acquiring Chinese equipment like its 1990s vintage JF 17 fighters. Moreover, scare mongering of facing a full-scale “two-front war” has to give way to planning responses for more realistic politico-military scenarios. President Xi's comments suggest a continuing Chinese policy of not acting against and indeed condoning the activities of India-centric terrorist groups operating out of Pakistan. This will be reinforced by the emerging US-China-Pakistan axis, working for "reconciliation" with the Afghan Taliban.

President Xi arrived in Islamabad, sounding like Santa Claus arriving with gifts to boost sagging Pakistani national morale. The $46 billion aid package to Pakistan includes the construction of a “strategic corridor” linking Kashgar in China’s Muslim majority Xinjiang Province, through the Pakistan Occupied “Northern Areas” of Gilgit and Baltistan, to Gwadar. Interestingly, the route of the strategic corridor, which traverses through Islamabad and Lahore (strongholds of Sharif's Muslim League) was repeatedly changed to avoid the turbulent areas of the Pashtun dominated Khyber-Pakhtunkhwa Province and Baluchistan.  China has been concerned about the safety of its nationals in these Provinces. Baluchi and Pashtun nationalists are not going to take kindly to this new routing. China has been assured that the Pakistan army will raise additional units to provide security for its personnel. India has inexplicably not protested to China for undertaking such a project through occupied Kashmir.

While the $46 billion “aid” programme announced during Xi Jinping's visit looks generous, there is considerable opacity about terms of repayment and other conditions attached to the implementation of projects involved. Apart from the much-touted Economic Corridor, the bulk of the activity is in the power sector, involving thermal projects fed by new coal mines, together with a few hydro-electric projects. These projects will reportedly add 10400 MW of capacity over the next 15 years. Development projects funded under overseas development assistance by Western donors and Institutions like the World Bank have traditionally been at concessional terms. Chinese aid projects, however, are often undertaken with quasi-commercial terms, involving little or no transfer of technology, or skills. It was only when such terms became an unbearable burden in Sri Lanka that the Sirisena government pulled the plug on the China-financed Colombo Port project. The Myanmar Government similarly rejected Chinese projects for cooper mining, a hydro-electric dam and a proposed rail link between Kunming and Kyaukphyu in western Myanmar. Many Chinese aided projects are primarily for the exploitation of raw materials in recipient countries. They are administered by Chinese state-run enterprises like the CNPC or Petro-China, with supplies of equipment and machinery coming from Chinese state-owned enterprises like HUAWEI.

Pakistan will likely find that the construction of the Economic Corridor will involve large elements of Chinese labour, raw materials and machinery. While western China will get access to the oil-rich Persian Gulf through Gwadar, it is still not clear how this corridor, viewed with serious misgivings in the restive Baluchistan province, will catalyse growth across Pakistan.  More importantly, can Pakistan, torn apart by terrorist violence and home to several internationally banned terrorist groups, provide the sort of security the Chinese demand?  Further, Pakistan has been in a state of economic crisis since the 1990s. Its economic fundamentals show no sign of change required for rapid growth, with a declining tax-GDP ratio, which has now fallen to 9.2% and an abysmally low rate of domestic savings. The country now regularly seeks bailouts from the IMF and despite growing remittances from workers, has a precarious balance-of-payment situation.

In these circumstances, Indian diplomacy has to remain focused on the terrorist and other challenges in relations with Pakistan. There has to be a judicious mix of incentives and disincentives to deal with Pakistan-sponsored terrorism. Secondly, we need to build strategies and partnerships to deal with an increasingly assertive China across our Indian Ocean neighbourhood.