Staking it on subsidies

EVEN as US President Donald Trump has slammed India for its ‘high tariffs’, even going to the extent of calling it a ‘tariff king’, the massive American and European farm subsidies that not only distort global trade but also hit millions of farm livelihoods as well as food security of the majority of the world have remained far away from the political glare. 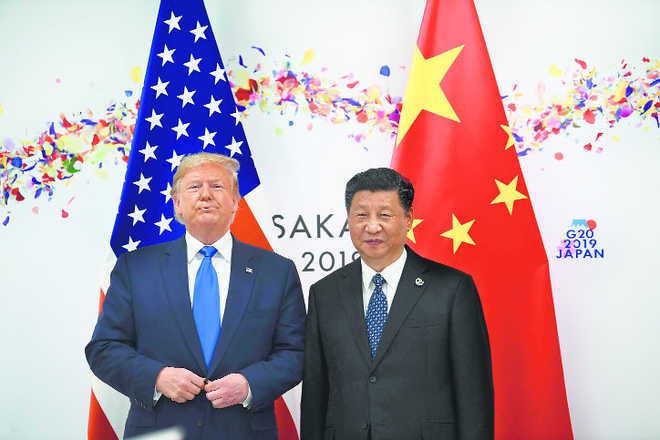 High stakes: Amid a trade war, the US passed the Farm Bill supporting subsidies.

EVEN as US President Donald Trump has slammed India for its ‘high tariffs’, even going to the extent of calling it a ‘tariff king’, the massive American and European farm subsidies that not only distort global trade but also hit millions of farm livelihoods as well as food security of the majority of the world have remained far away from the political glare.

Farm subsidies have been a bone of contention ever since the World Trade Organisation (WTO) came into existence. But the rules of the game for domestic support have been well defined by the rich countries by cleverly packing most agricultural subsidies under what is known in trade parlance as the ‘green box’ .  ‘Green box’ subsidies are considered to be ‘non-trade-distorting’. Nearly 88 per cent of the US farm subsidies and 85 per cent of EU subsidies are bracketed under the ‘green box’ and therefore remain unchallenged. Except for the celebrated case wherein Brazil had taken the US to the dispute panel on cotton subsidies (the US lost), there has not been any serious attempt to open up ‘green box’ subsidies to fresh scrutiny. The US/EU remains stubborn on renegotiating the Agreement on Agriculture, under which subsidy falls.

With the issue of farm subsidies in limbo, and amid the US-China trade war, the US passed the 2018 Farm Bill, making a budgetary provision for $867 billion support in the next 10 years for farm subsidies, Supplementary Nutrition Assistance Programme (earlier called the ‘food stamps’ programme), crop insurance and conservation programmes among other specified categories like international trade, rural development, local food systems etc. About 80 per cent of the support is for the supplementary nutrition programme, which in 2018 had ensured that food be made available to 42 million Americans who couldn’t afford it.

The US Farm Bill is a comprehensive piece of legislation enacted every five years. It was introduced in 1933 in the backdrop of the Great Depression, and is aimed at providing financial support to farmers to stay economically viable. Since 1965, the Farm Bills have been passed with regular frequency, mostly confined to a five-year period. In Europe, the Common Agricultural Policy (CAP) was introduced in 1962 and like in the US, it is aimed at supporting farmers through a mechanism of income support, market measures and rural development initiatives. Admitting that farmers generally get 40 per cent less income than the average household, the CAP programme in 2018 provided 41.74 billion euros for income support.

Broadening the definition of a family farm, the 2018 US Farm Bill included not only children and spouses but also nephews, nieces, cousins and other members of the extended family of a farmer as recipients of agricultural subsidies. All they need to do is to establish their participation in farm management and that can be done even without these members being actually on the farm. Although the stated objective is to attract the younger generation to farming, the move has evoked strong reactions. While India has questioned the rationale behind the new definition, many experts believe that it is designed to help the bigger players stay big.

While high tariffs remain under attack, over the years a complicated and veiled system of subsidies and non-tariff barriers have kept US/EU farmers protected. Writing in Forbes magazine, Adam Andrazewe detailed how since 2008, for over 10 years now, top 10 recipients of US farm subsidies have pocketed an average of $18.2 million, which comes out to be $35,000 a week. There are 6,618 farmers, corporations and agri-business that have made $1 million or more in farm subsidy support since 2008. While the rich have got richer, surprisingly a large number of recipients were people living in the cities. In addition, 12 members of the Congress, too, walked away with $6,37,059 as subsidy in 2017 alone. A subsidy of $1.08 billion in 2017 went to farmers for not producing anything under the Conservation Reserve Programme.

Under the CAP reform in Europe, between 2021 and 2027, farmers will receive a total of 365 billion euros ($438 billion), a reduction in support by 5 per cent, over the current level of funding. In 2016, the EU provided on an average a direct income support of 259 euros per hectare, with a low of 118 euros to a high of 622 euros. Based on the farm structure, nearly 80 per cent of direct income support goes to 20 per cent of the farmers. In addition, there are basic payments targeting specific types of beneficiaries. Another 365 million euros was earmarked for the young entrants in farming, below the age of 40. In India, farmers receive $250 on an average as subsidy, much of it by way of indirect support.

While India’s minuscule farm subsidies are under consistent attack from the US/EU as well as from some other countries, the rich nations are not willing to reduce their farm support. Even when the WTO dispute panel had ruled against the US on cotton subsidies, a case that was filed by Brazil, the US didn’t reduce the subsidy support being given to its farmers. It instead reached an agreement with Brazil to provide a support of $147 million over a period of 10 years to Brazilian cotton growers. Such are the high stakes involved that without reducing its own subsidies, the US (along with EU and others) is building pressure on India to do away with support for public stockholding of foodgrains, primarily targeting the MSP regime for wheat, rice and pulses. The continuing massive support to US cotton farmers depresses global prices as a result of which the Indian cotton farmers are priced out. This is true for other agricultural commodities as well.

With the US-China trade war expected to escalate, time is ripe for India and other emerging economies to shift the focus to the more pressing need to cut back farm subsidy support in the rich countries. As long as these subsidies (both explicit and implicit) remain, there can never be fair and equitable trade.