Stand-alone CDS would be mere eyewash

It was heartening to hear from the Prime Minister during his Independence Day speech that there is a dire need for a joint culture for the armed forces. 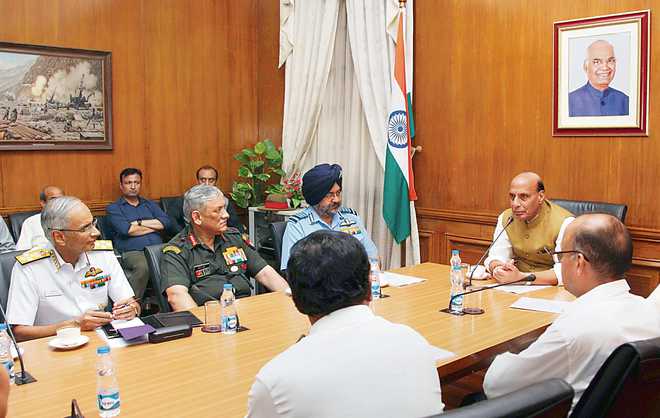 Options: Select a serving chief as the CDS, or pick one from a panel of Cs-in-C.

It was heartening to hear from the Prime Minister during his Independence Day speech that there is a dire need for a joint culture for the armed forces. He announced that a CDS will be appointed soon. The PM’s statement is both timely and appropriate as so far, joint endeavours have remained a cosmetic exercise, despite their virtues. The appointment of just a CDS, without a comprehensive plan of making the armed forces truly joint will be meaningless. Hopefully, such plans exist, but if they are non-existent, immediate action is needed to make them.

The demand for becoming fully joint goes back to our days of Independence when we had set up the first of its kind joint academy, viz NDA, to train the officers of the three services. The demand was repeated a number of times thereafter, specifically after each war. However, it was after the recommendations of the Kargil Review Committee and the Group of Ministers (GoM), headed by the then Deputy Prime Minister, in the NDA-I government in 2001 that it was formally approved.

As the then Vice-Chief of Army Staff, I had dealt with these historic changes in detail and was involved not only in the finalisation of the recommendations of the GoM, but also in detailed working out of structures, organisations, financial powers and systems for implementation, with my counterparts in the Navy, Air Force and others. The need now is to implement the PM’s decision post haste, as many naysayers, both within and outside the services, will still try to abort it with inane and meaningless arguments.

We must visualise the CDS not as just another appointment in the higher defence structure, but as the head of an entire ecosystem, which should be set up simultaneously or soon after appointing a CDS, so that the PM’s directions for joint systems, as a precursor of change, are fully met. The CDS must have maximum powers, including of funds.

Fortunately, we already have an integrated defence headquarters, albeit not fully operational, in the absence of a head. Other actions that should commence simultaneously or earlier are the total integration of the MoD; detailed plans for setting up theatre commands, without which the CDS has little meaning; the reduction of tasking and activities of MoD and service headquarters; and the shifting of more tasks and manpower from the latter to joint entities.

In sum, when the full system is in place, the truncated MoD will be akin to an enlarged secretariat of the Defence Minister; and present service chiefs would look after only manpower, equipment and pre- and post-entry training for all ranks.

Theatre commands are the key to transforming the armed forces as joint forces. We have only one theatre command at present, viz the Andaman & Nicobar Command, and one specified command, viz the Strategic Forces Command. Three other much smaller ones are in various stages of being set up. These are the Cyber, Space and Special Forces (the latter has unfortunately been downgraded to a division, although future wars demand more special forces).

Based on operational considerations, a time-bound plan must be made as to the number of theatre and specified commands the nation needs. Forming them will thereafter be graduated, in accordance with the broad time-frame; infrastructure requirements; availability of funds; manpower and their training and equipping; and many other related issues will need to be considered.

While a CDS is being selected and appointed for providing single-point advice to the Cabinet Committee on Security (CCS), a team under the aegis of the Integrated Defence Headquarters should be appointed simultaneously to prepare a blueprint for manning and functioning of the entire CDS eco-system. This must be implemented ‘at the double’, as we say in the military!

It is only then that synergy amongst the services would be achieved, as was visualised by the GoM and later accepted by the government in mid-2001.

The selection of the first CDS is another important issue. The foremost requirement is professional acumen and reputation as a go-getter whose forte is ‘change’ and not status quo. Already, real and self-appointed analysts are vying with each other to predict as to who will be the first CDS. Unfortunately, they are based less on logic and reasoning and more on gut reactions or ‘langar gups’.

The options of selection are only two. Either select a serving chief and sidestep him as the CDS, or select one from a panel of Cs-in-C. The second option has all the advantages (discussed later). Let the current chiefs superannuate, having honourably commanded and steered their service. There is also the question of precedence/timing. An earlier attempt of 2001, which I was privy to, had to be aborted at the last minute as it would have had serious adverse repercussions on the existing hierarchy of that particular service.

The GoM had stated that the CDS would be a four-star flag officer from either of the three services, who will be ‘primus inter pares’ (first among equals) with the other three chiefs and function as the ‘Principal Military Adviser’ to the Defence Minister/CCS; who will serve till the age of 62 years like the three service chiefs; and who should not revert to his parent service after doing a stint as the CDS.

The above stipulations automatically suggest that the panel must be from the serving Cs-in-C. Some commentators have expressed concerns relating to inter-se seniority, but it is invalid, as all four chiefs would be of four-star rank, and as laid down, the CDS would always be the first among equals.

Considering our immediate adversaries and their present capabilities, the first incumbent could be from either the Army or the Air Force. Both have major roles to play in the western and northern borders. However, two additional aspects also need to be considered. First, the army is deeply involved with counter-insurgency operations in J&K and elsewhere and secondly, hybrid wars are more likely in future. Hence, the first CDS from the Army will be more suitable. I reiterate that I have no intention of downgrading the importance of the Navy or the Air Force, which have extremely important roles to play in the security of the nation. They will, in any case, get their turns subsequently.

By happenstance, the Chiefs of the Army and Air Force would be superannuating shortly, while the Chief of Navy is a recent appointee. Simultaneously, with the selection of the successors to the present COAS and CAS, the selection of the first CDS could also be carried out from within the eligible Cs-in-C of the Army and Air Force. This will result in a smooth succession, and at the same time, a CDS will be appointed without disturbing the hierarchical structure of the armed forces.

The government must translate the vision of the PM into reality and upgrade the decision-making structure of security-related issues of the armed forces. It will also be in the national interest.