Standoff on the border

Tensions between the two Asian giants have sent ripples all over the world. 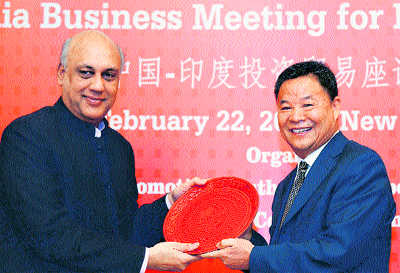 SELF-INTEREST: Economic ties have less to do with public image or slogans and much more with the hard-headed self-interest of both countries.

Tensions between the two Asian giants have sent ripples all over the world. The standoff between India and China at Bhutan’s border has been accompanied by a frenzied global diplomatic campaign by both countries to project their point of view. India’s hard line on the issue of protecting its smaller neighbour has apparently taken the Chinese by surprise, hence the aggressive public posturing.

The question is: will this long-drawn border spat affect the diverse economic relations between the two countries which have become deep and longstanding over the past two decades?

Before answering this question, one must recognise that the scenario is vastly different from the time of the last major India-China border conflict in 1962. At that time, India-China relations were more at a political level with Hindi Chini bhai bhai slogans being exchanged in the backdrop of the Panchsheel Agreement. Economic ties are immeasurably vaster in 2017. And they have less to do with public image or slogans and much more with the hard-headed self-interest of both countries.

At the same time, the wide trade gap ensures that the Indian industry is not likely to be affected greatly by any sudden break in the economic relationship. In fact, the Chinese industry has much more to lose in case of a stoppage of trade flows as India remains a huge market for their manufacturing giants.

The Chinese presence in domestic markets is unmistakably visible even to the ordinary consumer. Shops are flooded with numerous products that were earlier made by small-scale units but are now imported at a much cheaper rate from the northern neighbour. These include decorative lights and electrical fittings, locks and even religious idols. The largest share of the import basket is electronic equipment, including mobile phones and laptops.

The other big buys include machinery, organic chemicals, fertilizers, iron and steel, and plastics. India, on the other hand, supplies mainly raw materials like cotton and copper along with gems and jewellery to the Chinese markets.

The second major issue is investment flows. According to a leading industry chamber, CII, as many as 142 Chinese companies have invested 27 billion dollars over the last 13 years in various industries in this country, including auto components and consumer electronics. These include Huawei, ZTE, Alibaba, and Xiaomi.

Over the same period, 139 Indian companies have invested 12 billion dollars in China, largely in the software and information technology sector. Official data shows much lower investments by China but in any case, there is clearly a surge of interest in the large Indian market. This is visible even to consumers seeking to buy white goods, mobile phones or computers.

In other words, the engagement of the two economies is far greater than ever before in history. Not only that, tourism between the two countries is growing rapidly. A package tour for the average tourists was a rarity about ten years ago. Now it is commonplace for Indians to go on holiday to China and traverse all over the country without any hindrance, barring Tibet, which remains a difficult terrain.

Thirdly, one needs to examine the cooperation between India and China on the international stage in a wide array of multilateral fora. Despite China playing a spoiler in the entry of India in the Nuclear Suppliers Group, it stands alongside India in supporting the Paris Agreement on Climate Change.

In addition, India and China recently circulated a joint paper at the World Trade Organisation emphasising the trade-distorting nature of subsidies by the U.S. and the European Union. It has pointed to the fact that the Asian economies provide little support to their farmers compared to the enormous subsidies given by the developed world. Preparatory meetings are also being held ahead of September’s BRICS summit meeting by the participants — Brazil, Russia, India, China and South Africa —despite the Doklam standoff.

At the same time, it would not be correct to say all is well on global economic issues between the two countries. India just recently rebuffed China's One Belt One Road initiative. The OBOR conference was attended by all other South Asian countries but this country remained steadfastly away due to the China-Pakistan economic corridor passing through Indian territory. The OBOR is a massive infrastructure highway project that aims to follow the ancient Silk Road merchant routes and is China’s pet diplomatic project right now.

At any rate, it is clear that the economic relationship between India and China moves on a separate footing and this will go on uninterrupted to a large extent despite the tensions over strategic border issues. The intertwining of the Indian and Chinese economies is not only complex but looks difficult to unravel at this stage by both countries. Even as there is a ratcheting up of aggressive postures by the Chinese side, Commerce Minister Nirmala Sitharaman goes to Beijing to discuss routine issues like the trade deficit, meetings of the joint economic group, trade disputes between the countries and preparation for the BRICS summit. This is indeed all to the good. Economic self-interest of countries should ultimately be accorded higher priority than skirmishes over distant borders.

Much will depend, however, on whether China wants to resolve the current border stand off by diplomatic means or whether it wants to continue aggravating tensions by going on the offensive publicly.  Fortunately, External Affairs Minister Sushma Swaraj has eschewed any warlike stance and has emphasised the need for a diplomatic resolution to the problem. Hopefully this should ensure that the economic engagement between the two countries is not only uninterrupted but deepens and becomes more meaningful over the coming years.