IN the last week of November, just prior to the release of the sci-fi movie ''2.0'' starring superstars Rajinikanth and Akshay Kumar, a controversy erupted when the Cellular Operators Association of India (COAI) filed a complaint with the CBFC, urging it to withdraw certification. 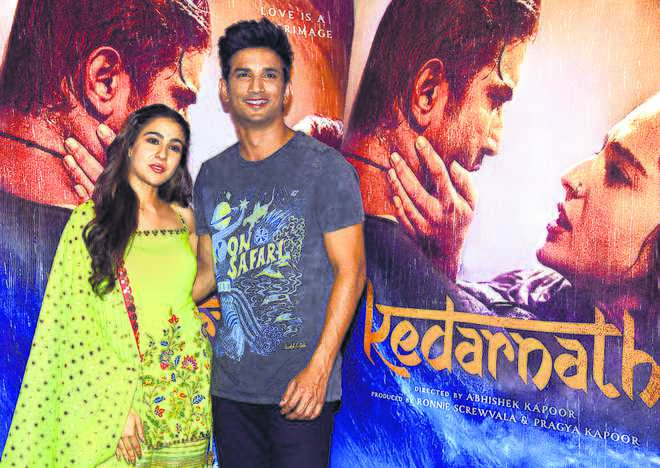 IMMENSE RELIEF: Pleas filed in courts against Kedarnath have been dismissed.

IN the last week of November, just prior to the release of the sci-fi movie '2.0' starring superstars Rajinikanth and Akshay Kumar, a controversy erupted when the Cellular Operators Association of India (COAI) filed a complaint with the CBFC, urging it to withdraw certification. The incredulous grievance made out by the COAI was that the film's plot and theme were "defamatory to COAI and its members, endangered public order, presented anti-scientific attitudes" apparently because the storyline of the movie depicted electromagnetic field emissions from mobile phones and towers as harmful to living creatures and the environment, including birds and human beings.

This, the COAI argued, would create unfounded fear and mass paranoia by spreading misinformation about the adverse impact of mobile towers and phones. While the production house scathingly dismissed the charge, claiming that the film was not against cellular phones, but against unregulated growth of mobile services, the CBFC mercifully took little notice of the complaint and the COAI too did not pursue the matter legally. However, what is truly laughable is the utter inanity of the COAI objection against the movie — a piece of fiction.

It is two weeks since the release of 2.0 and nowhere does one find moviegoers demanding dismantling of mobile towers or a spontaneous outburst of mass protests against purportedly hazardous radiation from cell-phone services as depicted in the film. Then what was the fuss all about?

If the COAI was a fringe outfit, one could have understood absurd objections against a film and its inability to distinguish between entertainment-oriented fiction/creative liberty and reality, but when an apex corporate body of a state-of-the-art industry does it, it makes one seriously wonder whether everyone in India has lost their marbles.

What else explains the rash of frivolous protests and legal challenges raised by some busybody or the other against more and more films in the last few years?

For instance, just as the 2.0 controversy fizzled out, news came of pleas being filed against the film 'Kedarnath', starring Sushant Singh Rajput and Sara Ali Khan, a day prior to its release on December 7. While two lawyers objected to the release of the film in the Bombay High Court, the president of an obscure outfit called the International Hindu Sena moved the Gujarat High Court. The specious ground on which both legal cases were filed is that since Kedarnath shows a love story between a Muslim boy and a Hindu girl, it promotes 'love jihad' and will create a drastic situation. Further, the pleas contend that the shooting of a love scene between the boy and the girl at the holy pilgrimage site apparently hurt the religious sentiments of the petitioners and the Hindus in general.

That these pleas have been dismissed instantaneously by the respective high courts is a matter of immense relief, but the moot question is how in the world has an environment been created where such bogus objections can be raised against a movie in the first place.

A waste of time

Are any of these arguments against 'Kedarnath' sensible, leave alone legal? Is there any ounce of logic to the contention that a drastic situation will be created, given the fact that the designated government body, the CBFC, has duly viewed and certified the film for public viewing? Then why are such pleas even allowed to be filed and entertained expeditiously? Isn't it a complete waste of the court's time and hence public time, especially when far older and more serious legal cases are clogging our judicial system? Then why should such frivolous pleas be permitted to jump the queue, just because they are disguised as public interest litigations (PILs)?

The problem with forums like courts, CBFC and media entertaining such patently ridiculous objections is that it confers nuisance value and legitimacy on completely undeserving individuals and outfits that pursue daft agendas.

While 'Kedarnath' has been lucky, the film 'Manmarziyaan' featuring Abhishek Bachchan and Taapsee Pannu, released in September, wasn't so fortunate. The objection raised against this film was that there were three shots which hurt the sentiments of the Sikh community, because the lead pair (both Sikhs) are shown smoking in two of the scenes, while in the third, Taapsee Pannu is shown thinking of her former lover, Vicky Kaushal, even as she enters a gurdwara to get married to Abhishek Bachchan. It boggles the mind to know that someone actually believes that these rather innocuous shots of fictional characters smoking cigarettes casually and thinking of ex-lovers while getting married would have so scandalised the whole Sikh community's faith that they needed to be snipped off. What's even more unbelievable is that the filmmakers complied with these wishes because the Sikh organisation concerned filed a petition in the Jammu and Kashmir High Court, seeking deletion of the scenes. Can it get any more ludicrous than that? What next?

More importantly, is this how it's going to continue? Ridiculous objections blown up into controversies by some touchy soul, accustomed to taking offence about any minor infraction in a film? When there is a time-tested system in place in the form of the CBFC to certify films, why should some individuals and outfits have the power to hold to ransom the release of duly certified films for frivolous reasons?

The Gujarat High Court levied a penalty of Rs 5,000 on the petitioner who filed the PIL against 'Kedarnath', observing that he did it only for publicity reasons. While that is welcome, perhaps, it's time to charge much higher penalties to dissuade people from filing cases without substance. Finally, shouldn't the judiciary also need to answer why it feels compelled to give precedence and urgent hearings to such matters at all, when far more critical issues await adjudication every day?