This does not qualify as “breaking news”, but no one should be surprised if three months down the line during the West Bengal and Assam assembly election campaigns, some senior BJP functionary — say, Hon''ble Amit Shah-— were to puff up his chest and claim “victory” at Pathankot: “We killed six for six. This does not qualify as “breaking news”, but no one should be surprised if three months down the line during the West Bengal and Assam assembly election campaigns, some senior BJP functionary — say, Hon'ble Amit Shah-— were to puff up his chest and claim “victory” at Pathankot: “We killed six for six. In Mumbai, during the UPA days, six of them killed 200 of ours.” Even if a claim of this kind is not made in public, this guff has already become the accepted in-house wisdom. Indeed such self-serving delusions constitute the very core of the deshbhakti school of strategic machoism.

For over two decades now, perhaps dating back to the days of the Babri Masjid desecration, a sizeable section of our political leadership has misled and deluded the nation with its claims of being better at dealing with Pakistan. The argument is simple and has meretricious appeal: only a 24-carat deshbhakt can summon the courage and the will to take Pakistan on. In the 1990s, this was LK Advani's leitmotif. His most potent promise was that should a government of deshbhakts come to power, it would have the guts to publish a “White Paper” on the ISI. The country was invited to believe that all that was required to roll back Pakistan’s mischief-making was for a joint secretary in the Home Ministry to compile a “dossier.” Advani and company accused the Congress and, later, the United Front governments of being weak and pusillanimous. The subtext of the accusation was that because of their “vote-bank politics”, the Congress and the other pseudo-secular parties would not act decisively and aggressively against Pakistan. This argument, of course, was blatantly designed to cater to the Hindu vote bank, yet dressed up as a call to our patriotic allegiances and emotions.

As Home Minister in the Vajpayee government for six years, Advani failed to produce the much-dreaded “White Paper” on the ISI. Instead, on these self-advertised deshbakhts' watch, Pakistan's perfidy continued unabated. There was, first, a Kargil; then, a Kandahar and, then again, we had the attack on our Parliament House. Despite all these acts of Pakistani misbehaviour, Prime Minister Vajpayee ended up travelling to Islamabad to sign a joint statement with General Pervez Musharraf. The deshbhakts patted themselves, first on their “coercive diplomacy” after promising an “aar-paar ki ladai” and then on their “statesmanship” in putting, once again, faith in Pakistan's profession of good intent.

During the UPA days, the deshbhakt aria was resumed full-throatily, with Narendra Modi playing the lead tenor. In the course of the 2014 Lok Sabha election campaign, Modi further finessed the deshbhakti song, even disclosed his chest measurements, promising that his very accession to the Delhi gaddi would send shivers down Pakistan's terror spine.

Admittedly, these claims were nothing more than a demagogue’s essential tools of half-truths and half-lies. People, in fact, were not fooled. Let it be recalled, the country had voted out “the tried and tested” Vajpayee in 2004 and, again, did not buy the deshbhakts' argument of a “weak Manmohan Singh” in 2009 when we were given a clear-cut choice between a “strong” and a devout “deshbhakt” (LK Advani) and a “weak and puppet” (Manmohan Singh). The country opted for Manmohan Singh, notwithstanding the 26/11 terror attack in Mumbai. But the deshbhakts' chorus continued.

Worse, a section of our strategic community has fallen for the demagogues' mumbo-jumbo. In August 2013, let it be recalled, a group of 40-odd security experts, led by venerable Ajit Doval, joyfully took the deshbhakts' humbug to the bank. These experienced men who were very familiar with our frailties and fault lines demanded a change in the “cost-benefit calculus” and called for new policies “that will impose a cost on Pakistan.” Many of them supplied their own narratives, arguments and anecdotes to prop up the demagogues' bogus pitch. The danger is that this false note has got metamorphosed into embedded wisdom. Pathankot has put paid to this conceit.

The assumption in the deshbhakts' argument is that we have all institutional prowesses — assets, resources, technology, imagination, tactical brilliance, strategic prescience — to switch over to a new “cost-benefit calculus.” We can spank the “Pakis” at a time and place of our choosing, only if these political weaklings would not hold us back.

This claptrap has had the most deleterious effect on our collective response to terror. It is time we recognise that our security forces and agencies have understood the deshbakhts’ game and have manipulated the politicians' self-inflicted vulnerabilities. Those who are charged with protecting us are content to go along with the politician as he reshuffles his deck of deshbhakti cards.

Trapped in his own catechism, the politician is not able to ask tough questions of our armed forces. We happily buy into the American narrative that Pakistan is a “failed state” and that it cannot control its “rogue” elements. We sing the song of ISI perfidy loudly and tunelessly. But no “seasoned” diplomat, no “veteran” strategic thinker, no be-medalled general, no celebrated “operational man” dare ask as to why the Indian defence establishment has not been able to replicate the ISI kind of tenacity of purpose, the same clear-headedness of goals and objectives. The “weak” politician is the handy fall guy.

That leaves our generals and admirals free to quibble over dates of birth, squabble about promotions and postings and intrigue about post-retirement diplomatic assignments. They indulge in these distracting and destructive manoeuvres because each one of them knows no political leader has the moral authority to make exacting demands on them. Trapped as he is in the deshbhakt's spider web, Narendra Modi's first reaction to Pathankot was to pay a demonstrative obeisance to the martyred soldiers.

Even worse, we have now corrupted and corroded the competence and integrity of a whole generation of security community and defence leadership, which in turn has enlisted the media as an institutional accomplice. If the ISI proves its mettle by training and motivating non-state actors, our security establishment earns its spurs by enlisting and misguiding the media into manufacturing a convenient narrative.

On Saturday morning (January 2) itself, a section of the embedded media was singing hosannas to “clinical precision” with which the NSA had single-handedly marshalled the security forces and how “all” the four terrorists had been “neutralised.” The innocent man that he is, Home Minister Rajnath Singh had even tweeted a satisfactory denouement in the Pakthankot standoff. All the ducks were in a row. What more could be asked of a deshbhakts’ regime?

Unfortunately, Parliament would never get to discuss how six of them could enter the Pathankot Air Force base. Nor would coalition compulsions permit the deshbakhts to ask searching questions of the Punjab Police as to how some of its men might be the fifth column to the terrorists.

The deshbhakts' trap springs, again and again. Within hours of a terror incident, “sources” confirm the hand of this or that outfit. Such precise information is meant to reassure the scared citizen that our security agencies are professionally competent and are hard at work. Not only do these leaks become the deshbhakts' catnip, these “revelations” also get cast in stone, become the basis for “actionable intelligence” which are then demarched to Pakistan. Anyone questioning the silliness of the whole charade is dismissed as lacking in patriotism and worse, lacking in respect for the “martyred” soldiers.

It is a delicious irony that even the clever Pakistani abets our deshbhakts' conceit: “Only a BJP leader can be strong enough to solve the Kashmir issue.” And, we remain trapped in our own web — and wait for the next assembly election or terror attack, whichever comes first. 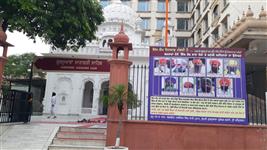