HAS India reached the tipping out? Quite apart from the legal ramifications of the arrest of the Jawaharlal Nehru University (JNU) students’ union president, Kanhaiya Kumar, charging him with treason, the Bharatiya Janata Party government has declared war on Nehru’s India flying the flag of Hindu nationalism. 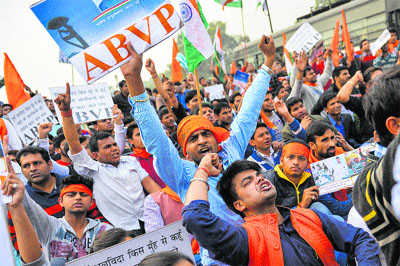 The new brand of nationalism is anything but that.

HAS India reached the tipping out? Quite apart from the legal ramifications of the arrest of the Jawaharlal Nehru University (JNU) students’ union president, Kanhaiya Kumar, charging him with treason, the Bharatiya Janata Party government has declared war on Nehru’s India flying the flag of Hindu nationalism. It is a concept we are familiar with over the decades, in fact since 1928 with the founding of the Rashtriya Swayamsevak Sangh (RSS).

The significance of recent events in the JNU is that the broader Sangh Parivar has made a decision at the highest level that now is the time to strike at the very concept on which the country has lived and flourished since Independence for the narrower idea of a Hindu India in which religion wrapped around the national Tricolour plays a leading role and opposition to the ruling party can be dismissed as anti-national. It is no secret that JNU is the bête noir of the Parivar and the maximalist demand for its closure has already been voiced by Rajya Sabha MP Chandan Mitra and editor of The Pioneer.

We know where Adolf Hitler led Germany, Europe and the world to, but it is too early to tell where the Parivar’s audacious attempt to suppress dissent and damn an institution of higher learning of merit will take India. What is beyond doubt is the beating of the nationalist drum to drown out dissenting voices. The partisan lawyers’ conduct on the premises of a Delhi court was a taste of the medicine sought to be administered to dissenters. It was followed up the next day by sending muscle men to counter student and faculty demonstrations at JNU.

Thus far, the Parivar is experimenting with its staple form of intimidation, with a benign administration and police force looking on. But there will doubtless be refinements in the process with more experience. After all, in recent times it began with bullying girls in a Bangalore pub and such petty acts to graduate to the building of a Hindu society of the concept of the Parivar.

The Parivar has defined India as a Hindu country, whatever the faith its inhabitants practise. And Prime Minister Narendra Modi and many of his Cabinet ministers are loyal Parivar men and women often bred in the RSS melange of myths and Spartan beliefs. The dilemma is that given the diversity of  faiths, ethnicity and orientation of the country, where will a monochromic version of India take the country? Will it lead to the Parivar’s version of salvation?

These are questions for the future. The courts will have their rightful say, but the treatment of JNU is warning enough for the majority of people who do not subscribe to the BJP’s version of Ram Rajya to come together to frame a counter strategy in a fraught political environment.

For the obstacles to countering the well-oiled machinery of the BJP and the Parivar are many. For one thing, we must live with our recent political past, the fact that the second term of the Congress-led coalition was lack lustre and ineffective with its peculiar system of dual authority. On the other hand, Mr Modi as the leader of a majority BJP government after more than three decades, has been willing to take decisions, was a refreshing change.

Mr Modi is a consummate politician and, apart from de-emphasising his ideological character, pressed the development button even while appropriating sanitised versions of national, mostly Congress, icons to his cause. There is Mahatma Gandhi taken over for the sanitation cause and Sardar Vallabhbhai Patel for his connotation of a strong leader. Jawaharlal Nehru, the maker of modern democratic India, has been left severely alone, with even the institution named after him now under frontal attack.

Mr Modi has had to make compromises with his mentor, the RSS, although it is unclear whether some of the doubtful decisions he has taken are out of his own volition or a capitulation. For instance, by appointing the persons he did in the key ministries of human resources development and culture, he has surrendered his prime ministerial prerogative to the tender mercies of the RSS chief Ram Madhav.

For the BJP, JNU is a test case in what can be described as the saffronisation of India. After all, it has the ingredients of all that the Parivar detests: secular character, high academic standing, largely Left in inclination among most students and faculty. As far as institutional autonomy is concerned, the BJP has contempt for the mere idea.

As far as the BJP leadership is concerned, it probably believes that it can ride out the storm its actions over JNU has caused, with many other notable universities around the country coming together to protest against the government’s move to arrest the students’ union leader while slapping the sedition charge against him. That it was followed by the lawyers’ hooliganism inside the precincts of the Delhi court made matters worse.

In a way, the present crisis is a test of the strength of India’s democratic political system and the resilience of opposition parties to find a balance between effective opposition to the Modi government’s arbitrary acts and letting the system of parliamentary function for the good of the country. The surprise is that the Prime Minister calls a meeting of all parties to seek the Opposition’s support for essential support for the legislature’s smooth functioning and challenges it shortly before the Budget session by insulting it with arresting a student leader and slapping a sedition charge on him.

We have had a foretaste of Mr Modi’s political methods by his insisting on being the main campaigner for his party in state Assembly elections while expecting Opposition help in passing legislation in Parliament. The Bihar election reverse has not dissuaded him from going to Assam on the eve of elections to hammer the Opposition, particularly the Congress.

It will not be easy to shut down JNU or reorient it to the Parivar’s ideological hues.

The Bengaluru-Male plane was carrying 92 passengers