EVEN as France grieves over the killings and mayhem wrought by terrorists on innocent civilians going about their business and enjoying simple pleasures in Paris on a Friday night, the world sits up and takes notice. 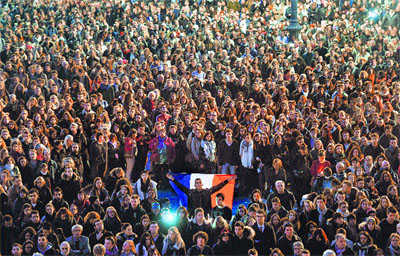 The chilling Paris attacks have, for now, united the world.

EVEN as France grieves over the killings and mayhem wrought by terrorists on innocent civilians going about their business and enjoying simple pleasures in Paris on a Friday night, the world sits up and takes notice. It is not only the scale of the killings that shock but the evil geniuses that shape their followers’ minds through modern technology to revert to a medieval system of life clothed in the garb of religion. They are clubbed together under the name of the Islamic State (IS) or its variants ISIS and ISIL or Daish in Arabic.

French President Francois Hollande’s reaction was understandably pitched at a high decibel level. He said his country was at war with the terrorists, reminiscent of US President George W Bush’s rhetoric on the 9/11 attacks in America, and immediately ordered intensive bombing of IS establishments in Syria.

In parallel, Russian President Vladimir Putin, having come to the conclusion that a Russian passenger jet flying over Sinai peninsula was felled by a terrorist bomb, killing all occupants, intensified his country’s warplanes’ attacks on IS targets, saying his forces would cooperate with France in the fight against the IS.

However, these are essentially opening shots in a long game of geopolitics and strategy. The world’s most powerful nations and regional powers are groping for answers that have eluded them, despite the recent confabulation at the G-20 gathering in Turkey. The truth is that in modern historical terms, the IS, straddling across two countries, is a new phenomenon ruling over a defined geographical area, putting into practice its medieval ideas of justice and punishment while using its army of indoctrinated supporters to cause deaths and mayhem in foreign lands to make its point.

The Middle East is a rich area for the IS to fish in because outside powers and regional heay weights have been playing their own games, one for strategic reasons and the other for spreading its brand of Islam as something of a missionary endeavour. Going no further back than the American invasion of Iraq on specious grounds, the chain reaction is continuing to reverberate. In parallel, the arrogance of the Bashar al-Assad regime in Damascus lay in converting a legitimate civilian protest into a revolutionary uprising.

On the Shia side in the Shia-Sunni divide in the Muslim world, Iran has been active, together with Russia, in propping up the Assad regime that owes allegiance to a Shia sect, the Alawites, in a Sunni-majority country. And Iran welcomed the rule of the majority Shias in Iraq, thanks to the American invasion defeating the Sunni dispensation led by Saddam Hussein. Besides, Iran is the overlord of the Shia Hezbollah movement in Lebanon and taps it liberally to provide foot soldiers.

No one among the major world powers is talking about the central problem staring them in the face. While air power can degrade and demolish IS assets, there can be no victory without fighting men on the ground. Piecemeal victories won so far are thanks to the Kurds and tribal leaders or Hezbollah and Iranian fighters because neither the US nor the regional powers apart from Iran want to see their men doing the fighting. American inhibitions are understandable — in fact, Barack Obama was elected on ending two wars — but while rich Arab nations are willing to open their purse strings, they are averse to sending their men into battle, except in the limited sphere of rescuing a neighbouring country like Yemen.

Saudi Arabia, in particular, has much to answer for because its massively-funded effort to proselytise the Middle East, Asia and Africa is in part responsible for the Islam favoured by its clergy and now espoused in an extreme version by proponents of the self-proclaimed caliphate. Riyadh has its own internal compulsions to face and weaning away from a long-established policy will take time.

In the short term, the US and its western and other partners have to reconcile the Turkish rulers’ aversion to its Kurds and their cousins, the Syrian Kurds. They have proved the toughest fighters and the latter are being militarily helped with US arms. Their Turkish brothers, the PKK, are classed as terrorists and earlier efforts to seek a rapprochement by President Recep Tayyip Erdogan were given up months ago to polarise voters, with the ruling AK Party successfully winning back a majority in Parliament.

Against this backdrop, the Islamic State leadership will continue to play hide and seek with the intensified air warfare, with the Kurdish factor in the Sunni-Shia schism working to hinder the full use of committed Syrian and Turkish fighters helping the Western alliance in the contest. Second, there is the existential problem of an army of European citizens of Muslim and Middle East origin having been successfully indoctrinated by the IS’s sophisticated propaganda to return home and perpetrate atrocities. Many of the progeny of the original arrivals in Europe live on the margins of society.

Indeed, it is ironical that the blessings of modern technology that have demolished space and distance have been applied with chilling effect to mould impressionable minds of men and women who live frustrating lives in the poorer sections of Europe’s towns and cities.

How then should the world protect itself from the evils of the IS? Thanks to the nature of the Paris attacks and Russia’s own loss at the hands of terrorists — the plane downing has been claimed by the IS — the prospect is of greater cooperation between the West and Moscow, with Ukraine differences put to one side. As it happens, the IS now represents a common threat to both sides of the Shia-Sunni divide, with the Saudis learning the hard lesson that their missionary funding of another kind of religious inflexibility can metamorphose into IS ideology.

There is a long way to go but recognition of the common threat is an essential first element in understanding the dimensions of the problem. And the flood of Syrian and other refugees knocking at Europe’s door are a reminder of another tragedy.