The challenge of being Rahul Gandhi : The Tribune India

The challenge of being Rahul Gandhi

THE Congress has elevated Rahul Gandhi as its President. With a new President, the Congress will need to re-consecrate its claim to lead the opposition camp. Veteran Sharad Pawar has already tried. 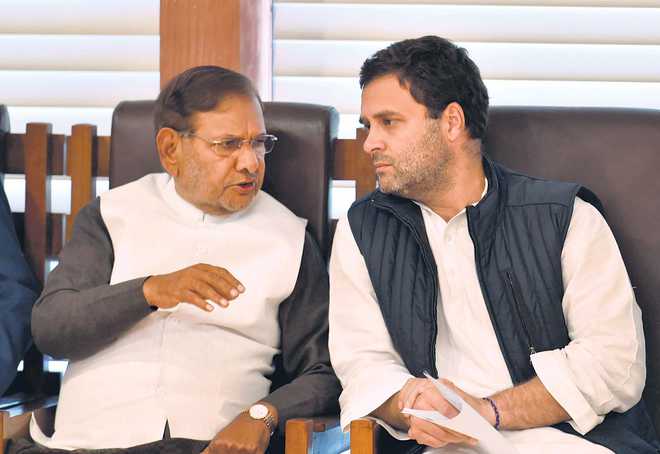 THE Congress has elevated Rahul Gandhi as its President. With a new President, the Congress will need to re-consecrate its claim to lead the opposition camp. Veteran Sharad Pawar has already tried.

In quick succession, Pawar organised two meetings of political leaders, first in Mumbai and then again in Delhi when the Budget session began. While the Congress was part of both these deliberations, its discomfort in allowing other parties to taking such an initiative was all too palpable. Soon after, Sonia Gandhi felt constrained to organise a meeting of like-minded parties.

Every political party is getting ready for the battle at the hustings, amid reports that the BJP under PM Narendra Modi could spring a surprise by frontloading the Lok Sabha elections, possibly with the polls to the state assemblies of Chhattisgarh, Madhya Pradesh, and Rajasthan due this November.

Consequently, those opposed to the BJP have begun looking at the alternatives and usefulness of coming together. The opposition is acutely aware that under the Modi-Shah duo, the BJP remains a formidable contender to retain power at the Centre.

The Congress and others may mock at repeated assertions by the BJP of retaining power in 2019; but there is no getting away from the fact that it will be the BJP versus others, duel.

Can the opposition work together as it did in the past? There is no clarity as yet. At the meetings organised by Pawar and Sonia Gandhi, the Bahujan Samaj Party failed to turn up. Still

circumspect, the Trinamool Congress has kept its communication channels open but Mamata Banerjee prefers to depute her colleagues instead of attending the conclaves.

Among the left parties, the CPI (M) is internally divided. So far, the Prakash Karat-led faction has prevailed but he could find himself on a weak wicket if his Ekla Chalo line comes unstuck in Tripura. The CPI, however, is clear about the requirement for a broad front of secular, democratic and left forces with ample space for the Congress.

Across the Vindhyas, it is a mixed bag for the Congress. Its ties with DMK in Tamil Nadu remain friendly, at least till the patriarch M Karunanidhi is around. The AIADMK, on the other hand, is still struggling to overcome internal flux after the death of party supremo J Jayalalithaa. Then there are the wild cards in superstars Rajnikant and Kamal Haasan.

Clarity also eludes a combined opposition line up in several other states as well. In Karnataka and Telengana, the signals are not too encouraging: H D Deve Gowda has declared he will not align with the Congress; in Telengana, ties with the breakaway YSR Congress remain in deep freeze.

The BJP too is not in a very happy situation with its allies. The Shiromani Akali Dal in Punjab is in a sulk while the Indian National Lok Dal remains estranged in Haryana. The Telugu Desam Party in Andhra Pradesh is not averse to a breakup with the BJP while the Shiv Sena is determined to go it alone in Maharashtra.

Yet Rahul Gandhi bears the tougher obligation of bringing around disparate allies into a common front at a time when he is making the transition as the Congress chief. The silver lining for the Congress is a definite change in his approach as per the demands of the new role.

The window for the general elections is rapidly closing but the new Congress president is yet to inform about a grand strategy to take on the BJP or, at least, indicate that he is working on such a plan. The task is urgent.

The BJP has now emerged as the single-largest party in the Rajya Sabha and hopes to get the majority status in a few weeks which will give it a greater say over steering legislative proceedings in Parliament.

Rahul Gandhi has not only to be seen as the principal opposition figure leading the charge in Parliament where the numbers are adversely stacking up. His biggest challenge is to bring around opposition parties reluctant to be seen in the Congress camp in order to infuse greater credibility and effectiveness in its endeavour to oppose, expose and, possibly depose the BJP.