The crowd-puller who pulls no punches

A disturbing reality of the Modi era is that the media, Opposition parties, institutions and citizens seem to have forgotten the art of holding an elected government and party accountable for its many failures. 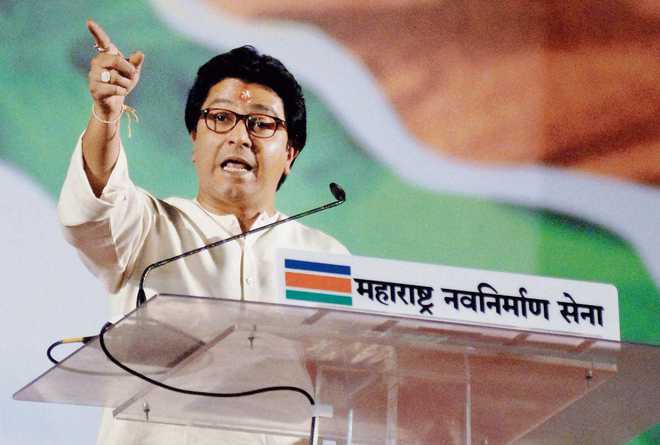 Tirade: The stunning impact of Raj Thackeray’s aggressively articulate campaign against PM Modi and BJP chief Amit Shah has taken everybody by surprise.

A disturbing reality of the Modi era is that the media, Opposition parties, institutions and citizens seem to have forgotten the art of holding an elected government and party accountable for its many failures. A combination of factors is responsible for this. Firstly, the most charitable description of much of the media today, especially TV news channels, is that it is ‘pliable’. It is often said that during the Emergency, the mainstream press crawled, when it was merely asked to bend. Today, it has gone one step further. Asked to crawl, the media has largely chosen not just to grovel but also to fawn over the PM.

The Opposition is thoroughly discredited, with the only national party, the Congress, lagging in cadre, leadership, public perception and significantly lacking an effective communicator who has the charisma, oratory or the ability to expose the perfidies, jumlas and under-achievements of the Modi government.

Independent constitutional institutions such as the EC, RBI, CBI, CAG and the higher judiciary, too, haven’t covered themselves with glory. Most have shown themselves incapable of real courage of conviction when direly needed and have generally preferred to play safe, except for a gentle rap on the government occasionally, to salve their consciences.

Individual citizens or civil society have been systematically intimidated and hounded as liberals, anti-nationals, sickulars, urban Naxals and so on and have only made matters worse by using tired, clichéd arguments that resonate with no one, making them sound like pretentious gasbags.

This neutralising of the media, Opposition, institutions and individuals, together with the 24x7 hype and image-building around the PM, has enabled the government to escape hard scrutiny, getting away with fudged data, fantastically tall claims, fake promises and utter falsehoods.

And that is precisely why the stunning impact of Raj Thackeray’s aggressively articulate campaign against PM Modi and BJP chief Amit Shah has taken everybody by surprise. The Maharashtra Navnirman Sena (MNS) chief has never been accused of being a liberal. If anything, he fits perfectly into the right-wing camp with his anti-migrant, pro-Marathi, pro-Hindu, chauvinist stance since he founded the party in 2006, after breaking away from the Shiv Sena.

Yet, he has managed to launch one of the fiercest and credible-sounding attacks on the many failures and deceptions of the Modi-Shah combine this election season. Raj Thackeray’s speeches, laced with barbs targeting the BJP’s big two, have received an unexpectedly enthusiastic response from the crowds that gathered to hear him during his 10 rallies in Maharashtra — in Mumbai, Nashik, Panvel and other places.

The most novel part of his campaign is that he has intelligently deployed the stinging template of displaying factoids, videos, newspaper clippings and other documents on giant video screens, to expose what he calls the lies and chicanery of the PM and the BJP president over the past five years. During a rally, Raj Thackeray played a clip of the PM claiming that his government had built 8.5 lakh toilets in a week. Turning to the crowd, he then tore into the claim by pointing out in his earthy brand of sarcasm that this would have meant building seven toilets every five seconds, which was impossible. Similarly, he showed a video of the PM’s hometown of Vadnagar, in which several residents complained of lack of basic facilities; he went on to ask the crowd how they could trust a man who hadn’t done anything for his hometown. Elsewhere, he produced on stage a family, whose photos had been used without their consent in one of BJP’s poverty alleviation advertisements.

He has also convincingly lampooned Modi and Shah on demonetisation, black money, unemployment, Aadhaar,  data fudges, laying bare the contradictions in their claims and statements by juxtaposing them with actual facts, figures and visuals unearthed by his research team. His punchline, ‘Lav re to video’ (play that video), has been trending and at his rallies it sends the crowds into raptures of anticipation of watching another fictitious claim by Modi busted through Raj Thackeray’s instant reality check. So, why is the Raj Thackeray template of criticism working, where everyone else has failed? The answer might lie in the following reasons:

n Thackeray clearly targets only Modi and Shah (not BJP), who are not trustworthy and, hence, dangerous for India. His message is unambiguous — don’t vote for the duo.

n Thackeray does no waffling or pussy-footing and doesn’t shy away from harsh, direct, unapologetic criticism, made in his trademark style that carries complete conviction with his audience.

n The facts, figures, videos, newspaper clippings that he shows at his rallies provide authenticity and substance to his trenchant oratory and raise his speeches above mere bombast. He’s got the mix of logic and rhetoric just right.

n Ironically, it is Thackeray’s persona as a right-winger, whose politics is not very different from that of the BJP’s ally, Shiv Sena, that provides his critique of Modi-Shah immense credibility. It is also this image that enables him to raise suspicion about Pulwama and Balakot incidents and ask questions which Opposition parties simply cannot risk, without being dubbed anti-national.

n His status as a vocal Modi supporter in 2014, now turned critic, also gives heft to his words. It also enables him to position himself as a conscientious objector with no skin-in-the-game, because his party is not contesting the polls. He dismisses allegations of being a Congress-NCP stooge but admits he doesn’t mind if his rallies benefit them.

While Raj Thackeray’s politics is questionable, he’s certainly demonstrated that credible criticism can penetrate Modi’s popularity if presented smartly before the electorate.