The fine print of Hindu Rashtra

ON May 23, we will know if Narendra Modi will get another term at the helm. 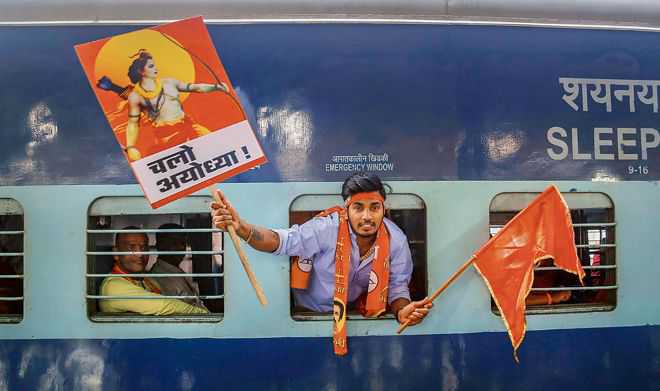 Upheaval: Hindu Rashtra will most certainly lead to realignment of the social and cultural framework of our society.

ON May 23, we will know if Narendra Modi will get another term at the helm. Pollsters, media and even the anti-Modi brigade believe that the NDA might form the next government, but the BJP would be weakened sufficiently to stop pushing Hindutva and hallucinating about a Hindu Rashtra, which is the ultimate objective of the Sangh Parivar. However, what if the BJP sweeps the polls? What will stop the party then from pursuing its Hindu Rashtra agenda? So, perhaps it might be a good time to speculate on what a Hindu Rashtra could mean in practice.

(1) Type of State: It’s expected that Hindu Rashtra will declare Hinduism as our state religion, ending secularism. But what if it proposes to turn India into a theocratic state by jettisoning the Constitution completely or reframing it to be compatible with Hindu religious tenets? After all, BJP MP Anantkumar Hegde allegedly threatened to do so and also asserted that Manusmriti is the first Constitution. It’s quite possible therefore that the scriptural bedrock of Hindu Rashtra’s theocratic constitution could be Manusmriti, Vedas, Bhagavad Gita, Arthashastra or more recent doctrinal Hindutva works by RSS leaders like Bunch of Thoughts, We and our Nationhood Defined or Integral Humanism.

(2) Governance, law and justice:  BJP MP Sakshi Maharaj reportedly declared that there would be no elections after Modi wins in 2019. Last year, Amit Shah had claimed that the BJP would rule India for 50 years. So, does Hindu Rashtra plan to do away with parliamentary democracy and assign governance permanently to the Sangh clan? In that scenario, perhaps the immediate succession plan after Modi could be Shah followed by Yogi Adityanath. More importantly, one wonders if there is going to be a complete overhaul of administration, law and justice and what the template would be.

(3) Education and knowledge: Given the aggressive re-writing of school textbooks and history by BJP governments and the constant, uncritical invocation of ancient Indian knowledge, it’s not unlikely that today’s science and technology curricula might be replaced or complemented by syllabi like Aryabhatiya, Pancha Siddhanta, Sushrut Samhita, Shilpa Shastras etc. Perhaps the guru-shishya system of education might make a comeback in place of modern pedagogy. English could be replaced by Sanskrit as the medium of higher education. However, where are we going to get qualified faculty, textbooks and other academic material to make such an educational system sustainable? Also, practically applying this ancient knowledge to the modern world we live in might be incredibly tough.

(4) Cultural and social construct: Hindu Rashtra will most certainly lead to realignment of the social and cultural framework of our society. That might involve either bringing back the varnas in a refined, euphemistic form or abolishing all caste, creed, class, linguistic and religious differences to create a homogenous Hindu society — one nation, one people, one language. The imposition of Hindi on everyone cannot be ruled out and attempts might also be made to purge the influence of western and alien cultures from national life. Then there are questions like what happens to all the diversity we cherish as a nation; whether women will have to return to traditional roles as home-makers only, given the patriarchal pre-disposition of Hindutva proponents? Also, would each family be expected to keep a cow and join the RSS?

(5) Minority question: How Hindu Rashtra deals with minorities is an issue that evokes unease. It could mean just legislating a Uniform Civil Code. However, there are apprehensions that minorities, especially Muslims, could be downgraded into second-class citizens or they might be offered a grand ghar wapsi through conversion to Hinduism. But if they choose not to convert, is India going to deport them to Pakistan or any other country willing to take them? And if they cannot be deported, will they be condemned to ghettos? What about non-religious minorities like LGBT, transgenders, dissenters, intellectuals, atheists, rationalists etc?

(6) Food, clothing, entertainment: Some predictions of Hindu Rashtra’s policy on fun and personal choices can also be made. A country-wide beef ban looks inevitable, but other kinds of meat and even eggs could be prohibited too, turning us into a vegetarian country. Chances are clothing and entertainment might be made sanskari. Traditional dresses could be mandated at all times and western wear and entertainment might be severely restricted. However, since gambling and drinking are not taboo in Hindu mythology nor are erotica and sexual pleasures, going by the Kamasutra, will Hindu Rashtra take a contradictory position or permit such frolicking?

(7) Literature, cinema, arts and media: It’s doubtful that Hindu Rashtra will offer complete freedom of expression. Literature, cinema, arts and media might have to strictly adhere to sanskari and nationalistic guidelines. Harsh media criticism of the government could be considered treason; writers and artistes may well face imprisonment, exile or execution if they offend. It’s possible that western creative works might be considered contamination and corruption of the Hindu ethos.

(8) Policy on Pakistan and other enemies of the State: The big challenge for Hindu Rashtra in walking the talk lies in tackling Pakistan, terrorism, Naxalism. After the post-Balakot rhetoric and bravado, there is a real danger that any flashpoint can escalate into war, to appease heightened nationalistic hubris. Also, who knows, some sections of the Sangh might want to realise their long-held fantasy of Akhand Bharat. But will Hindu Rashtra also use a muscular policy to settle our border disputes with China too?

(9) Father of the Nation: If the unthinkable happens, will Gandhi be replaced by Hedgewar, Golwalkar, Patel, Bose, Modi or Godse, who has been declared a deshbhakt by Pragya Thakur?

Most of these are suppositions and speculations, but we better read the fine print of Hindu Rashtra before clamouring for it.