The flare-up in Yemen

West Asia is on the boil, literally. 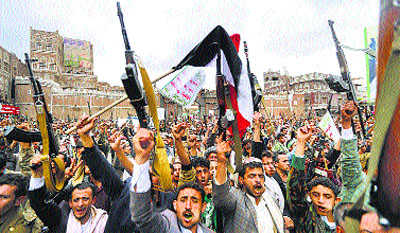 West Asia is on the boil, literally.  The events surrounding Yemen, which exploded within the past 48 hours, have been building up for much longer.  What was a local, civil war has morphed into a full-scale regional war, with major participation from extra-regional powers, thus making it an international conflict. In the meanwhile, the Syrian and Iraqi war theatre continues unabated, without any hope of an early end.

In an article published in a leading English daily almost exactly four years ago entitled ‘The New Great Game in West Asia’, this writer had anticipated the Shia-Sunni conflict as the major, perhaps defining , feature of West Asia; many analysts thought  I was over-reading the situation.  The Shia-Sunni feud is as old as Islam itself. At various periods in history, it has lain dormant or become explosive; it never disappeared and will not, ever.

The Shia-Sunni tensions became acute after the Islamic revolution in Iran in 1979, but the Iran-Iraq war of 1980-88 kept them in check for a while. The tensions were rekindled with the American invasion of Iraq in 2003. History alone will tell us whether this was an intended or unintended consequence of that illegal war. The years 2006-8 witnessed a bloody Shia-Sunni civil war in Iraq, causing tens of thousands dead among both communities.  The feud got a big shot in the arm with the outbreak of the civil war in Syria. While the principal objective on non-regional powers in the Syrian imbroglio was to damage Iran's clout by getting rid of the Assad regime, the regional players were mainly motivated by sectarian considerations; they wanted to replace the minority Alawite-Shia regime by a Sunni dispensation. The Syrian conflict, like the one in Yemen now, is simultaneously a civil war, regional war and an international conflict.

In the case of Yemen, two of the players, Saudi Arabia and Iran have extremely vital interests. Saudi Arabia in particular feels, with justification, directly threatened. The forced ouster of its chosen leader, Mr. Hadi, who has now taken shelter in Saudi Arabia, by the Shia Houthis, with undoubted encouragement and strongly suspected direct help from Iran, is regarded as a direct threat to the kingdom. If Yemen comes to be controlled by the Houthis, and hence by proxy by Iran, the Saudi state will feel threatened, particularly in its eastern region which is predominantly Shia and where much of the kingdom's oil wealth is concentrated. Add to this the fact that the Saudi regime for the most part of its history has grossly discriminated against its Shias, and the concern of the Saudis  is understandable.

Saudi Arabia has cobbled together a Sunni coalition of nine countries for airstrikes against Yemen: Saudi Arabia, Qatar, Kuwait, Bahrain, UAE, Jordan, Egypt, Morocco and Sudan. A significant omission in this list is Oman which tends to follow a line independent of the Saudis for its own reasons. It is reported that Pakistan is actively considering joining this alliance. The US, always an indispensable power in West Asia, is furnishing logistic and intelligence support, indicating that it has been closely involved in this operation. The Saudis have declared that they will take any and all steps necessary to restore Hadi to his throne in Sanna. In the UN Security Council lingo, this would be 'take all necessary measures'. The Sunni coalition has categorically stated that ground intervention is not ruled out. Pakistan has been approached in this regard.

If the US is involved, can Russia and China remain far behind? The Iranians have condemned the Saudi ‘aggression’; they have called for a political solution to the Yemen conflict, but one can be confident that they too will be contemplating 'all necessary steps' to protect their protégés. It will be interesting to watch the stance of the government in Iraq which is Shia dominated and very close to Tehran but which is heavily dependent on America and other Sunni Gulf states for the struggle against the Islamic State. One will not have to wait long for Baghdad's policy in this rapidly evolving situation. Can Iraq afford to alienate either of its vital supporters in what is a crucial conflict for both?

The matter will come up before the Security Council before long. Battle lines will be drawn along the Shia-Sunni divide as well as between the protagonists in the renewed, though not yet all out, East-West cold war. China will condemn or deplore ‘interference in the internal affairs’ and along with Russia oppose any action aimed at authorising member states willing to do so to use ‘all  necessary measures’. The Horseshoe Table will witness harangues on all sides. In the meanwhile, innocent civilians will continue to be killed.

The Yemen crisis, unlike the Islamic State crisis, might have impact on the US-Iran talks on the nuclear issue and has already led to an increase in the price of crude; thus it has  global implications.

According to some diplomats from the region based in Delhi, Mr Obama has approached PM Modi to join the alliance against the Islamic State in some form. The same diplomats also believe that the recent visit of the Emir of Qatar also had the same objective. The events in Yemen will surely increase the pressure on India ‘to do something’ to join ‘this common threat’. India had displayed  wisdom in 2003 under Vajpayee's leadership and decided against joining the  coalition against Iraq, even though the Americans had pressed us hard and there was a great deal of support for the idea within our establishment. No doubt, the present NDA dispensation will display the same wisdom.  As one West Asian diplomat from an important country told this writer, it would be best for India not to get dragged into the ‘Middle East mess’. There are some among the strategic community who advocate India walking the talk about India being a major power regionally and globally. India is not such a power nor ought we nourish such ambitions for quite some time. The best option for India, as was mentioned by this writer four years ago, is to remain agile and practise non-alignment in the present context, and confine ourselves to pledging support for a political solution.

The writer is a former Indian Ambassador to the United Nations, was, until recently Prime Minister Manmohan Singh’s Special Envoy for West Asia