THERE are some positive signs and many negative portents of a Russian-American détente in world politics appearing through the eight-week period of the Donald Trump presidency. 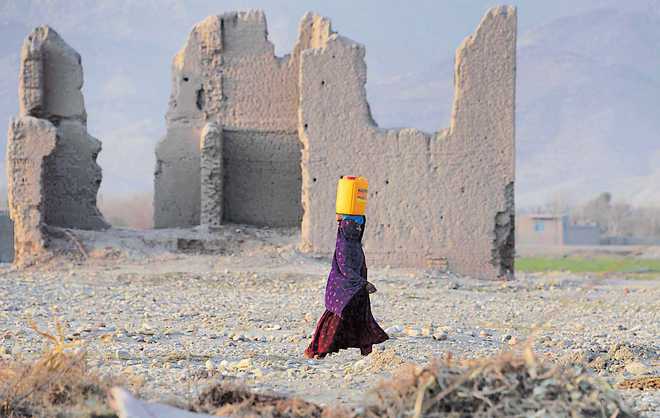 FRAGILE: Any outright takeover by the Taliban will lead to another protracted civil war.

THERE are some positive signs and many negative portents of a Russian-American détente in world politics appearing through the eight-week period of the Donald Trump presidency. I2n the frenetic rush of current history, we fail to take note of nascent processes, only to grasp with hindsight that the kaleidoscope had inclined ever so slightly, causing a shift in the symmetrical pattern. To be sure, the security of the Greater Middle East — arc stretching from the Levant to Central Asia’s steppes — hinges on the extent to which US-Russia cooperation becomes possible. However, any new policy direction toward Russia on the part of the Trump administration can only crystallise at a glacial pace.

Syria beckons the future of US-Russia détente. Politics is a seamless web. Progress anywhere makes progress everywhere more likely. Any Russian-American cooperation to fight terrorism in Syria may inevitably “spill over” to Iraq — and, almost unavoidably, to Libya — and, perhaps even to Yemen. Can Afghanistan be far behind?

Trump has shown sensible aversion toward committing good money to kick-start a dubious second “surge” in Afghanistan – this time around, without a timeline, until the war is won. He underscored in his address to the US Congress recently that the $6 trillion Washington spent in the Middle Eastern wars was bad money wasted, which could have rebuilt America twice over. It stands to reason why Trump is taking time to announce US’ new Afghan strategy, despite persistent urgings from the military that the stalemate in the war may still be broken, if only with a final push.

Indeed, the most desirable outcome in the Afghan war that is realistically possible today will be a power-sharing arrangement in Kabul that accommodates the Taliban in a spirit of reconciliation. No one doubts that the Taliban is an authentic Afghan movement. Russia is a stakeholder in preventing ISIS cadres fleeing Syria and Iraq from flocking to Afghanistan. President Vladimir Putin recently undertook a tour of frontline states in Central Asia where Russian bases are in standby mode. Russia keeps contacts with the Taliban and is improving relations with Pakistan. China too has had contacts with the Taliban and wields considerable influence on Pakistan. Vital Chinese interests are at stake. The ISIS recently threatened to create rivers of blood in Xinjiang.

Meanwhile, a bold idea is struggling to be born in the regional and international discourses — trilateral US-Russia-China cooperation and coordination to resolve regional and international problems. It has figured with increasing frequency in the Russian and Chinese discourses, which cannot be coincidental. It has Trump as the audience. The Chinese foreign minister Wang Yi fuelled this idea at a press conference recently on the sidelines of the National People’s Congress in Beijing: “In the new era, the China-US-Russia relationship should not be a ‘seesaw’ game. The three countries should work with, rather than against, one another and pursue win-win, rather than zero-sum, outcomes.”

A US-Russia-China joint effort is just what is needed to end the Afghan war and create a new regime in Kabul that gives due role to the Taliban in the governance of their country. This is no longer a zero-sum game. Any outright takeover by the Taliban in Afghanistan will lead to another protracted civil war and it can be apocalyptic in outcome, resulting in the withering away of the Afghan state, and anarchical conditions posing long-term threats to outlying regions. Equally, given the hugely controversial record of western hegemony over Muslim Middle East, which engendered a deep sense of humiliation in the Muslim psyche, open-ended US military presence in Afghanistan will provoke resistance and, in turn,  strengthen the extremist Islamist groups in the region. In immediate terms, no one knows how to salvage the government in Kabul, which was a creation of the Barack Obama administration. The fragmentation of Afghan polity is touching the terminal stage, and, alas, Trump has proclaimed his profound distaste for ‘nation-building’ anywhere expect in America itself.

On the other hand, the Taliban takeover in Kabul and ensuing anarchical conditions in Afghanistan will put intolerable strains on Pakistan’s own resources and deflect it from the unique opportunities that the China-Pakistan Economic Corridor offers it to make good as a prosperous country. To be sure, if the Taliban continues with its war of attrition against foreign forces and begin advancing from the countryside into the urban centres in a conceivable future, it may become futile to try to stop the insurgents on their track. After that, what? Pakistan lacks the means to bankroll a Taliban regime.

On the other hand, a few thousand additional western troops cannot break the current stalemate. Are there any volunteers to undertake a “surge” of 50-1,00,000 troops and wage an open-ended campaign without a timeline — and, yet, victory far from assured? Clearly, big powers have a crucial role to encourage Pakistan to bring the Taliban to the negotiating table. What needs to be worked out is the calibration of the legitimate interests of Pakistan, while ending the Afghan war — quintessentially, a government in Kabul that remains sensitive toward Pakistan’s concerns and interests.

However, for that to happen, a grand bargain is needed at both the regional and international level. At its core, there is a complex three-way entanglement at the regional level involving Pakistan, Afghanistan and India, which provides fodder to the hydra-headed beast of terrorism. All three countries are in denial mode. Unless they can be brought within a single tent and made to cohabitate peacefully as benign neighbours and responsible regional states, peace will elude Afghanistan. The big powers can play an influential role here. Unless there is a holistic approach toward “reset” of the complicated regional calculus, endeavours such as the Afghan-Pakistan meet in London last Wednesday, brokered by the UK with US concurrence, to address terrorism problem in bilateral terms cannot produce enduring results.

On the contrary, a big-power effort remains predicated on their readiness to work together. Russia and China, which have huge stakes in regional security, are eager to work with the Trump administration to stabilise Afghanistan, but indications are that Pentagon prefers to handle the war the John Wayne way. Alas, this “lone-ranger” mentality may serve the corporate interests of the US military-industrial complex, but it can only spell doom for peace and stability in the region. The onus is on Trump to read out the script to the Pentagon. Will he? Trump’s summit meeting in April with Chinese President Xi Jinping offers the opportunity to initiate a historic concert of big powers over Afghanistan.