The lost art of water architecture

The water future of the world is sea. Rarely a day passes without the word water appearing in print with descriptions concerning it in hysterical tones. 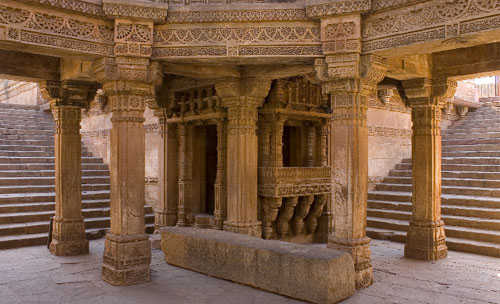 The Adalaj stepwell is at once a celebration and a tribute to water as well as a record of the society in which it was built. photo: Cyrus Mobedjee

The water future of the world is sea. Rarely a day passes without the word water appearing in print with descriptions concerning it in hysterical tones. Each year we are inundated with reports on water in all its various aspects with phrases like “water entitlements”; “communitarian ideal”; “financial sustainability”; “accountability, competition and regulation”; “public good, waste water treatment and participatory management”. When the fantastically self-absorbed and narcissistic human race starts speaking in such tones, one can be sure that the crisis of water is already upon us. This is so because humility has never been an option and in the matters of the ‘Blue Gold’, the guilty party for the current scenario is the ‘civilised’ human race. It is a sombre reminder that civilisations come to life because of water and cease to exist without it.

There are a million wars, small and big, going on for water on the face of the earth at this very moment. For all those grand pledges to declare water as a human right, astounding inequalities remain across the world in the matter of water—between urban and rural areas and between the rich and poor. Almost two billion people in the world do not have access to clean water.

According to Bertrand Russell, each generation perceives itself being at the apex of intelligence and this attitude prevents it from being interested in the thoughts and feelings of its ancestors. In the delicate matter concerning water, when billions of people do not have access to it, not only each drop of it counts but also all the past knowledge systems about its storage, conservation and distribution would add to man’s capacity to deal with it in a better manner.

The step-wells  constructed all over northern India in the middle ages and right till the modern period are a repository of knowledge about water collection, storage and distribution in water starved areas. In Gujarat, this tradition of constructing   a stepwell was raised to a stunning architectural art that stands today on the world stage of architectural heritage.

Future in the past

Since Puranic times, building a water body or donating money to have one constructed has been  considered to be an act of punya, a good deed. The rock edict of Rudradaman at Junagadh in western India, inscribed in 150 AD, speaks about the Sudarshan lake of Junagadh, built originally by the great Mauryan emperors. This edict, written in Sanskrit, is the oldest such edict extant in India. The edict notes the reparations done by Mahakshtrap Rudradaman on the Sudarshan Lake. Three hundred years after Rudradaman’s inscription, the edict of Skand Gupta also speaks about the reparations conducted by the Gupta king in 455-456 AD, showing how important was the matter of water, both for the people and the king who ruled them. The more than 5,000-year-old Indus Valley civilisation is justly famous for its technological sophistication in preserving water.

Hindu mythology is replete with stories about lakes and ponds and kunds. According to one such story, Lord Vishnu with his own hands dug the Manikarnika kund of Banaras. This kund is considered so sacred that it is believed that during afternoons, all other sacred kunds of India come here to take a holy dip. There are similar stories about the Mandakini lake of Mount Abu.

The unique underground architectural marvels called stepwells have been constructed in Gujarat since the ancient times. This underground construction, peculiar to the Gujarat region (except for southern Gujarat) was the outcome of the hot, arid climate and the paucity of water available for human and animal usage in the region. These stepwells celebrate water, its conservation and take the architecture of the region to a highpoint. There are stepwells with architectural wonders in towns of Gujarat like Patan, Jhinjuwada, Viramgam, Vadhvan, Sarsa, Dhadhalpur, Chobri, Anandpur, Gondal, Virpur, Jetpur and all the way to the coast of Somnath. Among the “water shrines" in Gujarat, the stepwells of Adalaj (near Ahmedabad) and the Ranki vav of Patan (the old Solanki capital in the north of Gujarat) are the supreme examples of stepwell architecture.

A goddess called “Varudi Mata” is believed to reside in the stepwells, she is believed to be the goddess of fertility and is also worshipped for granting good crops. These stepwells or rather "stepped wells" (as such a stepwell was accessible through steps), known as vav in Gujarati, were always built on the caravan trade routes. The Gujarati word for the step-well, vav, is derived from the old Sanskrit word vapika; the oldest existing step-wells in Gujarat are Zilani (550 A.D.) and Manjushree (650A.D.) are in the Saurashtra region. These great subterranean water structures provided the travellers and their animals with rest and water on their journey on the trade routes. The vavs also became religious places because of the sacredness associated with water, apart from simply resting and meeting places, and in times of wars and insurrections, they also became hiding places.

It is clear that the multitude of step-wells form an important part of building activities of Gujarat of the pre-medieval and medieval periods. They also clearly reflect the development of architectural and sculptural styles and iconographic schools, as can be seen in the chronology of the temple architecture of the region. Stepwells are monuments, of which the major parts are underground, resembling subterranean temples. In most cases they are richly carved and ornamented with decorative relief work and sculptures. A stepwell consists of three architectural parts, the vertical well; the stepped corridor leading down several storeys and numerous intermediate pavilions.

The stepwell of Adalaj, built on the main caravan route of Ahmedabad and Patan (the then capital of Gujarat), was commissioned in 1499 A.D. by Rudabai, the widow of a Rajput noble Veer Sinh Vaghela. This stepwell is a magnificent example of the fusion of Hindu craftsmanship and floral, geometric patterns of the Islamic architecture. All the five stories of the Adalaj structure use cross beams all along their lengths. This step-well, of the type of the three-faced "Jaya stepwell", is built according to the classical manuals of Hindu architecture. It is a mesmerising procession of Arabesque designs, decorated columns, ornamental balconies with exquisite carvings, carved walls and niches with shrines of Hindu gods and goddesses, elephants, flowers, birds and chhatris all through its five floors of length and breadth underground. The octagonal spaces unfold in front of the eyes while the steps take one to the circular well.

The Adalaj stepwell is 75.3 meters in length and is laid out in north-south direction. The well is in the north and the entrance is in the south direction. The three entrances meet in the first storey underground in a huge square platform. This platform has an octagonal opening and rests on 16 pillars. The four corners of the platform have four built-in shrines. The stepped corridor begins from this square platform and descends for five storeys. The pillars of the Adalaj stepwell are of the “bhadrak” type (square with recesses). Apparently, Akbar was so impressed by the columns of Adalaj that they are seen to be almost replicated in the architecture of Fatepur Sikri; Adalaj is also described as a “pillared garden”.

The niches at Adalaj stepwell are either filled with lotus medallions or with a depiction of the great goddess. The great goddess is represented by her vehicle (vahana in Sanskrit) — the lion who carries a trishula (trident). This trishula could be interpreted as symbolising the goddess.

The Adalaj stepwell is at once a celebration and a tribute to water as well as a record of the society in which it was built. One can only marvel at the organisational capacity needed to erect such a structure. Some niches have leafy branches that resemble the decorative aspects of some of the Ahmedabad mosques known for their glorious weaving of the Hindu and Muslim styles. An inscription in a niche declares that this stepwell of Queen Rudabai will stand as long as there will be sun and moon in the sky. Here, the string-courses run on  pure beauty; the embellishing of all parts of the structure here is just a pretext to create further beauty in stone. Each wall is a procession of divine sculptures; each panel  creates the impression that this architecture was not created by the human hands but rather with some divine power from the skies had gently lowered it on the surface of the earth.

The Rani ki Vav, or the Ranki stepwell, located within two kilometres of today’s Patan in the north of Gujarat is an incomparable example of the Solanki architecture which is why it is also known as the “Queen of Stepwells.” It was commissioned by the Solanki King Bhimdev’s (1022-1063 A.D.) wife Udaymati in 1063 A.D. This colossal 64-metre long, 20- metre wide and 27-metre deep stepwell has a touch of the beatific in its architecture, which is why it is an ornament of the world architectural heritage.

There are literally forests of ornamented columns here, and gardens of sculptures of gods and goddesses, balconies and carved entrances that seem to lead to the heavens. This stepwell also gives a glimpse of the classical Hindu architecture of the previous centuries and the mastery of the technique and materials that the artists and architects had achieved in their craft. It was due to the great efforts of the Archaeological Survey of India that this stepwell, which remained buried for almost 800 years in mud, was excavated for the world in the 1980s. These vavs are the jewels woven into the fabric of civilisation by the passing time. They are also a testimony to how the medieval western India dealt with the ‘Blue Gold.’ Are we learning some lessons from these temples of water?

— The writer is an independent researcher and writer.